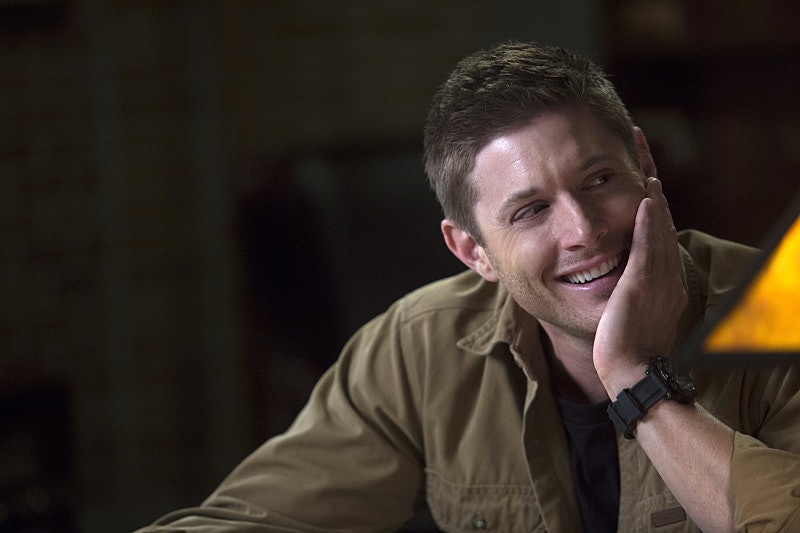 How are you ringing in the new year? Will you be celebrating New Year's with friends and family? Most of us will be, and the same goes for those beloved Winchester brothers on Supernatural . Who knows if they'll have the time for parties (I have the utmost confidence Dean will find someone to kiss at midnight) between hunting demons and Sammy trying to save Dean from that pesky Mark of Cain? But there's no doubt that Sam and Dean Winchester will be together when 2014 ends and 2015 begins — that is if they're both alive.

During their rare down time, one thing these brothers might have time for is making resolutions for next year. Let's face it, Sam and Dean could use a year without worrying about one another or trying to save each other or hunting all things evil — hopefully, 2015 will be the year for that (we all know that's not going to be the case or there wouldn't be a show, but we can pretend).

It really doesn't take that much time or thought to decide how you want to make the next year even better — or less bloody, if you're a character on Supernatural. So, why not use our imaginations and come up with some resolutions for some of our favorite living characters on the hit CW series? Here are 11 New Year's resolutions to help these hunters, angels, demons, witches, humans, cops, and werewolves have a less gruesome 2015.

Dean: Get Rid of the Mark of Cain

Dean gave into the Mark of Cain and now he's probably going to want to slaughter anyone who gets in his way. The best way to stop that? Get rid of the mark, stat. Dean will most likely need help with this resolution seeing as the mark makes him thirsty for blood, which means Sammy will have to guide him.

Sam: Save His Brother

As we saw at the end of Season 10's midseason finale, killer Dean is back and now Sam is even more worried for his brother. He better follow through with wanting to save his brother or the Winchester bros might not be sharing anymore bro-hugs.

As sweet as it is to see Castiel's more human side, especially around Jimmy's daughter Claire, there's no way Cas can be a father to her. Not only is he an angel trying to follow his angelic duties, but Claire would not be safe around Cas' everyday lifestyle. He should either find her a nice family or ensure her safety, which I have no doubt he will do.

Add demon Crowley and witch Rowena to the long list of complicated mother/son relationships. As much as I want to see these two go head-to-head (now that'd be a battle!), for a less gruesome future Crowley should try and make up with his mother and not hold a grudge. However, if they do find solace, they might just partner up, resulting in an even more dangerous duo. Let's face it, when Crowley's involved, bodies pile up.

Now that Cain is returning to Supernatural , he can vow to help Sam save Dean and give advice on how to get rid of the Mark of Cain. As we all know, Cain isn't really the caring and helpful type, but if he doesn't help them, then there's no doubt Sam will do whatever it takes to force him. Yeah, helping rather than objecting would cause much less bloodshed.

Sheriff Jody Mills is one tough woman who never backs down to any supernatural case. Seriously, I wouldn't want to be on her bad side. However, after losing both her child and husband, Jody's life hasn't been the happiest. Even though she is now a mother-figure to Alex, it'd still be nice to see her find some happiness, which might just mean less killing and more loving.

A world without Metatron is a better and happier world for everyone, right? He needs to stay in Heaven's prison, think about his actions, rot away, and, eventually, everyone will forget his name and that he ever existed. The perfect punishment — and resolution — if I do say so myself.

As much as I love Charlie and her badassness, she's probably better off in Oz fighting evil with Dorothy. There's no doubt she can handle the trouble that comes along each time she visits Sam and Dean, but she might fare better in the Emerald City.

Garth: Focus on His Family

Now that Garth is a werewolf, married, and focusing on his family, aka his pack, rather than hunting, he's already leading a less gruesome life than Sam and Dean. He should stick to that path and not get sucked back into the hunting life. Who would've thought Garth would find love and have a family? Party on, Garth!

Rowena: Bond With Her Son

Rowena swears she loves her son, but she still somewhat manipulated Crowley the last time we saw them. Now, does she really want a relationship, or is she using him? Whatever the case, the two would probably be better off trying to get along rather than going at each other's throats. However, as I stated above, the two working together might cause some major harm. Imagine the King of Hell and a powerful natural-born witch running the Underworld. Like Crowley, Rowena can't help but cause a bloody mess.

Donna: Stay Away from the Winchesters

With the Winchesters comes a supernatural mess, which Sheriff Donna Hanscum is now privy too. She'd probably be happier fighting all that crime in Minnesota and avoiding the demons, vampires, and every other creature Sam and Dean encounter on a daily basis. I'm sure she's looking forward to 2015 without having to chop off vamps' heads, even though she was a badass doing it.