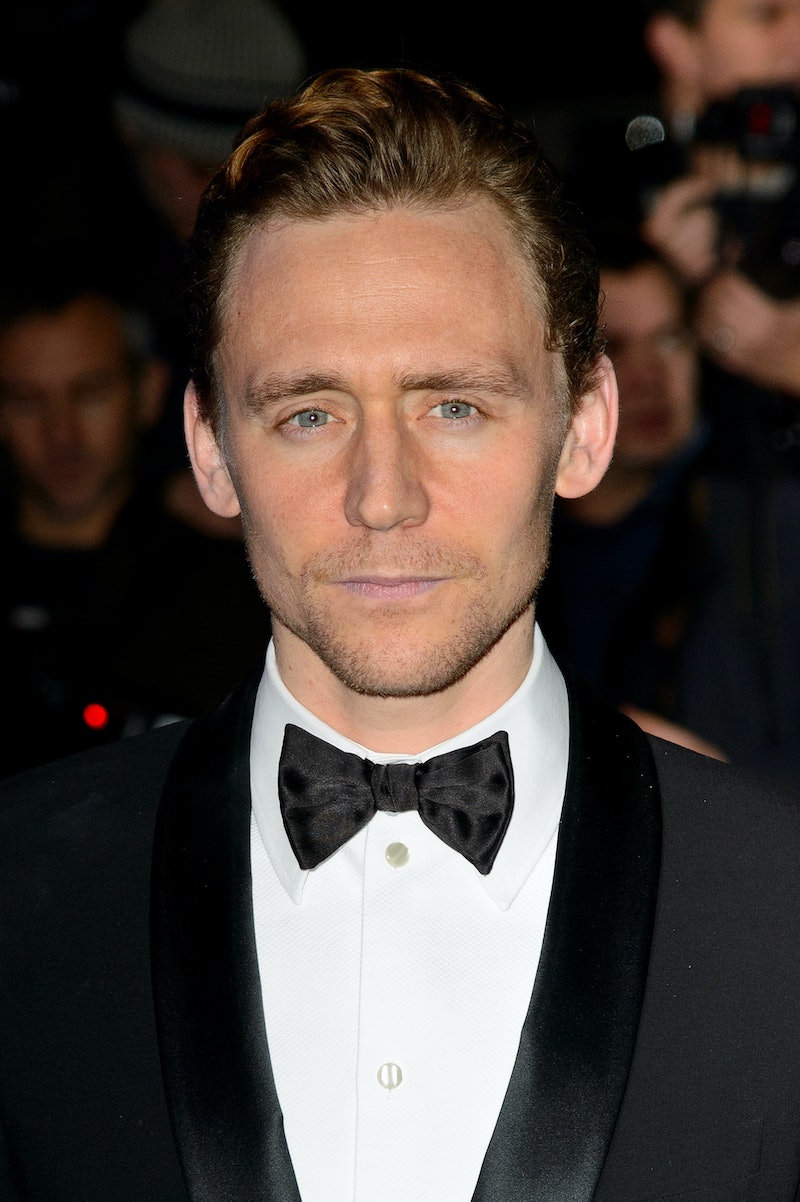 It's the great unsolved mystery: what color are Tom Hiddleston's eyes? That's the kind of thing that should be pretty straight forward, but it's a question that's plagued Hiddlestoners for years. The confusion started when his agency listed the actors eyes as green despite the fact that they often appear blue. The uncertainty continued when a few Tumblr users proposed a theory about Hiddles' changing eye color saying it was a plot point in The Avengers.

Known as the "tesseract theory" it suggests that Hiddleston's eyes appear blue in the scenes of the film where he's overcome by the tesseract's power, and that they change back to green after Thor tackles him to the ground and supposedly releases him from the control of the scepter. Tumblr user tomhiddles wrote at length to explain the theory.

In The Avengers his eyes are blue because of his scepter. The same happened with Hawkeye. Loki was very vulnerable when Thor smashed him on the floor. He had a few moments of lucity, just like when Natasha slapped Hawkeye. Thor asked Loki to look around and see the damage he caused, asking to help him ... Then his eyes became green.

It's a theory many fans support because it aids in the idea that Loki isn't inherently evil, he was just possessed by this scepter and acting in a way that was beyond his control. Tomhiddles also included various GIFs of Loki's supposed changing eyes after Thor talked to him. The photographic evidence lead many to believe that Hiddleston's eye color in the film was not naturally that blue and threw more doubt around about the true color of his irises.

But still other users believe that those GIFs were photoshopped. One in particular took the time to pull the DVD stills of the scene to show that the eyes are never that electric blue and never that startlingly green. Any change in lightness or darkness is most likely a result of camera angle or lighting and they look pretty similar despite the supposed breaking of the tesseract connection.

So Hiddleston's eyes probably aren't electric blue, but they might not be green either. So what color are they? Most likely Hiddleston's changing eye color is a result of what he's wearing. Dr. Ivan Schwab spoke about the occurrence with the Wall Street Journal and said that when you look at someone's eyes, the color you see is influenced by the colors around it. "If I wear a shirt that is complementary, my eyes may appear to be a different color, but the wavelength is the same," Schwab said.

Essentially that means when Hiddleston wears blue, his eyes appear more blue and when he wears green they take on more of that color. But really, when trying to find a solution to Hiddles' eye color mystery, you can't turn to Tumblr GIFs and assume they haven't been enhanced. You can't even 100 percent trust his agency and the notation that they're green. There's one person whose opinion means more than all the others, and that's Tom Hiddleston himself. So what color eyes does Hiddles think he has? Blue.

Speaking to Entertainment Weekly last year, he confirmed what many had always thought (emphasis mine). "In making [Loki] with this raven black hair and blanching my face of all color, it changes my features. Suddenly my blue eyes look a lot bluer, which lends a severity to my face."

So there you have it. Hiddles eyes may change depending on what he's wearing, but at the heart of it all he has blue eyes, and he said so himself. But even if you're not convinced, there's one thing no Hiddlestoner can deny: Hiddleston's eyes are gorgeous no matter what color they are.

More like this
Olivia Wilde Addresses *Those* Florence Pugh & Shia LaBeouf Rumours
By El Hunt and Sam Ramsden
Paul Mescal, Man Of Mystery
By Samantha Leach and Heather Hazzan
Morfydd Clark’s Party Trick Is Only Impressive To “People Outside Of Wales”
By L'Oréal Blackett and Maxine Harrison
Maxim Baldry Plays This Pivotal Role In 'The Lord Of The Rings' Universe
By Maxine Harrison
Get Even More From Bustle — Sign Up For The Newsletter