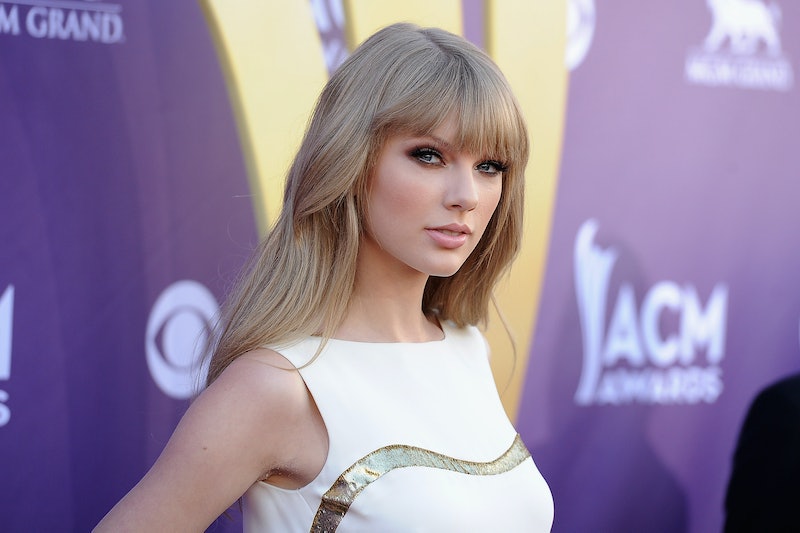 Unlike past years, Taylor Swift made tons of headlines in 2014 that had nothing to do with who she's dating. Instead, she's being recognized for her huge musical success — as she should be. In fact, Tay swore off guys this year, making the decision that she'd rather be single. While I give her props, other people are trying to give her love advice. In a video interview with People, Patti Stanger, aka the Millionaire Matchmaker, dishes love advice for Taylor Swift. While the video is amusing, it's also rather disappointing. Dare I say it's a bit "anti-feminist"?

When it comes to Tay's love life, everyone has an opinion and Stanger is no different. I totally get that it's her job as the "Millionaire Matchmaker" to comment on people's love lives, but her comments about Swift are iffy. Right off the bat, she says:

I think she's going about it all wrong. Stop dating rockers and musicians and even producers of musicians... If she continues to date these rocker types and write music about them, no one is going to want to date her.

Instead, she suggests Tay looks beyond Hollywood and finds a nice businessman from Silicon Valley, whose smarts match her own. That is a valid point, considering her bestie Karlie Kloss is dating entrepreneur Joshua Kushner. But at the same time, who's to say musicians don't match Swift's business-savvy smarts? As for the reasons she belongs with a businessman, Stanger says, "She's very bright and she's domestic. She loves to cook." Oh yes, because all men need a woman to cook for them!

The commentary only gets better (I'm being sarcastic) when Stanger says that men are intimidated by Swift because she's too much to handle. As if all of her great qualities are overwhelming and ward off men, Stanger explains:

I think a lot of people are afraid of her. She's a tall drink of water. She's drop-dead gorgeous. She looks like a supermodel. She's brilliant as could be and she's a business woman... She was a nerd in high school that no one wanted to befriend because she was writing this great music.

Yiiiikes! In other words, it's like saying Taylor will struggle to find true love because she's too smart, successful, and good-looking — which not only is a backhanded compliment to her, but pretty insulting toward men as well. She's essentially saying women can't have it all, because otherwise it scares away men. And referring to her as a nerd in high school? Unnecessary.

Luckily, I can predict how Tay will respond to this advice...

As Swift proved with "Blank Space," she doesn't let the public's opinions about her love life phase her. If anything, it's just fuel for future music videos.

To see the Millionaire Matchmaker's commentary for yourself, check out the video below:

More like this
Everything To Know About Taylor Swift’s 10th Studio Album, 'Midnights'
By Grace Wehniainen and Jake Viswanath
Kanye West Apologizes To Kim K "For Any Stress I Have Caused" In Rare Interview
By Jake Viswanath
Adam Levine Denies Having An Affair — But Admits He “Crossed The Line”
By Jake Viswanath and Radhika Menon
Twitter Is Freaking Out Over Rihanna’s 2023 Super Bowl Halftime Show Announcement
By Stephanie Topacio Long
Get Even More From Bustle — Sign Up For The Newsletter