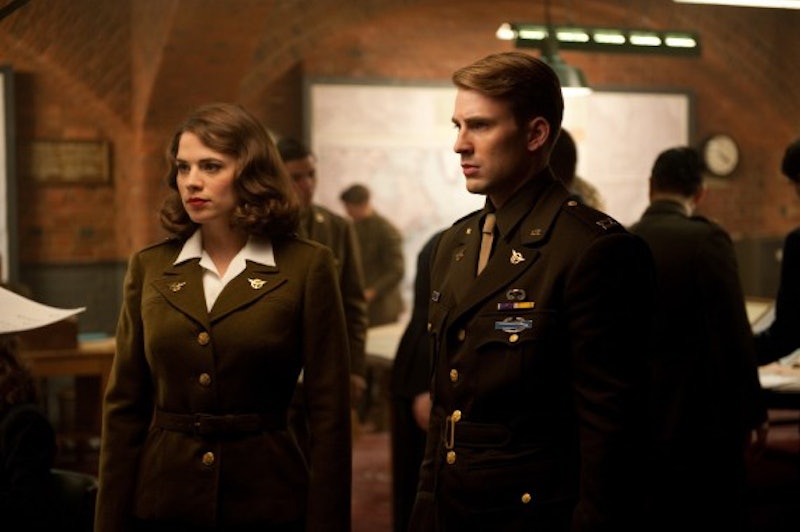 Agent Peggy Carter is one of my most favorite Marvel heroines, and the fact that she's coming to the small screen calls for a huge celebration. Hayley Atwell reprises her role from Captain America: The First Avenger and Captain America: The Winter Solider to take on the badass gal who's one of the founding members of S.H.I.E.L.D. But what about Peggy's main squeeze, Steve Rogers, aka Captain America himself? Peggy's coming to TV, so Cap shouldn't be too far behind, right? Is there a chance that Captain America will make an appearance on Agent Carter ?

If by some chance you've been frozen in ice for the past few decades, let me bring you up to speed about the romance between Peggy and Steve that never was. At the end of First Avenger, Steve plunges into the arctic with the tesseract, sacrificing himsel and basically leaving everyone to presume he's dead — but hey, at least the tesseract is gone. The movie's end shows Steve waking up in the present day, some 60 years later. When we see Peggy in The Winter Solider, she's a much older woman, having aged 60 years while Steve managed to keep his youthful physique, thanks to that super soldier serum. They never went on their date, the one that's discussed before Cap "dies."

Where in the timeline does Agent Carter fall, anyway? Considering the fact that Agent Carter takes place following the events of First Avenger but before Winter Solider, it's safe to assume that we sadly won't ever get a glimpse of Chris Evans and his chiseled jaw and perfect six pack.

And yes, this is a huge bummer for so many reasons, and I bet Peggy's just upset about it as fans are.

Not only that, but Agent Carter executive producer Michele Fazekas told Entertainment Weekly that the entire series takes place after First Avenger but before the events of Marvel's One-Shot: Agent Carter .(Which if you haven't checked out, WHAT ARE YOU WAITING FOR? It's included on the Iron Man 3 Blu-Ray release. Also, it's here.) So we won't ever get Captain America or S.H.I.E.L.D., and as Fazekas explained, what happened in the "One Shot is the end of the series."

Agent Carter is only going to be a limited 8-episode run, so its doubtful that we'll get any huge surprise guest stars — and we would have been clued into them by now. Even Dominic Cooper, reprising his role as Iron Man's dad, Howard Stark, is only slated to appear in one episode, per IMDB. So if you're tuning in for the hopes of Captain America suiting up and sweeping Agent Carter off her feet, you're out of luck. He's still very much MIA in this Marvel Cinematic Universe.

Of course, there will probably be at least one flashback to Captain America, reminding us just how perfect Steve and Peggy were together and how tragic their story is. At least we'll always have First Avenger.