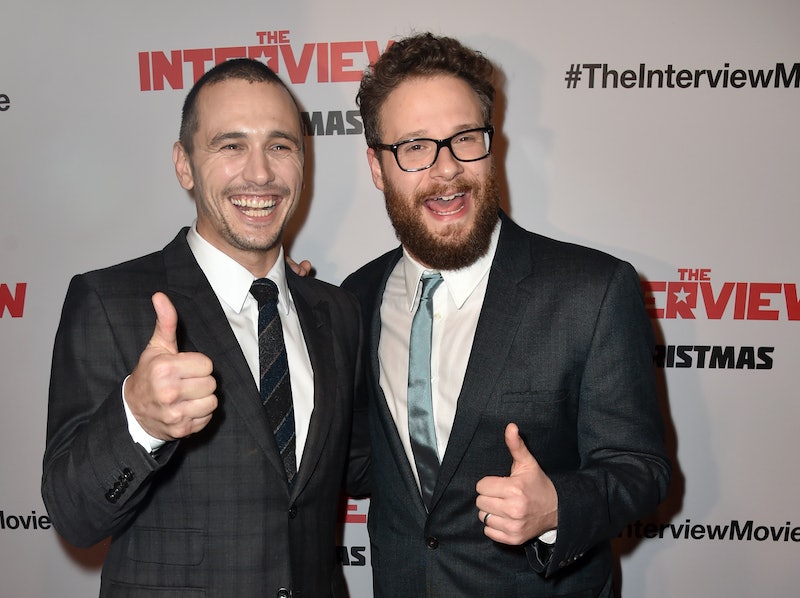 If you're an Apple loyalist who's been dying to see The Interview without trekking to one of the independent theaters that are are actually showing the movie, I have good news for you. As of Sunday, December 28, The Interview is officially available to purchase or rent on iTunes, which means it's time to sit down in front of your Apple TV or iPad and enjoy the most controversial film of the year in the comfort of your own home.

It's relatively inexpensive, too — Renting is just $5.99 (the same as what YouTube, Google Play, and XBox are charging), or it can be yours forever for $14.99. Even if the movie doesn't live up to the high expectations all of the publicity surrounding it over the past few weeks has created, nothing makes me feel quite as patriotic as I do when I sit down to watch a Seth Rogen comedy that hackers previously told me I couldn't. In fact, it makes me want to go out and get one of those tiny American flags to glue Rogen and James Franco's faces on and wave it around, and this is not an activity I'd usually be interested in participating in.

So why did iTunes wait until now, instead of releasing the digital version of The Interview on Wednesday along with everyone else? They haven't given any particular reason, although Recode hypothesizes that it could be because Apple wasn't interested in playing along with Sony's seemingly snap decision to make the movie available less than a week after deciding to pull it from theaters altogether. Considering how exact Apple is with all of their business decisions, it wouldn't be surprising if that logic were true.

Although streaming numbers have yet to be released, The Interview did manage to bring in $1 million in ticket sales when it was released in 300 theaters on Christmas Day. Not too shabby for a movie that almost didn't make it into any kind of theaters whatsoever, right?

More like this
Everything You Need To Know About ‘Black Panther: Wakanda Forever’
By Bustle Editors
Christian Bale Sang With Taylor Swift & His Daughter Can't Believe It
By Radhika Menon
Rita Ora Celebrates Finding Her "Fairytale" Ending With Taika Waititi
By Sophie McEvoy and Catharina Cheung
Kanye West Apologizes To Kim K "For Any Stress I Have Caused" In Rare Interview
By Jake Viswanath
Get Even More From Bustle — Sign Up For The Newsletter