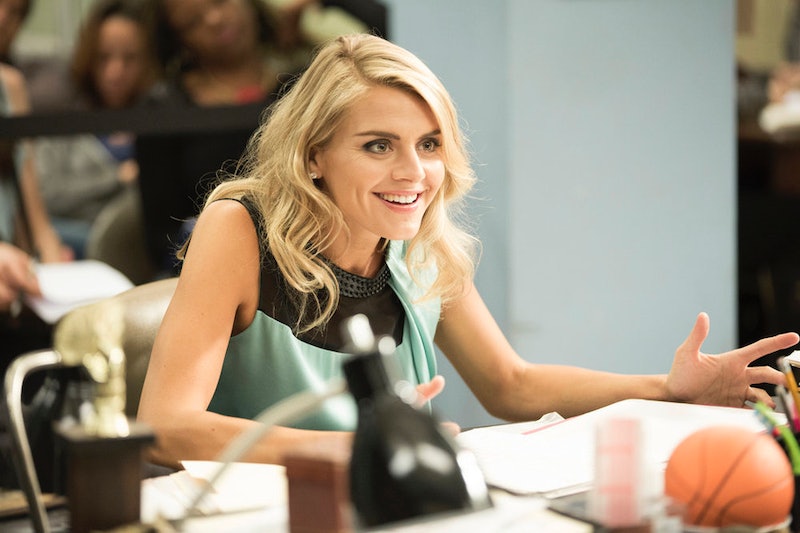 Tuesday night brings about the final two episodes of USA's Eliza Coupe driven half hour comedy, Benched. Like all shows on the eve of their first season swan song, they have to be wondering if they'll be graced with a second season — that's the goal for any TV show, right? The show follows the quirky and zany story of Coupe's public defender, Nina Whitley, after her fall from grace as a very powerful lawyer. And she almost has it all together. But, is she together enough to get Benched renewed for Season 2? That really all depends if USA is willing to take a chance on a half hour sitcom again. And so far, the odds don't look to be in Benched's favor.

First off, it's never a good sign when suddenly a network decides to air two episodes back to back during the holiday season — originally Episode 9 and 10 were slated to air weeks apart, but both ended up airing on December 23. The same thing happened with the last two episodes of the season, Episodes 11 and 12. The show was set up to run right into the beginning of January, but suddenly we were getting two Benched episodes every Tuesday. While, yes, that benefits fans like me because it means we don't have to wait another week for another installment, it's also usually a telltale sign that a network is trying to get rid of a show quickly. Benched's creator, Michaela Watkins, doesn't sound too optimistic about it either:

Questioning Benched's Season 2 fate brings back fond memories of that time we waited approximately 45 years for USA to renew Playing House (OK, it wasn't really 45 years, but it felt like 45 years). Playing House FINALLY got a second season, so if USA wants to continue its trend of renewing much-beloved comedies with unfairly small audiences, Benched could be coming back for more. But just like the Playing House renewal, it could take anywhere from 15-35 years (once again, an exaggeration, but hey, that's what agony feels like).

USA would certainly benefit from another half-hour comedy under its belt. They've clearly locked down hour long dramedies, but aside from Playing House and Sirens, they've got nothing in the comedy world.

Unfortunately, as of right now, there's no word on a Season 2 pick-up. A fan recently asked Watkins over Twitter about the status of a Season 2, and her response was a bit of a sad trombone, so maybe don't start clearing out space in your DVR:

Cheer up, Watkins. Things can turn around. After all, USA can only run so many Modern Family reruns before we've seen them all a thousand times.