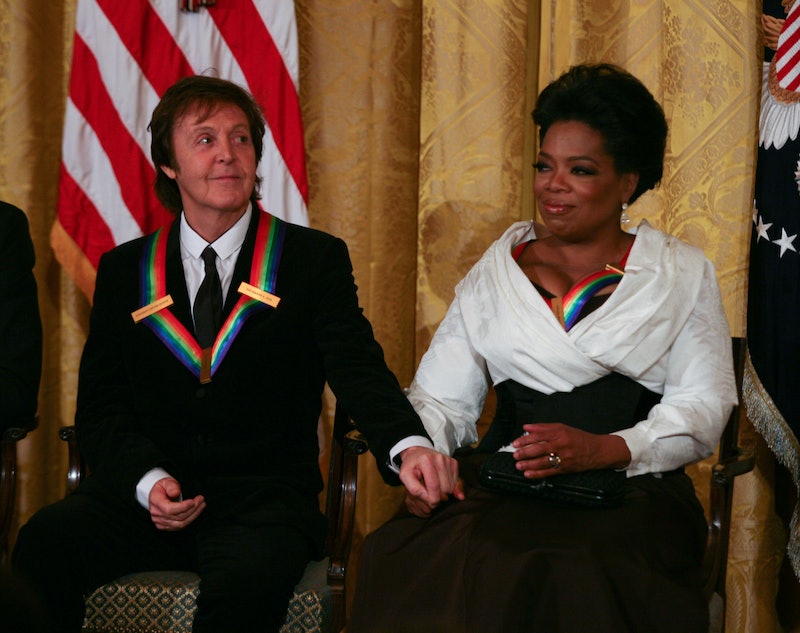 The Oscars reward the best and brightest in movies. The Grammys do the same for music. Other awards recognize achievement in all sorts of artistic and entertainment genres. But only the Kennedy Center Honors does it all. Each year, around five people are chosen to receive a rainbow medal and be crowned one of American culture's most influential artists. As ever, this year the field of winners come from a diverse spread of professions. Actors Lily Tomlin and Tom Hanks, musicians Sting and Al Green, and ballerina Patricia McBride were all picked to be inducted into the exclusive club of Kennedy Center winners earlier this month. But how are the Kennedy Center Honorees chosen? What's to stop me from nominating, say, T-Swift, for example? (Because after the year she's had, you know she deserves it. She could easily take Sting's spot — that guy's not even American.)

Well, one of the reasons Taylor didn't go home with a medal on Dec. 7 is because, for starters, I'm not allowed to nominate anybody. Nominations for Kennedy Center Honors can only come from past winners and the board of the John F. Kennedy Center for the Performing Arts, and I'm still waiting to hear back about my application.

Once the nods are in, seven members of the Center's executive committee pick their five to seven winners, according to the New York Times. There's no voting, no formal bylaws, and there aren't even any official criteria for choosing who wins. But it's my belief that, as an American, you can be anything you want: even the winner of a highly prestigious, if somewhat sketchy award. So I have created, just for you, a quick and easy method to achieving this great dream. Here's your step-by-step guide to become a Kennedy Center Honoree:

Step One: Be a Culturally Influential Artist

Your career should span roughly 30 years, so get started on that ASAP. Try and pick a profession that allows, or even requires, people to applaud whenever you do your job.

Step Two: Get Close with Past Winners

To do this most efficiently, have your agent create a list of all past nominees, and add them to your email and phone. Then, delete all other contacts. Your family and friends may be bummed at first, but once you win the Honor they'll probably get over it. Eyes on the prize.

Step Three: Make Sure to RSVP

According to the New York Times, Kennedy Center Honors are only given to artists who agree to attend the event (because their presence draws big donations and big ratings for the telecast). So you'll want to clear out your calendar for the first two weeks of December, just to be safe. You're free, right?

Step Four: Have a Good Relationship with the President

Hey, the ceremony is held in his house. It couldn't hurt.

More like this
Jason Derulo Is Launching A New Singing Show In The UK
By Maxine Harrison
18 Years After 'American' Idol, Jennifer Hudson & Simon Cowell Reunited On Her Talk Show
By Radhika Menon
Two UK Cities Are Now In The Running To Host Eurovision 2023
By Sam Ramsden and Rachel Mantock
Mel C Wants You To Know That Margaret Thatcher Wasn’t A Spice Girl
By Darshita Goyal
Get Even More From Bustle — Sign Up For The Newsletter