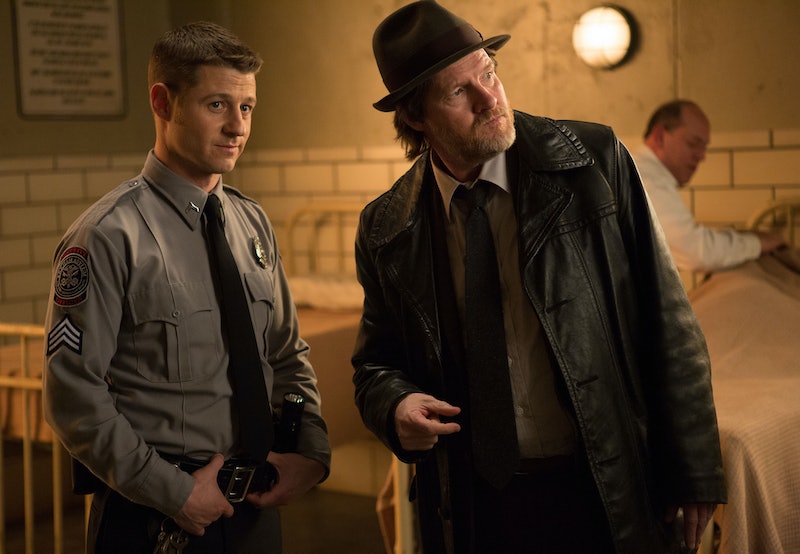 The Batman origin series has been away from our TV screens for a while now, but Gotham is finally returning to FOX with brand new episodes starting Monday, Jan. 5. You know what that means? More fun and quirky storylines involving, of course, more villains. As for the latter, one of those villains will be the return of the notorious Dollmaker to Gotham . There's already been mention of the criminal during the episode revolving around those crazy child snatchers (played by Lili Taylor and Frank Whaley) kidnapping homeless children, including Selina Kyle, but we still don't know the Dollmaker's true identity.

Luckily, I'm here to possibly narrow it down before we come face-to-face with the Dollmaker. Before we get to his identity, here's what we know about the villain, so far. Not only was he behind the capturing of children for a reason that remains unknown, but also no one is willing to question him, according to villainess Fish Mooney. Other than that, we still don't know what he wants with children or if he has a bigger plan, but we will soon learn even more details. Per TVLine, the Dollmaker will be a recurring character and we will first see him pop up in Episode 17.

Now back to his identity. There's been no casting news, yet, but there's some speculation that Michael Eklund will play the Dollmaker just like he did on The CW's Arrow. Eklund tweeted a photo with a mysterious caption reading, "There is just something about shooting in New York - feels GOTHAM-esque." Hmm... very interesting, indeed. Just like Gotham's identity of the Dollmaker remains a secret, so does the casting choice.

With that said and done, let's get to who this ominous Dollmaker is. Whether Gotham chooses to stick to the comics or if it might put a spin on the character, let's hope the Dollmaker maintains his creepy nature and evil status, because it just wouldn't be the same. Here are just a few possible identities of the masked Dollmaker.

This isn't really a revelation or news, but it's important to note that Gotham 's upcoming Dollmaker is named Dr. Dulmacher, according to TVLine, and that he's "another Dollmaker." This time around he will be a "mad European scientist." Of course the Dollmaker could still have traits that come from other iterations of the character, or even have more than one identity. Maybe this recurring character is Dulmacher, but the Dollmaker we heard about before is someone else that better fits one of the Dollmaker's other comic identities and they work together somehow.

He Is Marcel Mannequin

The Dollmaker has had three known identities throughout the years. The first was named Marcel Mannequin. He made an appearance in Plastic Man in June 1968. Other than that, not much is given about this particular Dollmaker. There's always the chance Gotham will expand on this identity and give us more details about the man with a very cool name.

He Is Anton Schott

After Marcel Mannequin, the Dollmaker obtained the moniker of Anton Schott. Not only did his father supposedly abuse him, but his mother ran away with Anton to save him from his father's cruelty. However, she later abandoned her son. Eventually, Anton started kidnapping children and turned them into cybernetic dolls. Well, that surely would fit into the previous Gotham storyline, right? If this is his identity, Anton could also easily build an alliance with the homeless children. Why? They are also "unwanted" just like he was as a child... imagine how they could invade Gotham and up the crime rate by joining forces.

He Is Barton Mathis

The last of the three known Dollmaker's (and the one probably most recognized) is Barton Mathis, who also appeared on Arrow. He's a villain from DC’s New 52 continuity who had a criminal father named Wesley Mathis. Such crimes included letting Barton watch him kill and eat people. Um, do we have another Hannibal Lecter on our hands? The Dollmaker was created as a result of Barton witnessing a young Jim Gordon shooting and killing his father. Enter the very creepy Dollmaker, aka a man donning a masked designed from his dead father's skin. In Arrow , Barton kidnapped women, injected them with hardening liquid, dressed them up like dolls, and killed them.

Wow. If this is the route Gotham chooses, he just might be the most twisted villain we've seen on the series. Barton seems like a good fit, especially since Gordon is involved. With that said, how old was Barton when he saw his dad murdered? If he was a young boy watching a young Gordon (who we are watching now on Gotham), then Barton doesn't seem likely. It's unlikely a young boy could be the Dollmaker, right? However, if he was a teen or a young adult witnessing his dad's death, then that's more believable. Maybe this Dollmaker will be a combo of Anton and Barton, with some Dulmacher thrown in, letting Gotham create its own version of the famous killer. In the city of Gotham, anything is possible.

He Is Barton Mathis' Father

This is a theory many have been throwing around. The Dollmaker could be Barton Mathis' father, which means Gotham might put an interesting spin on the story. Who doesn't like a good twist? What if this reported Dollmaker is Wesley Mathis, Barton's father? It makes sense, especially since it's known that Jim Gordon kills Wesley. Then, this opens up for Barton to witness his father's murder and — bam — we're introduced to the next Dollmaker in the making. After all, Gotham is an origin story, right?

Which Dollmaker will we see on Gotham? It could be one, it could be a combination, there could be multiple Dollmakers, or it could be a brand new identity. One thing remains certain: the character sounds promising. Unfortunately, we have to wait a bit to find out who he really is, but at least we know he's waiting for us.