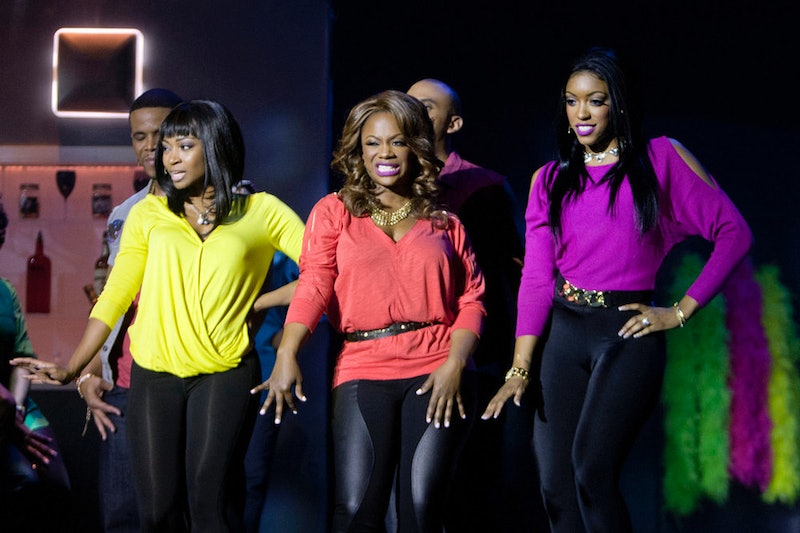 On tonight's episode of The Real Housewives of Atlanta, Kandi was discussing the crossroads between her personal and professional life, personified in her musical that featured in the Season 5 finale. So, can you see the tour of Kandi Burress' show, A Mother's Love ? The signs were not good — not even the Old Lady Gang was excited to potentially appear in the stage show — but Kandi was tentatively hopeful that they'd be able to sell out based on audience's curiosity about the real-life scandal behind the music(al). Unfortunately, turns out that the tour was cancelled in the early fall, so watching Kandi stress about the low sales was a little depressing. Poor Kandi isn't having the easiest or most successful year. To see the musical do so well in the Atlanta scene but bomb elsewhere must be incredibly disappointing.

Even those who bought tickets to see the show were disappointed, though at least Kandi promised that they would be refunded in a heartfelt Instagram message that she sent out in mid September.

Not very many tickets were sold, and Kandi was willing to admit it on camera: she's frustrated about not being able to control the success of A Mother's Love. It probably reminded her just how hard it's been to control her actual mother's love, especially since Mama Joyce was being very cold to Kandi this week, refusing to give her a set of keys to the new house (that Kandi paid for) and barely looking at her during dinner.

During the episode, talk of A Mother's Love didn't last that long, because things switched to talking about Kandi and Todd's actual mothers and their ongoing feud. The OLG agreed that Sharon should have never mentioned that she was going to punch Mama Joyce in the face, but they also admitted that Mama Joyce did start it by spreading rumors that have long been proven false. When Kandi suggested that Mama Joyce should come on the Mother's Love tour, it sounded less like a musical and more like a boxing match. With all this talk about punching one another and cabbage heads, I guess Porsha made the right decision to bow out after the successful Atlanta run.

More like this
15 Piping Hot Behind-The-Scenes Secrets From 'Great British Bake Off'
By Emily Dixon and Darshita Goyal
What’s New On Netflix: Ana De Armas’ 'Blonde' & A Nick Kroll Special
By Arya Roshanian
'The Bachelor's Peter Weber & Kelley Flanagan Are Reportedly Back Together
By Grace Wehniainen
Filming For 'Bling Empire' Season 3 Picked Up Right After Season 2’s Drama
By Gretchen Smail
Get Even More From Bustle — Sign Up For The Newsletter