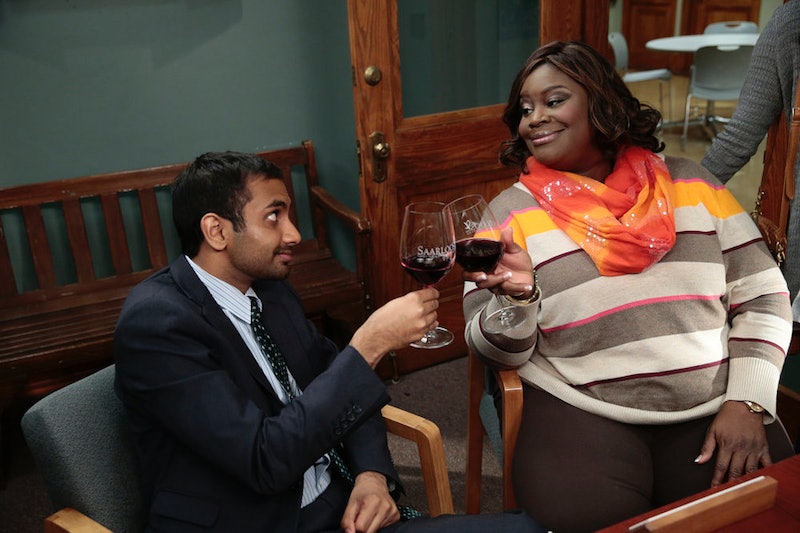 GUYS. Can you even believe that Season 7 will be Parks and Rec's last? Excuse me while I go cry in a corner — how are we going to survive without Leslie and her penchant for whipped cream on waffles? Ben and his penchant for calzones (even the ones who happen to betray him)? What about the combined spectacular treat yo'self-ness of Donna Meagle and Tom Haverford? Grumpy Ron, even grumpier April, and the preternaturally cheerful Andy? We already lost Chris and Ann, and now we'll be losing the rest of Pawnee's finest bureaucrats as well? It's going to be dang hard when the time finally comes.

That said, at least we know we're in for an epic last hurrah — because, let's remember, this is Parks and Rec we're talking about. We're all but guaranteed an awesome final season — I mean, they even delivered a spot-on series finale (complete with a bonafide time jump — how great was "Moving Up"?) a whole half-season early!

With all that in mind, here are a few New Year's resolutions for Parks and Recreation to make this the show's MVP season — it deserves to go out on a high note, doesn't it?

1. Let Ben Put his Bad Experience with Calzones Behind Him

Few shows do running gags as well as Parks and Recreation — so here's hoping that its final season is rife with them, especially a loving reunion between Ben and his favorite food.

2. Subject Andy To Guardians of the Galaxy Jokes

3. Make Andy & April Explore Other Sides of Themselves

You know who's even more awesome than Star-Lord? Burt Macklin, FBI — especially when accompanied by moneyed heiress, Janet Snakehole. Come on, guys: it's a very doable resolution. Just step back into those awesome alter-egos.

4. Loosen Up Ron's Lone-Wolf Tendencies for his Son

I want to see a playdate between Ron's son and Leslia and Ben's triplets. Seeing Ron's first foray into fatherhood should be pretty epic and I'm sure he'll have some amazing libertarian things to say about playdates.

The genius behind Jet Blue Ivy has to be endgame for Tom, right?

6. Pass the Torch from Leslie To April

Aren't you just itching to see Leslie pep talk April through her (potential) new job as a veterinarian? Maybe by the time Parks ends, April will as passionate about her job as Leslie always has been.

Apparently, Parks and Rec's most fabulous employees will be making this resolution happen— the final season will feature Tom and Donna treating themselves in Hollywood!

8. Leslie Has To Run for Public Office

The series is going to end with her running for governor of Indiana or something, right? You know that's a New Years' resolution she's made annually since she was four years old. At the very least, she's got to become BFFs with Michelle Obama (or Joe Biden... but that's a different story).

9. Bring Ann Back To Pawnee

I know Ann and Chris are probably very busy being new parents and all, but Ann's got to resolve to make some time for her best friend in the whole world. She has to (has to!) come back for the series finale!

Think you can carry out those resolutions for us, Parks and Rec? Let's hope so!