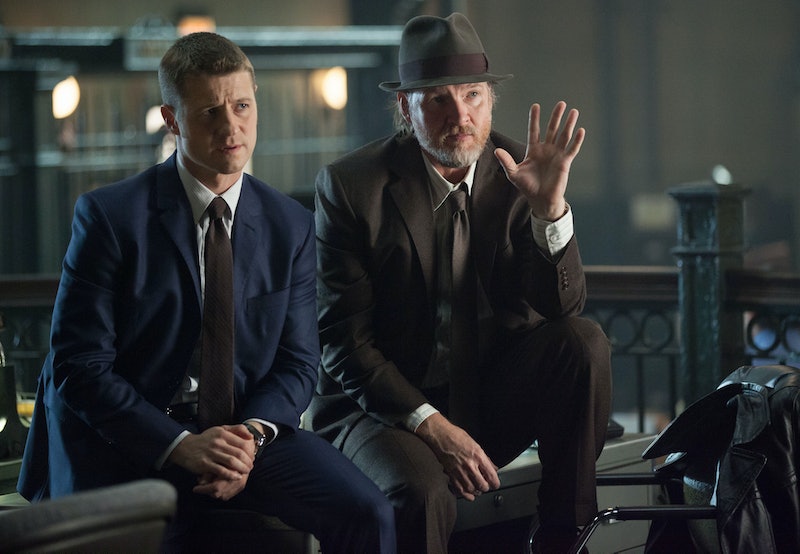 While the series is still finding its footing narratively, Gotham has proven to be a ratings juggernaut for Fox. The first season has been loaded with iconic villains like Oswald Cobblepot, aka The Penguin, who takes the lead. I won't mince words — as a longtime fan of the Batman mythos, Gotham alternatively bores and infuriates me. There are brief moments of intrigue mostly revolving around the mob war storyline with Penguin and Fish Mooney. But for the most part, the show needs to get into better shape. Gotham 's winter midseason premiere is Jan. 5 and based on what we know about the rest of Season 1, it looks like the show is making strides to step up its game. Here's a look at what to expect when the series returns.

Besides Alfred Pennyworth, Dr. Leslie Thompkins is Bruce Wayne's closest confidante. In the comics, Thompkins knows Bruce is Batman and acts as a doctor that heroes turn to when they get into painful mishaps while keeping the city safe. It was announced that Homeland's Morena Baccarin was cast as Dr. Thompkins and I'm hoping we'll get more development of the female characters on this show with her introduction.

James Gordon Starts Fighting Back Instead of Playing Nice

One of the biggest criticisms I have of Gotham is that it hasn't developed James Gordon, when he is supposed to be our lead character guiding us through the various hierarchies of this corrupt city. Gordon is a good guy detective who plays it too straight. Worse yet, he's boring as hell. There's a way to craft a good man fighting corruption that's interesting, especially in a noir-flavored drama like this. The minds behind Gotham seem to have realized their misstep based on some interesting spoilers the executive producer of Gotham, Bruno Heller, dropped in an interview with Entertainment Weekly.

...at a certain point, Gordon says, "Screw it. I’m tired of playing it safe and being cautious. I’m going to go full throttle to bring down the corrupt police administration."...And just when Jim thinks he’s achieved a certain level of success against the powers that be, they pull a vicious table-turn on him that will play out in the last episodes of the season in a very big, scary theatrical way.

Penguin Lands in Jail and Isn't as Powerful as He Thinks

"You're in there because I put you in there" says Don Maroni as Penguin stands helplessly behind bars in the preview above. After hearing that, I can't lie, I cackled. Detective Harvey Bullock enjoys seeing that Penguin lands in jail just as much as I do. Penguin got a bit too full of himself after playing the crime game really well during the first half of Season 1. It was starting to seem like Penguin was going to dominate Gotham's crime scene with no obstacles at all, besides Fish Mooney. But this development shows that Penguin's road from disgruntled lackey to powerful crime boss won't be easy.

Penguin Gets Even Bolder with His Game Plan

Of course, Penguin won't back down after this setback. Executive producer Danny Cannon told TVLine, "So even though there are going to be some major roadblocks for Penguin, he’s clear on his mission, which is to bring it all down."

I'm never going to be used to writing the name Ivy Pepper. If I ever meet anyone on the writing staff of Gotham, the first thing I am going to ask is why they changed her name from Pamela Isley to Ivy Pepper for the show. Ivy Pepper does have a weird, creepy energy that makes the character strangely engaging. Selina Kyle finds Ivy on the streets sick and alone and decides to help her out in the upcoming episode, "Rogue's Gallery," according to the episode description. They're not exactly friends yet, but I can't wait to see them become closer.

The Scarecrow Comes to Gotham

It was announced that Scarecrow is coming to Gotham, but he won't be the menacing doctor we saw in Batman Begins. In his EW interview Heller explained, "This is not a kid being a loony Scarecrow; this is a couple episodes about how that character has evolved—everyone’s character is formed in their childhood to some degree or another. His father is involved, as is part of the [character’s] mythology".

The rest of Season 1 of Gotham will see characters both new and familiar dealing with dark times. Things are about to get real, and I'm actually excited for Gotham's return.