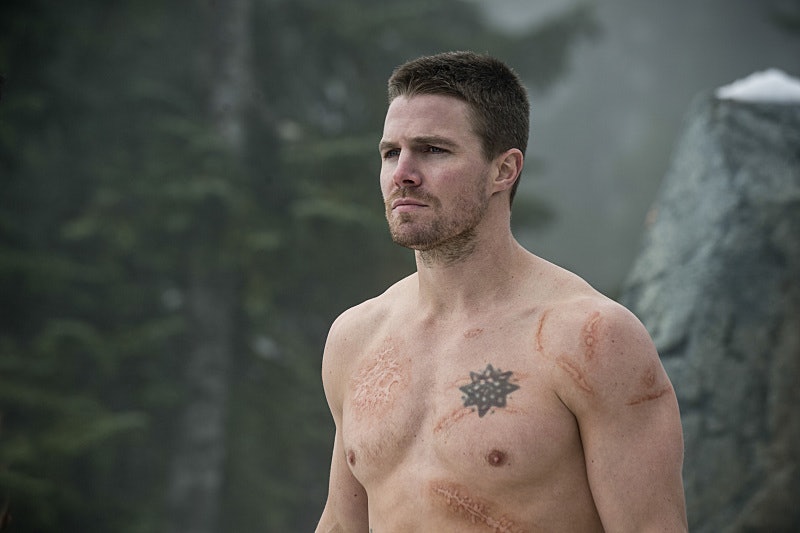 It's been weeks and weeks since Oliver Queen fell to his death (allegedly) during the Arrow midseason finale "The Climb," and yet I'm still nowhere close to being able to cope with what happened. I'm sorry, you guys, but my brain simply cannot register seeing that perfectly chiseled chest get run through by a gigantic sword. However, despite my incessant protests, that seems to be what actually happened and not the result of some insane nightmare I concocted. But I am far from accepting defeat. Oliver is still alive. He has to be, or else this show is in for a pretty big name change. And as much as the writers like to shock viewers, there's no way they'd straight up kill off their lead star (at least not permanently). So the only question that remains is: how will Oliver return to Arrow, or specifically, to the land of the living?

Let's face it, if he's not dead already he's certainly pretty close to it. Like he's not just knocking at death's door, he's already stepped inside and is in the process of taking off his shoes. But just because you're dead on a series doesn't mean that you'll necessarily stay like that forever. In fact, there are a few different ways the writers could go about bringing Oliver back onto our TV screens where he oh-so rightly belongs. For instance…

As fellow Bustle writer Angelica Bastién previously mentioned, the Lazarus Pit is known for its restorative healing properties and could end up playing a big part in Oliver's recovery. After all, Ra's al Ghul did mention how his last duel was 67 years ago and given that he looks to be roughly in his 40s or 50s, I'd say he's taken a dip or two into that magical pit before. In the January promo, we see someone approach Oliver's supposedly dead body, which appears to be lying on the edge of a wintery cliff. Perhaps Maseo decides to betray Ra's and drags his former friend into the pit.

Unfortunately, though, if this does turn out to be the case, it should be noted that the pit comes with a few rather worrisome side effects. You see, while it possesses miraculous healing powers, it's also known to alter its users in some form or another and can even result in madness. So if we get Oliver back in this way, he may no longer be the same Oliver we once knew. (Though, personally, I'd take any Oliver over no Oliver at all.)

Of course, there's always a chance that the person approaching Oliver's body is yet another enemy in the form of Merlyn. However, what if instead of finishing the job (assuming Oliver isn't dead just yet) he ends up being the one responsible for our vigilante's recovery, whether it be due to special herbs that no one's ever heard of or just plain surgery. (Let's not forget that Oliver was clearly not stabbed in the heart, but rather on the other side of his chest just above his abdomen. It's still a serious injury, mind you, but not one that would necessarily kill you instantly.

I'm sure Merlyn could find the best doctors in the world to tend to Oliver's wounds if he saw fit. It could be done out of gratitude for taking the fall (literally) for Thea's crime of killing Sara. Or maybe he intends to use Oliver's temporary weakness to his advantage and manipulate him into taking Ra's al Ghul down for good. (Even though we all know Merlyn is the true villain in this tale right now.) He may even start drugging Oliver with the same stuff he gave to Thea. Who knows, really, but I doubt his intentions are strictly honorable. However, if it's what ends up saving Oliver's life, I'm certainly not about to complain.

Anyone else find it kinda odd that an expert killer like Ra's didn't go for the kill shot (or stab, rather) when he ran Oliver through? It had to of been done intentionally, right? Perhaps he wanted it to look like he had killed Oliver, knowing full well that he would be able to save him once the duel was over. Oliver's body is made up of a lot of scar tissue already, so maybe Ra's knew just where to strike, so that it wouldn't result in a fatal injury. Then, with Oliver presumed "dead," the two could eventually begin plotting ways to take down Merlyn for his heinous crimes. They'd definitely have the element of surprise on their side.

The worst case scenario would be that we'd still get a healthy dose of Stephen Amell on Arrow, but in flashback form only, meaning that the present-day Oliver will remain dead for good. Now I highly doubt this is the direction the writers would choose to go, but I guess when it comes to a series like this, you can never be too sure. #SaveOliver