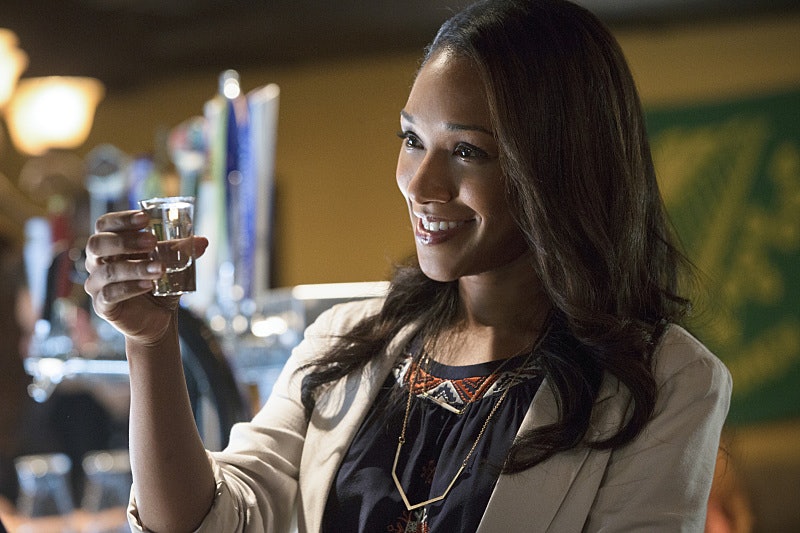 Being the girlfriend or wife of a superhero isn't as glamorous as you may think. Sure, he can get you to work on time everyday since he's fastest man alive and there's a certain fame that comes with it. But you also may find yourself a target for every crazed villain in their rogue's gallery. On The Flash , Iris West and Barry Allen aren't even in a relationship yet. The midseason finale left them in a pretty bad place, with Barry professing his love and Iris not so hot on the idea. Still, trust me, WestAllen shippers, their time will come. Iris West is to Barry Allen who Lois Lane is to Clark Kent. The show sticks to the core of the DC Comics canon, so it is highly unlikely that they won't get together. Which means I'm already worried about the fate of Iris. In the comics, Iris goes through a lot of trials and tribulations being married to Barry. One of the greatest threats to her life happens to be his arch nemesis, the second Reverse-Flash known as Professor Zoom. With Reverse-Flash front and center on the show thanks to the midseason finale, does that mean Iris will die on The Flash ?

If Iris is going to die on the show, it won't be for a while. In the comics, Iris is killed by Professor Zoom after she and Barry are married. Considering where their relationship is right now, they are a long way off from marriage. While all evidence points to Harrison Wells being Reverse-Flash, the show can still surprise us and reveal that something else entirely is going on. The history of the Reverse-Flash is pretty complicated. Professor Zoom is definitely where the writers are taking cues from, since he's Barry's greatest foe in the comics and the second villain to take on the mantle of the Reverse-Flash.

I can see a certain narrative arc being attractive to the minds behind The Flash too, with Harrison going from trusted mentor to great villain to killing Iris and creating great tragedy for Barry. But aren't we all tired of this storyline? How many women around powerful men in superhero films and comics have to die to create pain and motivation for the lead character until writers decide to be inventive? There are other ways for creating emotional resonance on a show like this. But just because Iris is killed off in the comics doesn't mean the show is interested in taking that route.

In a BuzzFeed interview, DC Entertainment's Chief Creative Officer and Flash producer Geoff Johns was asked about how much we can expect from the comics to appear on the show. Johns said, "I like the term easter egg, but I prefer all our easter eggs actually lead somewhere, that they’re foreshadowing. So a lot of the things we’ve planted in these series are there to lead to and introduce new characters." When asked about what is off-limits for the series he said, "The fact I’m even pausing to consider that means that we haven’t had those discussions. No. Organically [DC Comics' shows] are all growing."

The Flash has proven it isn't afraid to play around with the canon while sticking to major points from the comics. Iris and Joe West are already incredibly different from their comic book counterparts on The Flash. Yes, in the comics after being married to Barry for several years, Iris is killed by Professor Zoom when he vibrates his hand at super speed inside her head. This is one of the most insipid and terrible deaths in comics. Of course, she isn't dead for all that long. No one usually is in comics. But still, Iris deserves better than that.

The history of The Flash is sometimes needlessly weird thanks to how important time travel is to the character. I highly doubt Iris will be revealed as being from the 30th century and not really Joe's daughter, like an early version of her comic book counterpart. One of the best things The Flash can do is to streamline the weirdness of the comics and dump the lesser plotlines that exist in the canon. Developing Iris' best known traits like her intelligence, wit, and great career as a journalist makes more sense than bringing in her original background from pre-New 52 DC.

There are dangers for all characters even tangentially related to superheroes. I understand that. But for female characters, the threats triple. Far too often mothers, wives, and girlfriends are killed off because it's an easy way to produce some emotional pain and development for the men in their orbit. The Flash has proven to be a joyful and emotionally resonant mix of everything I love from the comics. Right now, we still don't know if Harrison Wells is the Reverse-Flash and Iris still isn't romantically interested in Barry. But that's actually good, because it means the writers have time to develop these plotlines and avoid the cliche of killing Iris on The Flash.

More like this
'The Distant Echo’s Ending Mirrors 'Karen Pirie' In One Crucial Way
By Catharina Cheung
This Episode 6 Moment Foreshadows Viserys' Fate On 'House Of The Dragon'
By Grace Wehniainen
Nicola Coughlan Shared A Lady Whistledown Excerpt From ‘Bridgerton’ Season 3
By Grace Wehniainen, Alyssa Lapid and Sam Ramsden
'Firefly Lane' Season 2 Will Be The Show's Last — But There's A Twist
By K.W. Colyard and Grace Wehniainen
Get Even More From Bustle — Sign Up For The Newsletter