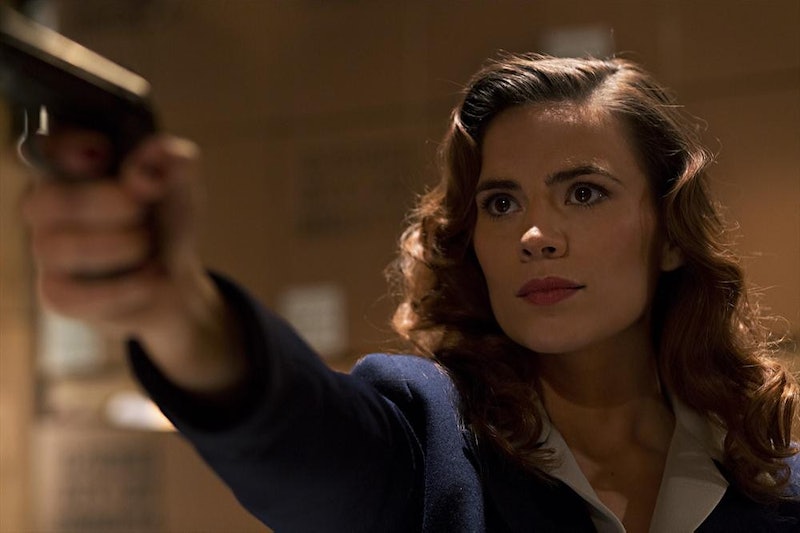 It's time we accept that Agents of S.H.I.E.L.D. has just up and left for the next three months, after leaving us on the cliffhangeriest cliffhanger in the history of ever. I know it's hard, because the show left us in the dust with so many questions: Who was that faceless dude? What's going to happen next to newly-minted superhero Skye? And what about the morally murky, oddly feline Raina? And for goodness' sakes, will Mack survive? Luckily, Marvel is bringing fans the perfect thing to take our minds off all those questions. It's time to buckle up for some Agent Carter , which will premiere on Jan. 6 at 8 p.m. on ABC.

This cleverly planned, extra long hiatus for S.H.I.E.L.D alotts just enough time for a succinct (yet hopefully satisfying) miniseries to fill the gap. That said, Agent Carter is far (far!) from being a mere consolation prize — in fact, in my scientific opinion, it's going to be totally awesome. Fans have been itching for more of the super-fab, super-badass Peggy Carter ever since she stole everyone's hearts back in the days of Captain America: The First Avenger. Add in the fact that it's telling the story of the uncharted territory leading up to the post-war inception of S.H.I.E.L.D., and you've got yourself the basis for a pretty darn rad eight episodes of TV. There are certainly a lot of reasons to get excited about Agent Carter, and here are a select few.

Markus and McFeely wrote both Captain America films, so they have proven themselves as screenwriters in a major way. It's going to be fun seeing them delve into episodic television, as the longer form should give them more time for character development, backstory, and the like. If their film work is any indication, they're going to do it with aplomb to spare.

2. It's the Female-Driven Story We've All Been Waiting For

We may not have the Black Widow movie yet, but Agent Carter is definitely a step in the right direction.

I'm sure her star-turn performance/all-around badassery is part of the reason Peggy got her own TV show.

4. Enver Gjokaj Is Coming Back to TV!

Anyone who watched Dollhouse knows that he's kind of amazing (his Topher Brink impression is still one of the best things ever, IMHO).

Fans of A Cinderella Story and One Tree Hill, rejoice!

Come on, it's set in post-World War II/pre-Cold War era, which was a fascinating (yet often overlooked) time period. I don't know about you, but I'm picturing Agents of S.H.I.E.L.D. set in the 1940s — and it's looking pretty epic.

7. The Fashion Game is Going to Be Strong...

8. ...And the Beauty Game is Going to Be Even Stronger

Say what you will about the 1940s, but they knew their way around a boldly arched brow and an even bolder red lip.

It's simple and obvious, but that doesn't change the fact that this is the biggest reason to be excited for Agent Carter to finally make its debut.