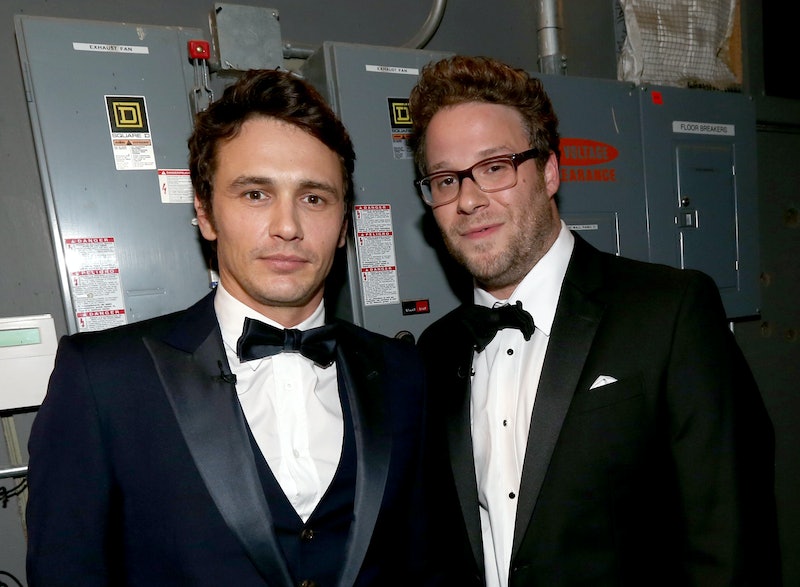 In order to promote their highly controversial and fraught film The Interview, as though it needs a lot more promotion after all that free press it got from Guardians of Peace, James Franco and Seth Rogen live-tweeted their new movie on Sunday. The film's screenwriter, producer, and director, longtime Seth Rogen collaborator Evan Goldberg, also participated.

Their tweets provided some insight into the process of making the film. However, the almost apologetic nature of some of them made me wonder what has been going on for these guys since the movie came out. The Interview is ultimately a pretty silly film, but it has prompted so much backlash and made life extremely difficult, even dangerous, for a large number of Sony employees, many of whom I'm sure had very little to do with the film. Rogen's tweets especially seemed a little sheepish, he seems to be making fun of the juvenile nature of the film. Franco seems less apologetic, more highly amused by the movie's jokes. Maybe I'm projecting, but as Rogen admitted, the whole experience has been pretty weird for everyone involved.

While Rogen was on top of the organization of the event, telling viewers when to press play and the like, Franco showed up an hour late. Seems about right.

Here, Rogen seems a little embarrassed by the film's use of stock footage:

He does admit that there was some quality acting in the movie:

Franco pops in a little late:

In all seriousness, Rogen reveals that a lot of research went into making the film:

And a nice misspelling from Franco:

I'm not sure if he's serious here about the uproar over the final scene:

Rogen seems a little embarrassed by the movie's last joke:

But Franco's all for it:

And Rogen sums up the overall experience: