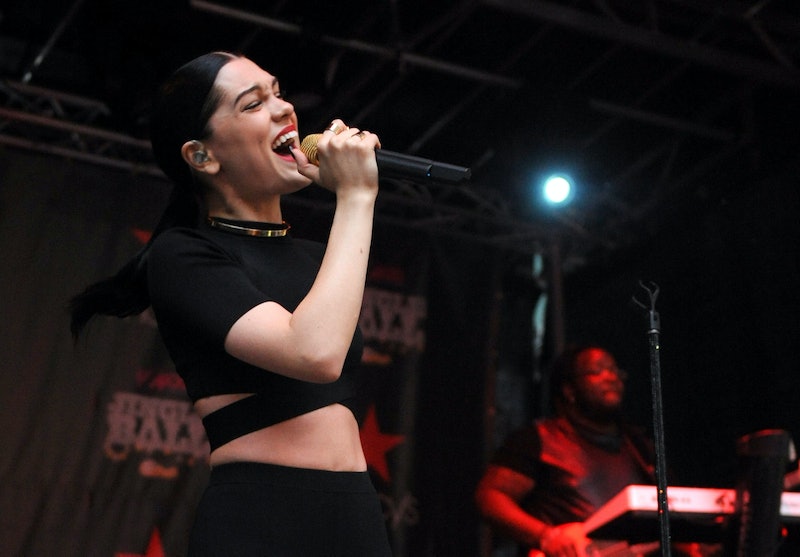 While it may be known as the Miley Cyrus hit of 2009, people often forget that Jessie J penned "Party in the USA," and reset assured, she's been partying ever since. "You've got to write songs, that's where the money is, being an artist. 'Party In The USA' paid my rent for, like, three years," Jessie J told Glamour Magazine. "I'm SO happy for her," I think to myself while living in my mom's house, eating fudge sundae pop tarts for lunch. But you know, if Jessie J can do it, you can do it, too.

I'll admit, I have a sordid history with the track. My freshmen year roommate, as lovely as she was, insisted on playing it in our dorm unironically, making my punk rock heart bleed. She even recorded a video on my Facebook wall of her dancing to "Party in the USA," an act of musical terrorism I will not forgive. Suffice to say, I have never, and will never, put my hands up and play that song.

Regardless of my prejudice, I can't deny that Jessie J's success is a success for composers and lyricists everywhere, and that it's a hook-ridden pop track for the ages. However, if you can't muster a traditional pop hit, here are some other options on what to create when you're trying to live off the royalties of a song. EASY!

As we gently close upon the holiday season, let's not forget how many Christmas songs were played ceaselessly as we shopped for Mom's Isotoner gloves at Macy's. As you can imagine, penning a popular yuletide tune can make you serious bank year after year. In fact, there are two notable Christmas songs that have made records by the way they've raked in royalties.

For example Mel Torme penned "The Christmas Song," which is the the one that goes... "chestnuts roasting on an open fire." Since then, everyone everyone, from Ann-Margret to NSync have covered it, and as one of the top 10 richest songs in the world, it's grossed up to $19 million in royalties.

Likewise Irving Berlin, who has a whole catalog of timeless songs, probably could have retired on "White Christmas." Not only is it widely covered and comfortably featured in two movies (the titular White Christmas and the actually-racist version of White Christmas, Holiday Inn) but the Bing Crosby recording is lauded by Guinness World Records as the best-selling single of all time, selling over 50 million copies. Whatever, no big deal.

Write the Theme Song for a Long-Lasting TV Show

Gary Portnoy wrote "Where Everybody Knows Your Name," the intro to a little show called Cheers, which was one of the highest-rated shows on television for a casual nine years. The royalties Portnoy received could have set him up with a very comfy life, even if he had retired right then and there.

And what about The Rembrandts, guys? While you could argue they had a career beyond the Friends theme song (although try to name ONE other song by them, I dare you) "I'll Be There For You" is definitely their cash cow. As the show's spanned over 10 seasons, creating several box sets and syndicating over several networks, it's no doubt those bastards are living large. And when the show hits Netflix next month? Forget about it.

Create Something Absolutely Humiliating, Have it Go Viral

I mean, we're not going to blame poor Rebecca Black for writing "Friday," that is not her burden. However, she DID manage to make some royalties off the song, and while the number itself is vague, she's definitely collected several thousand off YouTube and iTunes royalties collective. So while the sting of embarrassment may hold for years, the upside is that she can probably pay for college, and I can't. So, who's the real winner there?

With the way the music industry is (see: above video) this may be your best bet. Stay strong, guys. I know somewhere, deep down, we all have a "Party in the USA" inside of us, just waiting to pay off our student loans.

More like this
The Spice Girls Just Dropped A Brand New Music Video
By Sam Ramsden
Kate Bush Revealed The Real Meaning Behind 'Running Up That Hill' Lyrics
By Darshita Goyal
Twitter Is Freaking Out Over Rihanna’s 2023 Super Bowl Halftime Show Announcement
By Stephanie Topacio Long
Is Dua Lipa Dating Trevor Noah? New Photos Show Them Kissing & Hugging
By Brian Anthony Hernandez and Martha Sorren
Get Even More From Bustle — Sign Up For The Newsletter