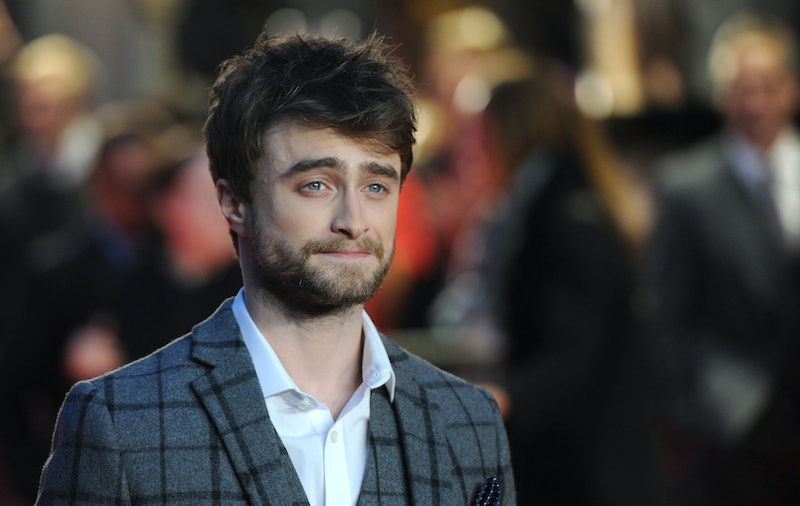 Daniel Radcliffe has been many things this year: an impressive rapper on Jimmy Fallon, a Broadway actor, a dog walker, and perhaps most importantly, Daniel Radcliffe has been a feminist. A feminist you say? There is no doubt that the "F word" has been one of the hottest topics this year, and to that I say, finally! The openness of talking about feminism has lead many beloved people in the spotlight to speak candidly about the idea that was once shunned, even by women themselves.

We can attribute the pop culture popularity of the word feminism to many female celebrities like Beyoncé, Laverne Cox, Taylor Swift, and, of course, the time when Emma Watson spoke all of the truths in her viral speech for her new campaign, HeForShe, at the UN Headquarters. But lucky for us, many of our favorite male actors have also taken a stand for gender equality and that makes them about 3984729 times more attractive, am I right?

After I was done drooling over Tom Hiddleston and Benedict Cumberbatch in their #ThisIsWhatAFeministLooksLike t-shirts, I thought I couldn't handle another feminist English man. Turns out, along with being absolutely adorable and smart, funny, etc., Daniel Radcliffe has had some really great feminist moments, so the swoon factor is once again at dangerous levels.

After his try at a romantic comedy, What If, he said the press was constantly hounding him and saying that he was an "unconventional romantic lead" because they still related him to playing a young boy in Harry Potter. When asked about this, without a beat, Radcliffe's response was, "Well, the male population has had no problem sexualizing Emma Watson immediately.” YAS, DANIEL.

When He Said It Loud & Proud

In October of this year, Radcliffe was interviewed by GQ UK and when faced with the straight forward question of "Are you a feminist?" he simply replied, "Yes." He went on to say,

There's seems to be a very recent thing that you come "out" as a feminist. It's a very weird thing. I mean, yes of course but I'm a feminist in as much as I'm an egalitarian about everything and I believe in meritocracy. I think anyone who isn't at this point is just swimming against the tide just like people who are vaguely homophobic or racist or sexist or whatever it is, I just think "God, you're still keeping that up? Give it up, you've lost."

When He Called for More Positions for Females in Entertainment Industry

In an interview with Stylist magazine, Radcliffe was asked whether he looked for roles with a very rounded cast to which he replied

On more than one film I’ve persuaded people to build up the female roles... There are certainly more female writers now than there were but the fact remains, most female parts are written by men. At least there are so many more female directors, producers and directors of photography [DOP] now. I worked with an amazing DOP last year, Reed Morano, who did Kill Your Darlings, and what she did for that film was amazing. I think — I hope — the film industry is becoming a lot more balanced.

When He Said the Friend Zone Was a Male Thing

The actor has some pretty interesting views on male/female relationships and what men call "friendzoning." He explained to Buzzfeed,

The idea of a friend zone is like a terrible, male…have you ever heard a girl say she’s in the friend zone? It’s a thing I think men need to be really careful about using. I definitely think the idea of friend zone is just men going, "This woman won’t have sex with me."

Well, he's not wrong because we have the freedom to decide who we want to be with and women don't owe it to anyone or have to feel bad about making that decision.

Although he shares that they're not as close as one would think, he spoke of his support for Emma Watson in an interview with Digital Spy. "It's great, she's always been incredibly bright, so it's no surprise that she's now channeling that in areas aside from acting," he said. "We're not in much contact, but I'm very pleased... I just got asked by another journalist 'Are you a feminist?' and I was just like... Is there a strange thing at the moment where you have to come out as a feminist? I've been asked if I'm a feminist so many times recently, and I'm just like 'Yes, yes, for god's sake yes! Is there something that I give off that says I'm not?'"

When He Said This

Again to Stylist magazine he said, “Well, I think I’m a feminist, just by the virtue of the fact that I believe in equal rights for everyone.”

Bravo, Daniel. I think Hermoine is very proud of you.

More like this
UK Viewers Will Have To Wait To Watch The Handmaid’s Tale S5
By Maxine Harrison
15 Offensive AF Jokes In 'Friends' That Really Aren't OK
By Tolly Wright, Bustle Editors and Meguire Hennes
Megan Rapinoe's Relaxation Hack Is Super Dreamy
By Carolyn Steber
Everything To Know About 'RHONJ' Season 13
By Brad Witter and Jake Viswanath
Get Even More From Bustle — Sign Up For The Newsletter