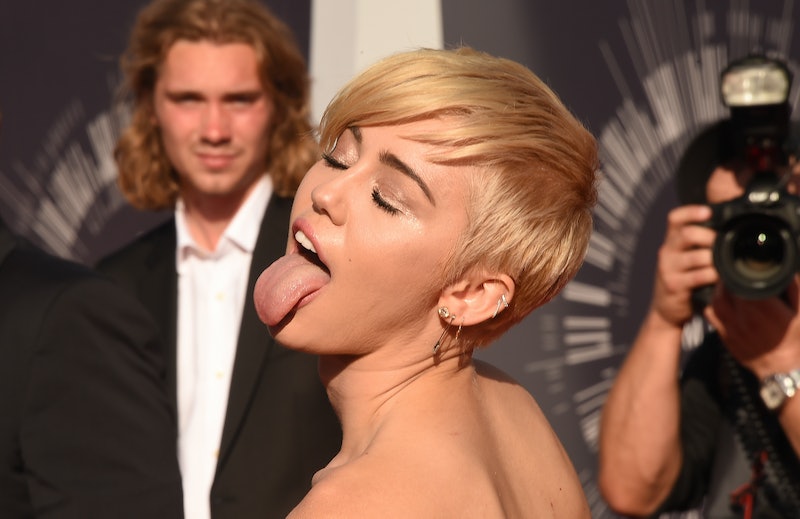 By the end of 2013, plenty of us were hopeful that Miley Cyrus would grow out of the habit of sticking her tongue out all the time. (After all, it was just an annoying phase, right?!) Alas, we were mistaken. Yet again, 2014 was a year replete with Miley Cyrus’ tongue constantly lolling out of her mouth. Hence, I feel qualified to declare that Miley Cyrus’ tongue had the worst 2014 ever.

Looking back at 365 days of tongue, nary a red carpet appearance, performance, or selfie went by without the appearance of Cyrus’ sidekick. Being the workaholic that it is, it extended to form a slide at concerts. In its more self-destructive moments, it seems to have flirted with the idea of eating a few poisonous mushrooms. Ultimately, it has endured a couple long years of constant work, and it looks ready to hibernate in Cyrus’ mouth for a while. I mean, think of how exhausting it must be to be on like that all the time. It needs a break. We need a break. Everyone could use some time apart.

Because it's time to recognize that we need a little distance, here are 11 reasons that Miley Cyrus’ tongue had the worst 2014.

It Inadvertently Ate WAY Too Much Lipstick

I mean, that can't be good for you.

With All That Sun Exposure, It Probably Got Sunburnt

Too bad there's no such thing as tongue sunscreen.

It Was BEYOND Overworked

Morphing into a slide every night for a few months really takes a lot out of you.

All it wants is just to be LIKED!!

It Cycled Through Stages of Mania

Will it EVER be truly happy again?!

It Was Cut Out of the Frame in Selfies

The only more insulting thing to do would be to ask it to take the selfie for her.

On Other Selfie Occasions, Miley Just Plain Blocked It Out

That jawbreaker looks like a tongue, but it ain't the real thing.

The Time It Almost Licked These Undoubtedly Poisonous Mushrooms

It Was Forced to Touch Some Unsavory Things

More like this
Kesha Is Down To Be The Next Bachelorette
By Jake Viswanath
Everything To Know About Taylor Swift’s 10th Studio Album, 'Midnights'
By Grace Wehniainen and Jake Viswanath
Dan Levy Appears In The Latest Teaser For The Weeknd's HBO Series, 'The Idol'
By Jake Viswanath
At 28, Melanie C Was Falling In Love & Reclaiming Her Confidence
By Olivia-Anne Cleary
Get Even More From Bustle — Sign Up For The Newsletter