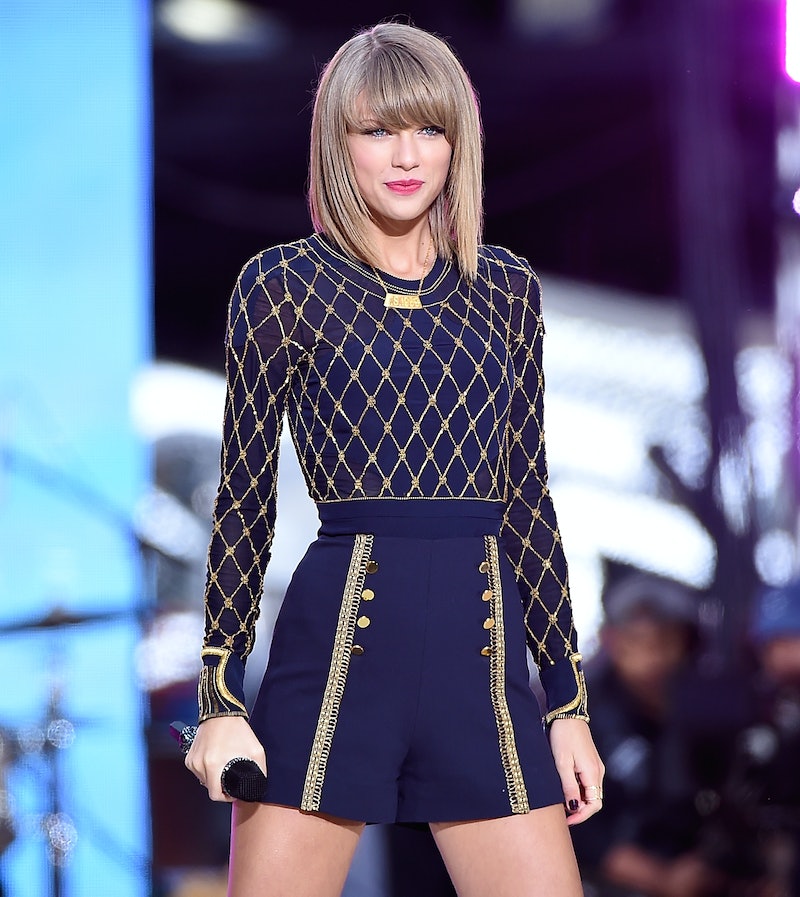 It's finally here, guys. This week marks the end of 2014 and the beginning of 2015. This is something I'd normally be pretty excited about, but 2014 was such a great year, I'm kind of bummed to leave it behind. One of the reasons I loved 2014 so much was because of all the hype and excitement behind Taylor Swift's new album, 1989, and the fact that I'm still obsessed with every single song on the CD. After all, Swift only releases new music every two years, and I'm not looking forward to the drought that 2015 will bring. Sure, she'll be on an inevitably amazing tour and making appearances and all, but nothing is quite as wonderful as 13 brand new tracks from my favorite artist that I know will quickly become my favorite songs.

And the rest of 2014 was pretty good for Swift, too — but how good? She may have graduated high school years ago, but she's still being graded... and this time, it's a little different. Instead of measuring her success in scholarly subjects like math and science, I'm grading Swift in the areas of style, music, performances, social media, and cats. Sounds pretty fair, right?

Ready? Let's find out how she did.

Gone are the days when Swift spent more time dressed as Grandma Taylor than 25-year-old Taylor, and she seems to have retired the questionable gold fringe look that still haunts me from the Speak Now tour. Instead, she's picked up on the crop top trend, and she pulls it off adorably — not to mention her matching cropped hairdo, which I'm endlessly jealous of. This would totally have been an A had it not been for that plaid pants and crop top set she wore to Z100's Jingle Ball, which disappointed me on so many levels.

I can't possibly say enough good things about 1989, so I'll let the fact that Swift's spent ten weeks at number one on the Billboard charts speak for itself. This is by far my favorite album that she's ever released, and "Shake It Off" still plays on the radio constantly, which means plenty of people still want to hear it. And if that's not enough? "Blank Space" is clearly her best music video ever. Watch it and try to argue with me. I dare you.

Taylor's "Blank Space" performance at the 2014 AMAs was incredible. I mean, the theme was murdering ex-boyfriends. Who can argue with that? Her "Shake It Off" performance at the VMAs was also incredible, but it wasn't even close to "Blank Space" status. That almost brought her down to a B, but then I remembered the Victoria's Secret Fashion Show, which was everything I needed in life, and she's back at an A again.

Homegirl posted on Instagram a lot this year, and many of the pictures she shared were with her fans — so sweet! Also, I have to take into account the fact that a lot of her Instagram participation involved giving sweet advice to fans, too, and that counts for a lot. Add in the fact that she hilariously joined the Tumblr world, and Swift has never made herself so accessible.

Swift has doubled her cats since 2013, which is huge. Meredith and Olivia are basically adorable together, and from one cat mom to another, Swift is doing an excellent job raising her children. Please keep sharing pictures and videos of them, because I am kind of obsessed.