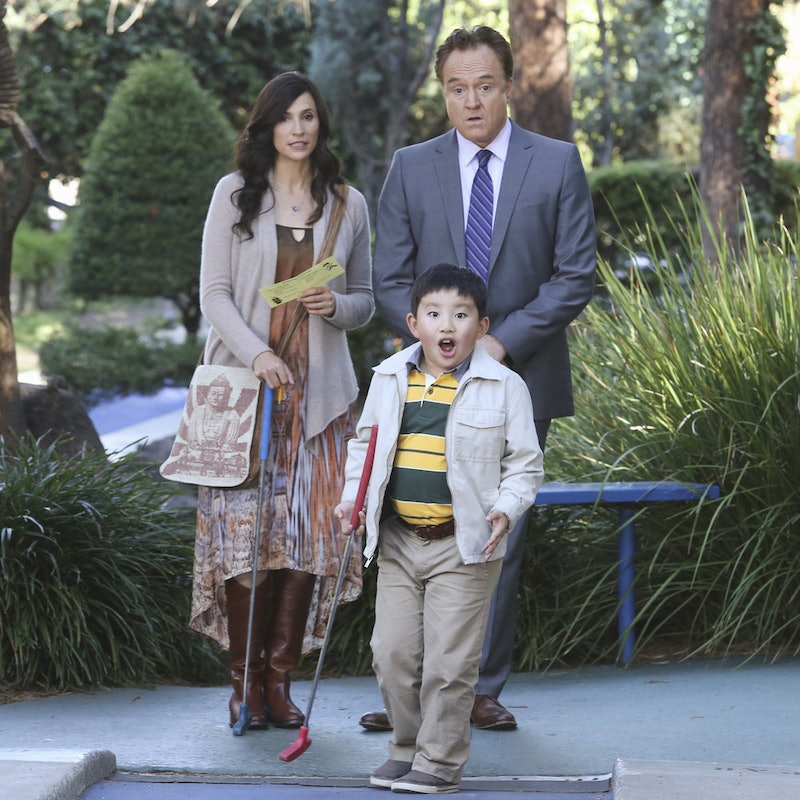 When Trophy Wife was canceled last year, I knew it was coming, but I'm still not over it. The show may have had a terrible name, but it was the funniest, most charming, sweet family shows I've ever seen (and this comes from a die-hard Gilmore Girls fan). If you're still missing the gang, brace yourselves, because a Trophy Wife reunion is happening on USA Network's Benched, and it's with everyone's favorite character: Bert!

Michaela Watkins announced the big news on Twitter, writing, "Remember the awesome @AlbertTsaiActor who played my son Bert on @TrophyWifeABC ? Guess who's gonna join #BenchedUSA tomorrow nite!" Basically, it's the best way to end 2014, so get ready for a couch date with a bowl of popcorn (or maybe some assorted flavors of gum for taste-testing) on Tuesday, Dec. 30 at 10 p.m. ET. There are no official details about Tsai's role yet, but I have a few ideas of what it must include. Although even if he just comes on screen for a split second, smiles, delivers a sassy line, and exits, it would be enough. Bonus points if Watkins — who created the show but does not star on it — cameos for a moment with her former onscreen son. My heart would explode.

In honor of the reunion, here are four things that Tsai should do on Benched. And if he doesn't, these GIFs will just remind you of how amazing the show was. Hey, Yahoo, want to pick up Trophy Wife next?

If it includes superhero talk, even better.

Especially if it's in the middle of a court room.

This GIF doubles as my reaction to the news.

Because, obviously. And sadly, I could not find a proper video of the Bertwheel, so please imagine it.