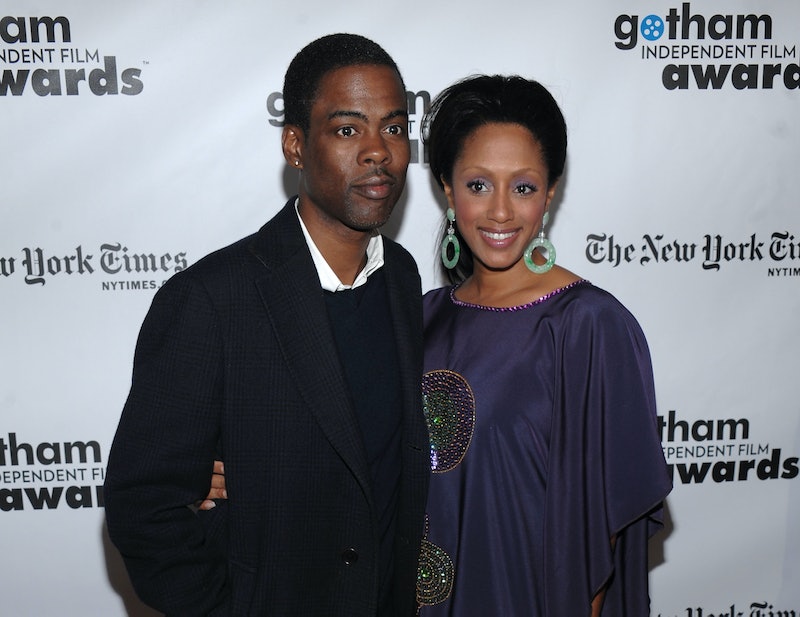 It's been a really sad past few weeks for some of our favorite celebrity couples, as was evidenced by the shocking announcement of Tim Burton and Helena Bonham Carter's split. I mean, if those two crazy kids can't make it, who can!? Just yesterday, it was announced that Chris Rock and his wife, Malaak Compton-Rock, were filing for divorce after nearly 20 years of marriage. I'll admit, I didn't really follow their relationship very closely, but after reading more into their past, they seemed to be in a happy, supportive and fulfilling marriage — or so it seemed.

As is usual with relationships, there is often only one side that we see, and that is obviously the case with these two. So, I wonder why did Chris Rock and Malaak Rock split? Have they ever given any clues? In her statement to People, Compton-Rock said she was "fortunate enough to lead a life of service [and] working with those most vulnerable makes me well aware of life's blessings, even when faced with difficulties." The last part, in which she mentions difficulties, made me think she could be hinting at problems they may have had in the past.

Since the announcement, a source who claims to be close to the couple has told People,

This was a long time coming. Chris has known it wasn't salvageable for a while. He was the one to file because he knew it was time to just move forward already.

Unfortunately, this is not the first time that the couple has been in the news because of a split — although before, it was just rumors. Back in March 2007, the couple had to defend themselves against a story in the New York Daily News that their marriage was on the rocks. In a statement to People made at the time, the couple said,

Though we have tried in the past to take the high road and not comment on the tabloid media, we find it necessary to express on record how unfortunate it is that the Daily News, specifically, and other tabloid outlets have chosen to print untrue rumors and lies about our family and marriage.

One interesting tidbit to add to this is that just a few months earlier in 2006, TMZ printed a story that Rock had begun divorce proceedings and already hired a high-powered divorce attorney. Sounds like a lot of verrrry specific details for something to be entirely untrue, which leads me to think that they probably worked through a rough patch in their marriage, which is expected.

Because Rock is obviously a very public and outspoken figure while his wife, founder of non-profit StyleWORKS, is more behind the scenes, the difference in lifestyles could have caught up to them. Throughout his career, Rock hasn't shied away from expressing his very clear views on marriage. After the initial reports of a possible divorce in 2007, Rock told People about marriage,

The best part is just having a partner. There is no real worst part. I'm not going to say there's a worst part. I mean I'm a comedian — comedians like to work alone. So maybe I'm not the ideal guy to be married to, in that sense.

I don't know about you, but there's a little clue. I haven't a doubt that marrying a famous comedian wouldn't be a handful, especially when many of his stand-up routines throughout the years has not so flattering comments on married life, with some gems like, "I’ve got nothing against strippers. Somebody’s gotta do it. Somebody has to entertain the married men of America. Your wife will take care of you, but she ain’t gonna entertain you." I'm sure she's got a sense of humor, but sometimes the fine line between private and public life can only be blurred so far.

Whatever they may be going through, it's clear that these two need time alone to focus on how this will affect their two young daughters, Lola Simone and Zahra Savannah. Compton-Rock closed off her statement saying,

While recognizing that this is a significant change, my children remain at the center of my life and their well-being is my top priority. It is in this spirit that I sincerely ask that their privacy and the privacy of our family be respected during this transition in our lives.