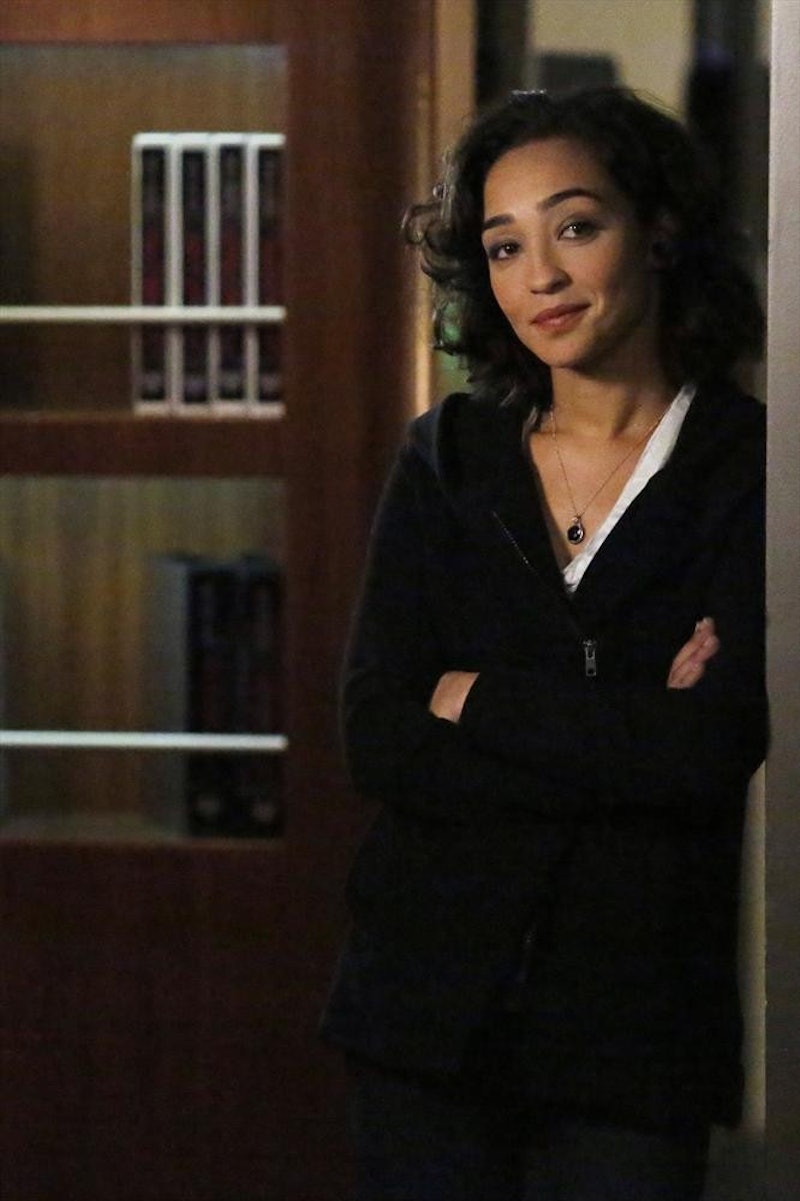 The most confounding mystery in the Marvel Cinematic Universe was finally answered in the Agents Of S.H.I.E.L.D. midseason finale, "What They Become," when we finally learned the truth behind who/what Skye is. Director Coulson's protegée was revealed to be none other than the superhero Daisy Johnson, aka Quake. In a bit of a twist, this small screen version of the character was also revealed to be an Inhuman — a departure from Daisy's origins in the comics. But now that Skye's mystery has been solved, we're left with an equally tantalizing new one: who/what is Raina? She was in the temple with Skye when the Terrigen mists were released, and she also underwent a transformation...

Although her new features were mostly obscured by fog/dust/conveniently-placed computer-generated camouflage, we know that Raina now has yellow eyes and what appears to be spines growing out of her face. Ever since the episode aired, fans have been trying to uncover her new identity; there are just as many theories out there as there are obscure female superheroes in the Marvel canon. Some popular ideas include Luna Maximoff (the empath daughter of Quicksilver), Naja (an Inhuman just recently introduced in the comics), and the character's own namesake, Raina (a green, dinosaur-like alien). But there's one theory floating around out there that's especially exciting, considering the ramifications it may have for Raina's role in the larger MCU.

One of the prevailing schools of thought posits that Raina has transformed into Tigra. In the comics, Tigra is originally a lab assistant named Greer Grant Nelson, who is endowed with superhuman powers by Dr. Joanne Tumolo. After her transformation, Tigra was covered in fur, with claws, pointed teeth, and vertically-slit eyes. It's true that Tigra wasn't an Inhuman in the comics — but then again, neither was Quake. And what if those protrusions on her face aren't spines, but the beginnings of whiskers?

Apart from the distinctly feline look of Raina's eye post-transformation, this theory seems quite possible when you consider her relationship to Skye/Daisy/Quake's father — who we used to refer to as the Doctor, and now know is Calvin Zabo, aka the villainous Mr. Hyde. Both Raina and Tigra had a relationship with a doctor who was directly responsible for their transformations into superpowered beings. Of course, Calvin is not Joanne, but there are enough similarities to see how Tigra's origins in the comics could be adapted to fit Raina's TV storyline.

Why is it so exciting that Raina might be Tigra? Because, while she's certainly not as famous as the likes of Iron Man and Captain America, Tigra is a valued member of the Avengers team, helping them battle various foes throughout the years. Probably her most significant contribution as a member of the Avengers was in the Civil War storyline... which, if you know your MCU news, is the subtitle of the third Captain America film, and the first entry in Marvel's Phase Three.

In the comics, Tigra is on Tony Stark's side of the debate over the Superhero Registration Act, and she actually serves as Stark's spy inside Steve Rogers' opposing camp, feeding Iron Man information about Captain America's plans. Is there a chance that actress Ruth Negga could be making the transition from the small to the big screen, and joining the cast of Civil War? One of the biggest concerns among diehard Marvel fans surrounding that upcoming movie is that there simply aren't enough superheroes established in the cinematic universe yet to make for a compelling civil war — especially given the fact that Sony, not Marvel Studios, owns the movie rights to Spider-Man, an integral figure in the storyline. Perhaps Marvel will bolster the ranks of Civil War by populating the film with minor characters introduced in its small screen franchises, including S.H.I.E.L.D. and Netflix's upcoming series Daredevil (premiering this May) and A.K.A. Jessica Jones (premiering later in 2015).

With S.H.I.E.L.D. introducing the world to Inhumans four years before the Inhumans film itself is scheduled to premiere, it's clear that Marvel's television brands are becoming more and more integral to its cinematic universe. Surely that means it's only a matter of time before characters start transitioning seamlessly between the large and the small screens. For fans of Negga's portrayal of the enigmatic Raina, the idea of her character appearing on the big screen is undoubtedly an appealing one. Of course, it could easily turn out that Raina isn't Tigra at all, and all this speculation is for naught. But the speculation itself is half the fun, isn't it?