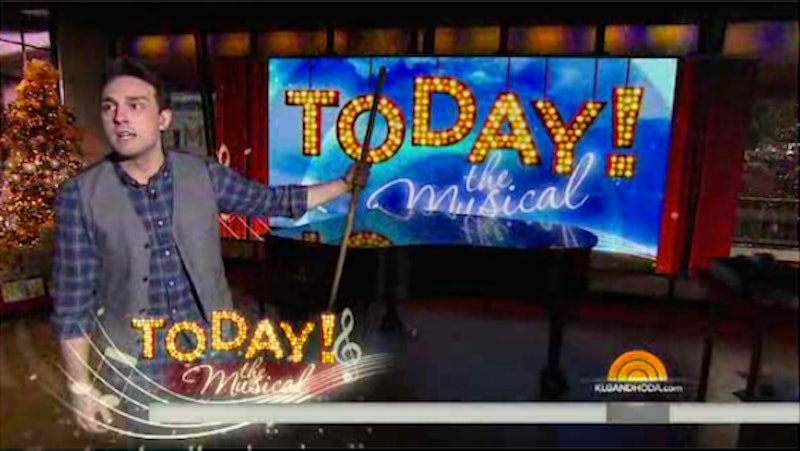 I'm going to try and refrain from asking "WHY" throughout this article, strictly for repetitive reasons, but let me just start off by asking, "WHY." Why did the Today Show decide to spend 14 minutes on a musical that was more confusing than anything else? I get that Kathie Lee Gifford, the writer behind the Today Show musical, produced something that she wanted to see come to fruition, but sometimes we can't and shouldn't always get what we want. On Monday, Gifford and the cast and crew of Today Show aired their musical, with special guest Regis Philbin, for the world to see. The world saw this.

I'm a bit of a musical snob, and I don't think that KLG is trying to sell this musical as the next Phantom of the Opera, but man, this was rough. First of all, Matt Lauer got the short end of the stick, he plays the asshole throughout the show, and why he, of all people, would commit to that role is beyond me. Then there was the open-ended plot holes, the unanswered questions, and the never-mentioned-again moments. I'm not looking for musical genius, I'm just asking WHY DID BIANCA WANT TO SABOTAGE MARTHA STEWART!

I could argue that my list of the truly bizarre moments from Today would save you the 14 minutes it would take to watch it yourself, but I really urge everyone to witness it, simply so I won't live in a world where I can't ask a stranger, "So why do you think Matt Lauer called Regis Philbin a numbnuts?"

Here is a list of the most WTF moments from the Today Show musical. Only... on NBC.

There's so much swearing

Within the first 40 seconds, three words are bleeped out. I guess KLG is edgy and all, but it's 10 a.m., let me at least have my share of sleeping cat photos before I hear the crew of Today dropping f-bombs.

I'd like to suggest that this musical is called Today We Bash On Matt Lauer: The Musical, but that can be reworked if this ever hits Broadway.

Is there no respect anymore? Philbin is almost as precious to our country as is Mount Rushmore or the Liberty Bell. You, Lauer, are a numbnuts.

"Take it in," he told the women when they walk in on him ironing his pants. According to First Daughter Bush, this wasn't the first time THIS week he's done it.

Al Roker doesn't have pants on

I'm not surprised by this, but still. Let's give this guy some self-deciency. He delivers accurate weather predictions like 50 percent of the time.

Sal, the prop guy, is not having a good day

Meet Sal, he's our protagonist in the world of Matt Lauers. He wants to be a star.

No one knows why she is so hungry (HA!) to sabotage Stewart, I don't even know if she knows, but dammit, she is going to make this meat taste terrible.

Again, is there no respect? National monument.

"That will show him who is the king of hosting TV shows," Regis Philbin's possible thoughts.

Regis eats Bianca's sabotaged food, because why not?

KLG tells this to Hoda and Hoda is SO over this musical. The spleens are never brought up again.

And honestly, people just let him run with it... A Sharknado isn't even his least accurate prediction.

A spot of truth behind this veiled curtain KLG has created for us. But these two are only here to snicker that the spot is up for grabs. That's it.

Sal shoves Regis to the ground, like any true star realizing his potential

Meanwhile, Regis is keeling over from a fart attack from the sabo-meat he ate.

More like this
Jason Derulo Is Launching A New Singing Show In The UK
By Maxine Harrison
18 Years After 'American' Idol, Jennifer Hudson & Simon Cowell Reunited On Her Talk Show
By Radhika Menon
What’s New On Netflix: Ana De Armas’ 'Blonde' & A Nick Kroll Special
By Arya Roshanian
What’s New On Netflix: Meet 'The Real Bling Ring'
By Arya Roshanian
Get Even More From Bustle — Sign Up For The Newsletter