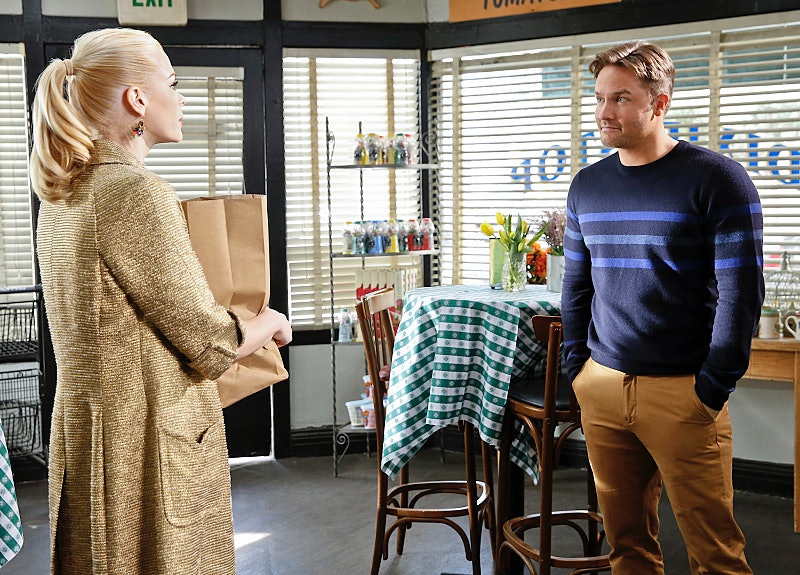 When Hart of Dixie returned Dec. 15, it was a complete tease for all of the Bluebell fans who were dying for some answers. The CW very cruelly gave us a one-hour peak at the highly anticipated fourth season and then tore it away for almost a month. But the Jan. 9 premiere of Episode 2, The Curling Iron, is nearly here and now that we know whose baby Zoe Hart is having it's time we got a look at some of the other characters. Bluebell's small-town sweetheart Lemon Breeland came home early from the singles cruise with a severely attractive and extremely accomplished new boyfriend and he is just the kind of man her family was hoping she'd end up with. But the relationship is a total lie and Lavon and George are in a war for her heart, so who will Lemon choose in the end?

Executive producer Leila Gerstein told E! Online that the writers are on a mission to give the small-town Alabama denizens a little closure before season's end since there's no telling whether or not the fourth season will be HoD's last. In other words, it is absolutely imperative that Lemon makes a choice — even if it takes until the final episodes. As far as we know, Lemon has four plausible options for her romantic endgame and here's the odds for each potential suitor:

Final season or not, Lemon can't end up with a totally new character. Where's the fun in that? The new doc is perfect on paper, but that's exactly the opposite of who Lemon wants. She's already admitted to the faux relationship, and it's not even like her Carter-Enrique days when they were both head over heels for her. This guy is using her just as much and she is using him. My guess is that he sticks around a bit longer, but only long enough for Lemon to shield herself against the pain of choosing between the two loves of her life.

Once upon a time, George was the wrong guy for Lemon and Lavon would've had a shot, but she's different now. She may have been in love with Lavon in the past, but she grew out of it. If she hadn't, there's no way Lemon would have been okay with Annabeth temporarily taking her man. Meanwhile, Lavon very clearly belongs with A.B. and it's only a matter of time before he comes to his senses enough to figure it out.

Herself — If Anyone Ends Up Alone, It's Lemon

Lemon has always been the strong, independent heroine of the story. She's proved time and time again that she is more than capable of making it on her own, so it wouldn't be all that surprising if she ends up in a committed relationship with herself. But that would be really boring for this romantic drama, and altogether disappointing considering Hart of Dixie has sold us all on its romantic entanglements. If this is the last season, I predict all HoD protagonists end their stories with a romantic counterpart.

Now that Zoe unquestionably belongs with Wade, George can theoretically end up with almost anyone else — including Wade's ex Tansy Truitt. But in the battle for Lemon's heart, George Tucker is the obvious choice. Like I said, Lemon's changed, and George sees it. She can't possibly pretend the night they recently spent together meant nothing to her. Their working together to bring back Fancie's proved that the chemistry is still there. George has always loved Lemon, he just forgot. It's because they drive each other crazy that they belong together, and if Lemon only knew how he felt, she'd realize she feels it too.

More like this
Dixie D’Amelio & Noah Beck “Love Each Other” Despite Breakup Rumors
By Julia Emmanuele, Jordyn Tilchen and Grace Wehniainen
In Elizabeth Strout’s Novels, The World Changes But People Stay The Same
By Morgan Leigh Davies
At 14, Jurnee Smollett Was Taking Meetings With Missy Elliot & Lauryn Hill
By Chloe Foussianes
Shonda Rhimes' Net Worth Makes Her One Of The Wealthiest People In TV History
By Hugh McIntyre
Get Even More From Bustle — Sign Up For The Newsletter