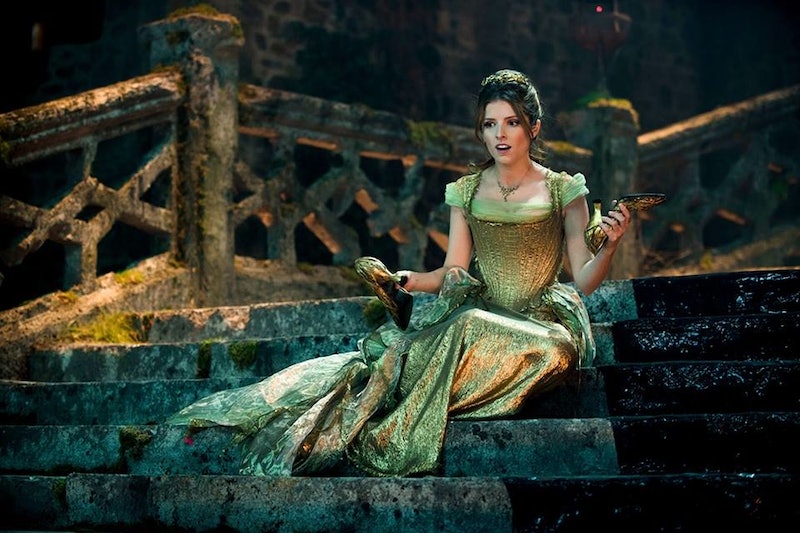 The dark twists on familiar fairy tale characters in Into the Woods aren't all drastic, and in spite of some bloodshed throughout the story, there are some happy endings. But instead of spoiling every relationship, I'll hone in on Anna Kendrick explaining the modern, feminist Cinderella she portrays in the film version of the iconic Stephen Sondheim musical. This updated version of the princess isn't about a fairy godmother transforming her for the ball and her losing a glass slipper. Instead, she flees three separate times from Prince Charming at his royal festival and decides to leave behind one shoe for him to find. Taking matters into her own hands happens twice: first as she flees for the final time (after she gets stuck in tar and sings "On the Steps of the Palace") and second when she confronts the prince about his infidelity and breaks things off. Here's how Kendrick explained this 21st century princess to Vulture:

"What's interesting about this version, and what's very modern about this one, is that not only does Cinderella leave her prince, but she leaves with forgiveness and respect and compassion for the prince. It's not black and white for her. It's not even black and white for the prince, who lives a pretty black-and-white life. There's a moment that's basically, 'This isn't our path.' [Prince Charming says,] 'I shall always love the maiden that ran away.' [And Cinderella says,] 'And I the faraway Prince.' There is something extremely relevant and modern about the idea of civility in separation."

As Kendrick explains, modern Into the Woods Cinderella won't go back to a cheating husband, but she doesn't have an epic freak out about it. She accepts that things have changed and that she and the prince will always love the old versions of themselves, but they're both better off separately. This empowerment is fantastic, and her strong feminist side comes out throughout the musical. There's only one way that Kendrick could top this explanation — oh, wait... she did with this amazing meme on Twitter. Again, Anna Kendrick for president, please.