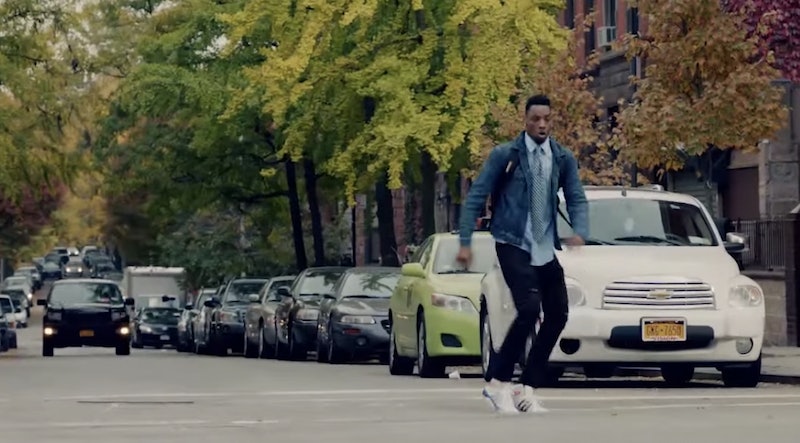 We lost a great many wonderful people during the course of 2014; one of the ones we felt most keenly was Maya Angelou. But her legacy is alive and well, and the newly-released music video for “Harlem Hopscotch” proves it. First published in 1969, “Harlem Hopscotch” is one of 13 poems to have been given the hip hop treatment on Angelou’s posthumous album, Caged Bird Songs; and now that the first video is out, the world is clamoring for more.

At the time of her death, Angelou had been working on Caged Bird Songs in collaboration with music producers Shawn Rivera and RoccStarr. Angelou recorded recitations of her poetry; Rivera and RoccStarr worked on putting together the beats; and together, the results form a totally unique album the likes of which we’ve never seen before. “Music was such a huge part of my grandmother’s life,” Angelou's grandson, Colin A. Johnson, told Vibe when “Harlem Hopscotch” debuted in September. “She loved everything, from pop to country and, of course, hip hop. With her dedication to social activism and how she illuminated the struggles and injustices of the urban experience through prose, there’s a direct correlation to hip hop today. She was really excited about her words being presented in this way and I’m glad her fans will now be able to hear it.”

And the “Harlem Hopscotch” video itself? It’s cool. It starts with a few people turning a game of hopscotch into increasingly impressive displays of hip hop dancing; then it becomes an even bigger group of people hopscotching their way across Harlem; then it expands across the country, to the West Coast, and even finally makes its way to the moon. It’s fun and catchy, with an infectious sort of enthusiasm that even makes me want to get up and dance — which is really saying something, as I have the proverbial two left feet firmly attached to my ankles.

I think, though, that as neat as the video is, it’s worth taking a look at Charing Ball’s take on it over at Madame Noire. I can’t speak to the Black experience in America, which is why I think it’s so important to draw attention to voices who can. Ball, for example, points out that the poem is specifically about “childhood poverty, struggle, wealth, work, and leisure in the African American culture,” all of which seems to be absent from video. Ball writes:

“And I get it: Poverty is depressing. I mean, who really wants to watch a video of some sad-face poverty stricken Black kids, playing chalk hopscotch in the age of Playstations and iPads? Nobody. I don’t even believe Dr. Angelou intended that with the poem when it was drafted in 1969 — at likely the height of poverty in Harlem. But when the alternative is to create visuals of a multi-racial bunch of celebrities as well as random White people dancing in streets, which are not Harlem, we kind of gloss over what Dr. Angelou really wanted us to pay attention to in the poem.”

For that reason, the “Harlem Hopscotch” video is perhaps a little more problematic than we might wish. Food for thought.

At the same time, I do also think there’s something to be said for the fact that video widens its scope. There’s a reason Angelou’s words resonate so strongly with so many people of so many different backgrounds, and I think that’s one of the things this iteration of “Harlem Hopscotch” might be getting at. These issues do affect all of us, regardless as to who or what we are, which, as Hannah Ongley wrote over at Styleite, might just make “Harlem Hopscotch” the most relevant music video of the year.

One thing’s for sure, at least: It’s continuing the conversation we so desperately need to be having right now. Take a watch below.