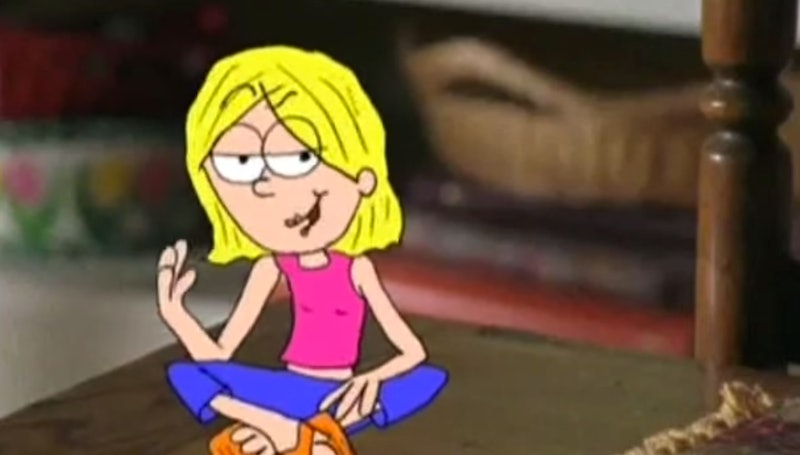 Over 10 years ago, Disney Channel original series Lizzie McGuire drew to a close. Star Hilary Duff has remained in the limelight, but it's been a while since we've heard from the other Lizzie: Animated Lizzie. Yes, I do mean the cartoon who served as the titular character’s inner monologue throughout the series. Curious to find out what she's been up to in the last decade, I reached out to Animated Lizzie. She was kind enough to grant me an interview. Here's what the 2D actor told me about life after Lizzie:

She quit showbiz for good

Toward the end of Season 2, Animated Lizzie realized she didn’t really care for acting. Yes, she was created for the TV show, but that doesn’t mean she enjoyed her job. After Lizzie McGuire ended, Animated Lizzie decided she was done with existing for the cameras. "I wanted to exist for myself," she tells me. "I needed to move on."

She never watched the show

Animated Lizzie says she's never actually seen Lizzie McGuire because it was always "too uncomfy" to watch herself on TV. She adds that she thinks enough time has passed, and she looks forward to checking out the show when the reruns hit ABC Family on Monday Dec. 29.

Yes, it chronicles her time on Lizzie McGuire. Dying to read what Animated Lizzie has to say about what it was like being the only cartoon on the popular Disney Channel TV show? Don’t get your hopes up: Animated Lizzie isn’t sure she wants to publish it. She says it’s “more of a personal scrapbook and journal at the moment, but maybe one day I'll change my mind."

She obtained a degree in physics

Animated Lizzie says she's "always found Newton's laws of motion to be fascinating. A challenge, even. Cartoon world physics is so different."

Animated Lizzie is really into making jewelry (turquoise is her stone of choice). Every Saturday morning, she can be found hocking her wares at the popup farmer’s market held in the parking lot in front of the Verizon store down the street from her house.

She’s friends with someone from Clone High

Animated Lizzie is best friends with Animated Joan of Arc from the short-lived MTV masterpiece that was Clone High. The two met at a mutual friend's party, bonded over moving on from The Industry, and have been "inseparable" ever since.

She looks exactly like she did a decade ago

Ah, to be a cartoon!