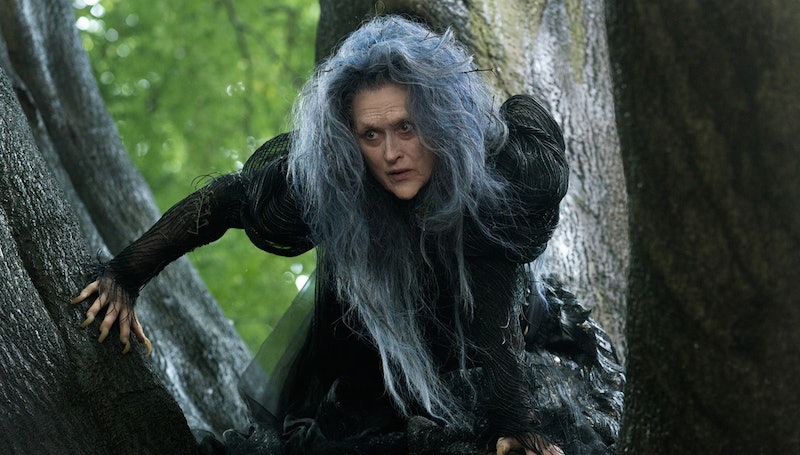 Anything can happen in the woods… even death. And unfortunately, that's exactly what happens in Disney's Into the Woods movie. Sure, the film doesn't contain quite as many tragic deaths as its Broadway counterpart, but it's still enough to make any thoughts of a happily ever after seem like a distant memory. And that's not even factoring in all of the eyes that were gouged out whether by birds, thorns, or otherwise. Basically, what I'm trying to say here is that this musical — while extremely smart and well done — can also be pretty dark and depressing at times. I guess that just goes to show that even fairytales aren't immune to life's many twists and turns. So who exactly dies in Into the Woods ? Let's have a quick rundown through this not-so-merry list, shall we?

WARNING: only tread down this path if you've already seen the film. Major spoilers ahead!

I thought we'd start out with some of the least depressing goodbyes of the bunch. That's not to say that these giants deserved such a grim fate, but I think it's safe to say the male giant definitely overreacted a bit when Jack stole the magical harp. I mean, dude was cool with giving up golden eggs, but a singing harp was out of the question? Strange priorities, my friend. But hey, to each his own. Meanwhile, the giantess had a much better incentive for everything she did, but I'm sorry — no matter whose fault it was (it was your fault!), I'm going to root for Jack every time. He's just too adorable to give up. But RIP giants. We hardly knew you.

Let's be honest, this fedora-wearing wolf had it coming what with eating grannies, little girls, and such. However, I would've liked to have seen Johnny Depp a little more than what the movie allotted, especially since there was so much hype surrounding his particular casting. So to only have him appear for 10 minutes (at best) throughout the entire production seemed a bit odd. But enough of my huffing and puffing. (Thank you, I'm here all night, folks.) The point is this wolf has howled his last howl and will never darken the doorstep of any innocent victim ever again.

Here's where things started getting really depressing, especially since it was done completely by accident. As the giantess demanded to know the whereabouts of Jack, his mother immediately came to his aid, but was shoved aside by the king's Steward and fatally hit her head on a fallen tree. So just like that, poor Jack became an orphan. But at least he still has Milky White, right?

Proving that no bad deed goes unpunished, just after having a romantic encounter with Cinderella's prince, the Baker's Wife ends up falling from a cliff, leaving her newborn baby motherless, much like Jack. But the truly tragic part came afterwards when Corden's Baker found out the terrible news and realized he'd be raising their child all on his own. It's a scary prospect for any parent to have to face, but one that Corden managed to pull off beautifully, and thereby making his loss all the more upsetting.

This, I would say, is completely up for interpretation. I chose to believe that when the Witch threw away her beans, she simply vanished and reverted back into her old and ugly self somewhere else in the world. Is that naive? Maybe. Or perhaps I just don't want to live in any world where Meryl Streep doesn't exist in one form or another. (Can you blame me?) Then there are others who will undoubtedly believe she chose to end her life just to escape from the humans and their petty blame game antics. Which (witch?), fair enough I guess.

However, it's a sentiment I would be much more inclined to believe in had Rapunzel actually died like she did in the original Broadway production. That would've at least given more weight to why the Witch would no longer care about staying alive if her child was already gone forever. But alas, that's not what happened here, which makes me seriously question the whole death theory, though it's definitely still worth noting due to the finality of her exit. Like I said before… anything can happen in the woods. And that's part of what keeps drawing us back in.