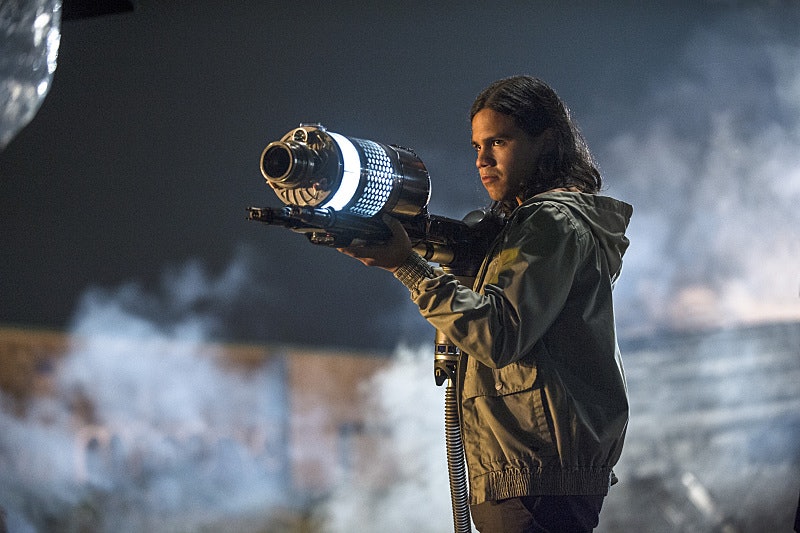 While we still might be wracking our brains over the true identity of Harrison Wells, The Flash has at least brought in two already established characters to hang out with Barry Allen. One of them, Caitlin Snow, doesn't seem to be leaning really into her comic counterpart, Killer Frost (but that could all change once Firestorm really comes into the picture). And what about The Flash's other partner in crime, Cisco Ramon? In the comics, he's got a pretty filled out storyline, but so far all he's really managed to do on The Flash is give nice little Big Bang shoutouts. Is there a chance that Cisco could become the comic character Vibe?

In the DC Comics, Francisco "Paco" Ramon is a metahuman from Detroit who can can basically make things vibrate through intense shock waves — thus, the name Vibe. He's part of the Justice League, and has died twice, only to be resurrected twice. So, you know, the usual metahuman stuff.

Could our Flash Cisco ever meet this same fate, let alone become the same comic character? So far, The Flash has solely painted him as a mechanical engineer and he's doing a pretty good job at it, too. No one, not even the executive producers of The Flash, seems to be rushing into any sort of Vibe character, though it is on their minds. EP Andrew Kreisberg told Entertainment Tonight, “Hopefully we’ll have a long and successful run and I’m sure at some point, it will happen."

So it looks like everyone is playing coy with that topic, including Carlos Valdes, who plays Cisco and told DC Comics that any idea of him becoming Vibe is "kind of up in the air." He then added, "Cisco Ramon will potentially become Vibe, that’s not really our concern right now." It might not be your concern, but it is certainly my concern.

It's highly doubtful that the Cisco we know and love on The Flash will somehow become exposed to another particle accelerator explosion, and wake up with the ability to send shock waves through Central City. Something like that just isn't going to happen — and if it were to happen, it would have happened at the same time Ronnie became Firestorm, you know?

But, I could totally see Cisco creating some sort of contraption — like the many other things he's created, including Barry's supersuit — that emits the same kind of power, and gives him the ability to vibrate things, no metahuman powers required. Can't you just see Caitlin's eye roll when he first tries something like that out?

The only thing that might get tricky about this, is that Cisco will then be the one to give himself a cool nickname, like what he's done with every other metahuman who's rolled into town. Do you think he secretly has a hobby that involves a lot of vibrations? That'd be one way to get the nickname Vibe.

More like this
Harry Lawtey Is Weighing Up The Price Of Success
By Olivia-Anne Cleary
This Episode 6 Moment Foreshadows Viserys' Fate On 'House Of The Dragon'
By Grace Wehniainen
Nicola Coughlan Shared A Lady Whistledown Excerpt From ‘Bridgerton’ Season 3
By Grace Wehniainen, Alyssa Lapid and Sam Ramsden
Everything To Know About 'The Last Of Us' TV Adaptation
By Sophie McEvoy and Radhika Menon
Get Even More From Bustle — Sign Up For The Newsletter