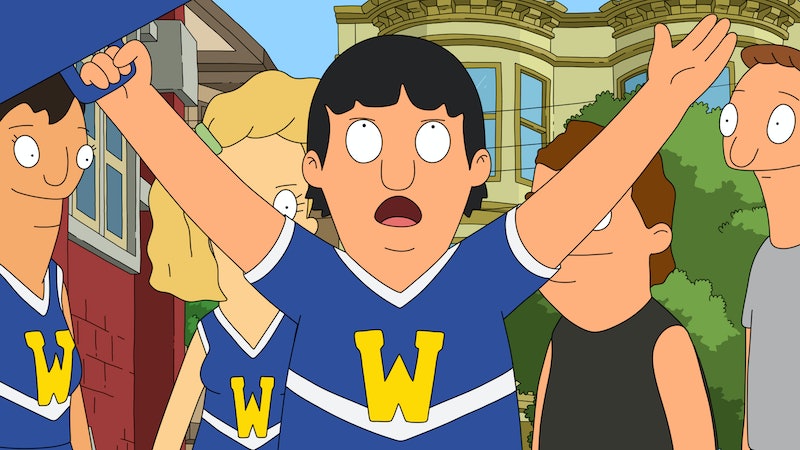 The holidays are a hectic, stressful and wallet-obliterating time of year. It can bring on more adult acne than a pepperoni facial. The one thing that has given me peace and solace in this time of over-spending and familial overloads, is re-watching Bob's Burgers . Immersing myself in the world of the Belchers has not only provided much-needed laughter, but it's also made me feel less alone in my insanity. There is nothing that will make you want to fly your freak flag quite like Louise. Amidst the incredible Burger of the Day listings, Tina's butt-centric obsessions, and Linda's many musical numbers I've noticed something quite major about the show: Gene Belcher is highly underrated.

When it comes to the kids, Tina is above and beyond the favorite amongst fans. Her loud and proud feminism mixed with her neverending groans and unicorn obsessions have made her the unlikeliest voice of a generation. Louise's popularity has been upped by the many adoring fans of her voice, Kristen Schaal. Her bunny hat and downright maniacal antics have helped boost Team Louise. Gene remains the dark horse, despite his shamelessness, powerful megaphone, and killer keyboard. Bob and Linda will forever be at the core of the series, as the two captains navigating the S.S. Belcher.

It's high time Gene deserves a little more recognition. He gets funnier every episode and has some of the most under-the-radar lines of the show. Here's why 2015 needs to be the year of the subversive and sublime Gene Belcher:

He Would Never Complain About Being Friend-Zoned

He Understands Your Feelings About Sports

Me too Gene, me too.

And He Knows How to Deal With Them

He Really REALLY Understands Your Feelings on NYE

He Shares Your Deepest Desires

It's the simple things in life.

He Shares Your Beliefs

Long may she reign.

He Doesn't Believe in Gender Roles

Just your average kid, challenging normativity like it ain't no thang.

He Just GETS IT

More like this
The Best 'Grey's Anatomy' Intern Moments, From MAGIC to Glasses
By Grace Wehniainen
24 Years Ago, 'Friends' Dropped Its Most Underrated Ross & Rachel Episode
By Grace Wehniainen
Netflix Reveals First Look At Wednesday In The 'Addams Family' Spinoff Series
By Bustle Editors
Ekin-Su & Davide’s ITV Travel Show Finally Has A Name
By El Hunt and Sophie McEvoy
Get Even More From Bustle — Sign Up For The Newsletter