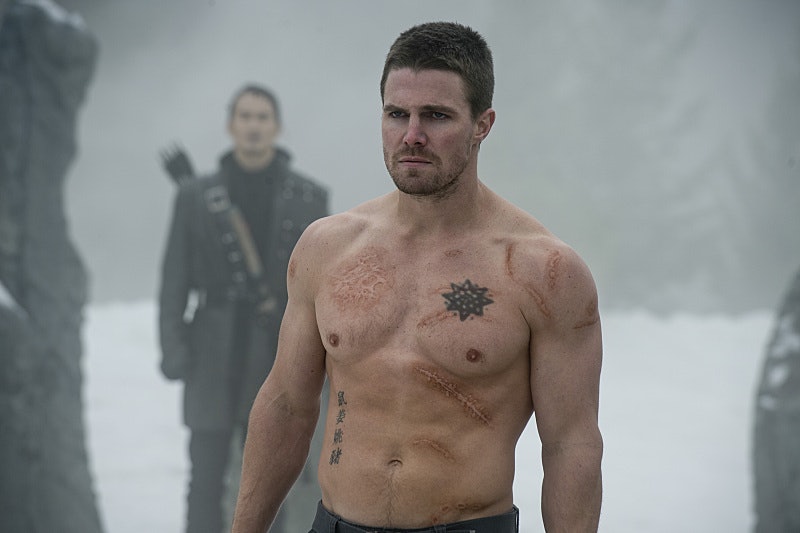 We're currently living in a world where the idea of Oliver Queen dying on his own show, Arrow, is a very real and ominous threat. Arrow's midseason finale actually had Oliver — supposedly — dying. I mean, he looks mostly dead, and considering the fact that he was stabbed through the chest and then pushed off a cliff onto the rocks below, we could wager that he is pretty dead. The show wouldn't kill off its title character though, would it? What would Arrow without Oliver even look like?

There aren't many shows out there where the main character gets killed off, because that kind of defeats the main purpose of the show, right? I can't even think of a good example where the main character was killed off and the show continued on without its protagonist. It's just not a thing that happens. And of course in saying that, Arrow probably would be the show to kill off it's main character, just to prove to us that it can do whatever it wants, since it's one of the best shows on television right now. But we'd miss Oliver terribly.

So, for argument's sake, let's assume that Oliver is dead (cue: indiscernible wailing from literally everyone). What would Arrow without its Arrow look like?

If there's one character who needs her own show, it's our tech wiz Felicity Smoak. After she gets through the whole mourning Oliver Queen phase, attention can be turned to Felicity simply being awesome and kickass at whatever she does. Will she try and save Starling City like it's fallen hero? Or would Arrow give us the show we all secretly yearn for, which is a simple TLC-type What Not To Wear show, but it's just Felicity shopping because we all secretly crave her wardrobe? So, we just follow Felicity to the mall while she shops in Anthropology. And then we watched her shop online at ModCloth and NastyGal. And every now and then Arrow throws us like a 20 percent off our next online order coupon, so we can dress just like Felicity too. (Not that I've ever thought about a Felicty Smoak shopping show before.)

Laurel, now with her special vigilante training, continues to do Starling City right, by day and by night, and becomes everyone's go-to girl for everything. She's taking names and kicking butt, but I imagine everything about Laurel is now produced by Dick Wolf. She becomes a much more hardened character, and slowly starts morphing into Olivia Benson (the Law & Order character, not Taylor Swift's cat).

Though she might slowly be turning evil, Thea finds her away again after Oliver's death, and makes her way back to Roy. Roy, still grappling with basically everything that's been thrown his way for the past three years, obviously takes Thea back with open arms. The two of them decide to continue to run Verdant together, naturally. But I also secretly wish that their adventure together becomes something more 30 Rock-esque, and becomes mildly ridiculous. Don't you want to see the crazy hijinks that goes on after Verdant closes, too?

It's hard trying to figure out what would happen to Diggle, Lyla, and Sara should Oliver not return to Starling City. We haven't seen a whole lot of their home life, so what would it be like if we suddenly only focused on their home life? Would it be lots of situational comedy, like a real sitcom? Would Lyla yell at Diggle for not unloading the dishwasher? However, I could easily see the family using this as their excuse to get the hell out of Starling City once and for all. They move to the country, buy a dog, build Sara a swing set, and send a Christmas card once a year to the old gang — that's it.

It's a good thing that this is all merely speculation, because Oliver can't really be dead, right? The only acceptable way he could actually die on the show, is if he comes back as a shirtless vigilante ghost.