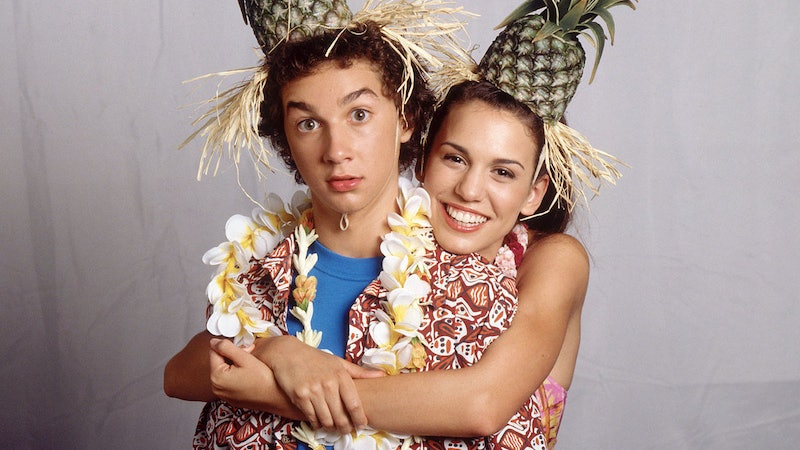 Flashback to 2004: In between episodes of Degrassi, I'd flip over to Disney Channel to indulge in my second guilty pleasure — Even Stevens. It was a quirky, clever, and off-the-wall wacky comedy about rival brother and sister duo Louis (played by Shia LaBeouf, pre-paper bag apology) and Ren (played by Christy Carlson Romano). 10 years later, ABC Family has decided to ring in 2015 with a "That's So Throwback" marathon of the classic Disney Channel shows of the aughts — which includes the airing of several episodes of Even Stevens on Wednesday night. Sadly, the brilliantly meta Even Stevens Movie won't be part of this marathon, but you can totally watch it online.

The Even Stevens Movie aired in 2003 to cap off the three seasons — totaling 65 episodes — as the series finale. The Stevens family gets offered a free vacation on a tropical island — and it turns out to be part of a reality TV show called Family Fake Out. Hilarity, of course, ensues in true Even Stevens fashion and it does not disappoint. Luckily, you can celebrate Throwback New Year's Thursday by watching the made-for-Disney-Channel movie from the comfort of your laptop.

The Even Stevens Movie is currently available for purchase from all of your favorite places to buy stuff: Amazon Instant Video, Google Play, YouTube, and iTunes. The price is about $7.99 for the digital version, but trust me, it's worth it if you want to relive the hey days of the Disney Channel before the meh Phil of the Future. It's not that Phil was bad, he just wasn't the same, you know? Or if you'd rather just watch it once, or just part of it (though again, I highly recommend going for the full purchase), you can find it on YouTube.

Buy It on DVD

If you're reading this and nodding along with the Even Stevens love, then right on! Nice to meet another fan. You'll also be happy to know the TV movie is available for purchase on DVD in a variety of places like Amazon and Best Buy, so you can watch the final hurrah of the series over and over again, and flashback to the innocent days of LaBeouf as often as you'd like.