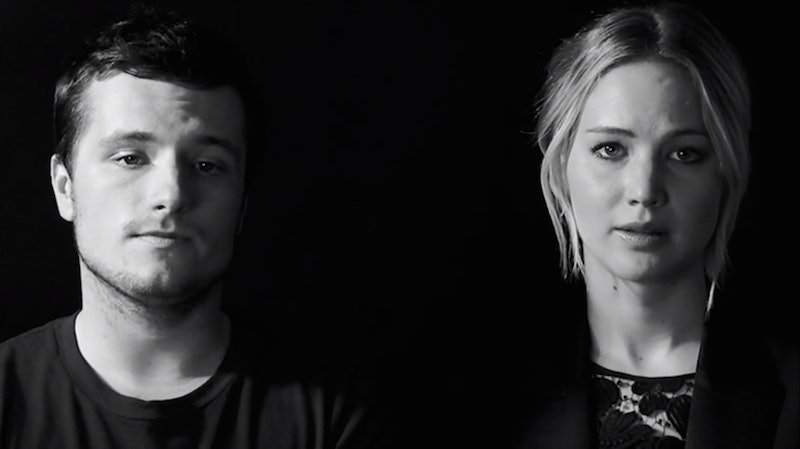 At this point, we are all well-aware of the Ebola epidemic that reached a fever pitch in 2014. At one point, it seemed like we couldn't go a week without a new case being discovered and quarantined somewhere in America. However, the solemn-faced Hunger Games stars, including Jennifer Lawrence, Josh Hutcherson, and Liam Hemsworth, take time in the video to point out that every single one of the Ebola sufferers that were treated in American hospitals survived — meaning that the actual part of Ebola that is "deadly" is not having access to the proper care, not the disease itself.

Despite Lawrence's status as America's sweetheart, it is honestly Hutcherson who comes across as the most charming part of the PSA. He seems almost uncomfortable staring stonily into the camera like his counterparts and instead directs his comments mainly to Lawrence, as if they're having a conversation rather than parroting back facts. In fact, at certain points, he seems just as thunderstruck by what they are reporting as we're expected to be, and that just makes it feel all the more real.

Overall, it was a short but poignant way to raise awareness about being actually aware of the facts rather than giving in to blind panic about Ebola. Check out the PSA below.

More like this
Britney Spears Shares Unknown Details Of Conservatorship In New Voice Notes
By El Hunt
Zac Efron Set The Record Straight On *Those* Plastic Surgery Rumours
By Sophie McEvoy
After The Bling Ring, Nick Prugo Was Embroiled In Another Scandal
By Arya Roshanian
Alec & Hilaria Baldwin Gave Their 7th Child Another Version Of The Name Hillary
By Stephanie Topacio Long
Get Even More From Bustle — Sign Up For The Newsletter