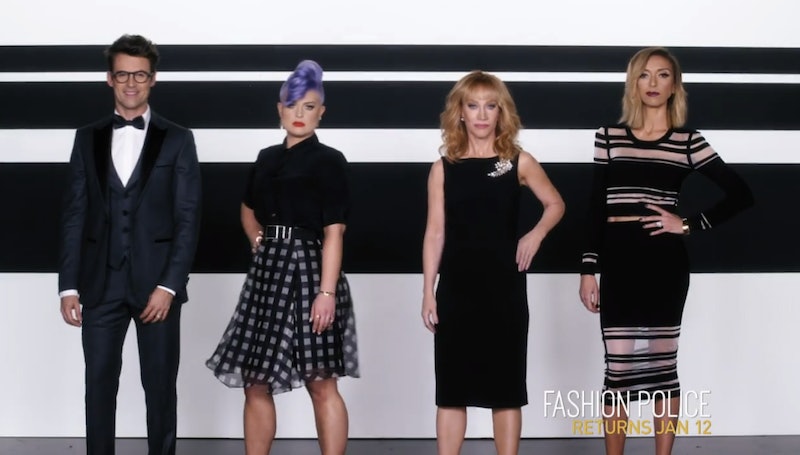 We're another step closer to a new season of Fashion Police and the first season of the E! Network show that won't star the late legend Joan Rivers. Old fans of the show would be nervous enough about Kathy Griffin taking over Fashion Police from her friend, but that's far from the only change that's being made to the show going forward. From changing the focus of the show to changing the number of episodes, it seems like very little will remain to let fans know they're watching the same show, aside from returning judges Kelly Osbourne and Giuliana Rancic. However, Griffin's first Fashion Police promo has been released and it should be the soothing balm that wary fans need.

The 30 second promo introduces judges Osbourne, Rancic, Griffin and, of course, Brad Goreski, who is taking the place of former panelist George Kotsiopoulos. It features the trademark snarky puns and gorgeous fashion that you've come to expect from the people who will be telling other people how to dress, not to mention showing off the cast chemistry that's already obvious from this short promo alone.

I don't know about you, but as a viewer of the Fashion Police, I would be most worried about whether the new roster and format changes could capture the same magic the show had during Rivers' stint. And, if that's what you're looking for, then I'm afraid you've about to be very disappointed. Rather than trying to capture the magic of Rivers, Griffin is adding a new charm all her own that longtime fans will either love or hate. However, it's my sincere hope that fans give Griffin the chance she deserves to prove herself, because she already looks like she is having so much fun and the season hasn't even started yet.

Check out the promo below and get ready for another fabulous episode of Fashion Police when the season premieres on January 12.

More like this
'Selling Sunset's Vanessa Married Her British Beau Nick In A “Fairytale” Wedding
By Darshita Goyal
What’s New On Netflix: Ana De Armas’ 'Blonde' & A Nick Kroll Special
By Arya Roshanian
What’s New On Netflix: Meet 'The Real Bling Ring'
By Arya Roshanian
Jinkx Monsoon Is About To Get Real Sketchy
By Sam Ramsden
Get Even More From Bustle — Sign Up For The Newsletter