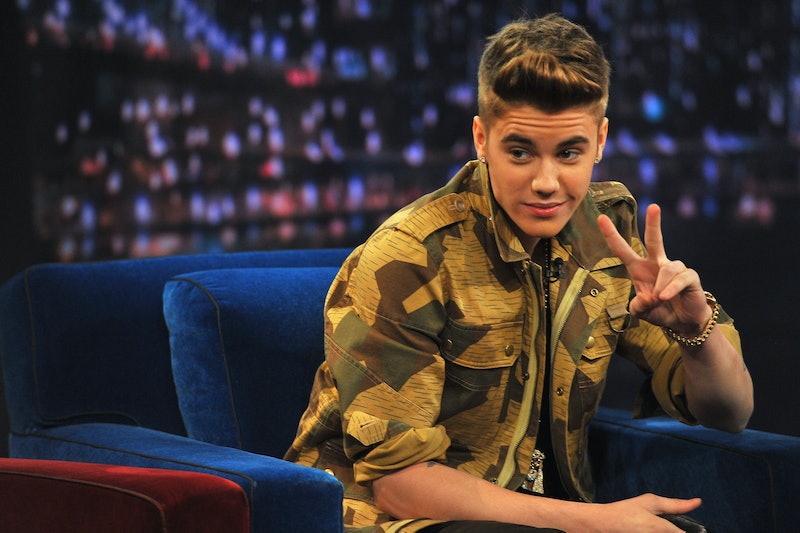 So, Justin Bieber is in legal trouble again. Quite honestly, that sentence is as unsurprising as saying the sun has risen again or Beyoncé has been flawless again, but it's at least noteworthy because it's been, like, two months. That's got to be some kind of record for him. This time, it appears Bieber is being sued for a 2013 assault that he didn't even commit — at least, not directly. According to TMZ, model Wayne Rennalls wants Bieber to pay damages for a violent brawl in which Bieber's bodyguards essentially beat the ever lovin' crap out of Rennalls. Unlike, say, when Bieber punched a paparazzo in Paris, he didn't actually lay a hand on Rennalls. Or did he?

See, the TMZ report simply states that Rennalls is coming after Bieber because Bieber is the one who cuts the checks to the men who beat him up, making Bieber financially responsible for what they do. However, Rennalls' lawsuit is only his most recent. He has been trying to get justice for the assault since it actually occurred in August 2013. At the time, he claimed Bieber had participated in the brawl by kicking him, and that women (and a bowtie) were the cause of the fight. According to Rennalls, Bieber was trying and failing to get female clubgoers to join his crew. At some point, one waittress asked to borrow Rennalls' bowtie and then left with Bieber. When Rennalls went outside to get it back, a fight broke out.

"Justin Bieber [was] still running his mouth and I took my shirt off to fight," said Rennalls in the Daily News. "That’s when they all hopped out of the truck and bum-rushed me. They said, 'That’s your f***ing a**,' and the first one came to me, and I put my hands up to fight, to protect myself."

The lawsuit against Bieber went nowhere since, according to TMZ, "he didn't touch anyone," but Rennalls' new suit says the singer is still the one who owes him damages for the missed modeling jobs his injuries have caused. He is also suing the club at which the brawl took place for supplying the underage Bieber with alcohol since, presumably, a sober person would not send a group of men to beat up a person for trying to get their bowtie back.

On the one hand, I can't honestly say I believe Bieber deserves to be sued personally. The only verifiable thing he did in the brawl was jump out of the caravan and, since the cameras didn't pick up what happened next, he could have been hopping out to break up the fight. However, given the work that Rennalls missed out on due to his injuries, it's quite possible that the damages could total millions of dollars in lost ad campaigns and cover shoots. I don't know how much Bieber pays his bodyguards, but that kind of suit sounds like it could bankrupt each and every one of them. Not that I'm saying they deserve to get off scot-free for the assault, but I can see why Rennalls would go after Bieber rather than them.

How likely is it that Rennalls is going to get compensation? Given Bieber's miraculous ability to Houdini his way out of every legal issue that crops up in his path, I would say slim to none. This is one of those cases where I can see the point of both sides, however. It has been over a year for Rennalls, whose career could very well be over. But, in this single case, Bieber didn't actually do anything, so does he deserve to be the one paying for the crime? I guess we'll just have to wait and see how it all turns out.

More like this
Hailey Bieber Just Responded To *That* Viral Met Gala Moment
By Radhika Menon and Sam Ramsden
At 28, Melanie C Was Falling In Love & Reclaiming Her Confidence
By Olivia-Anne Cleary
Kesha Is Down To Be The Next Bachelorette
By Jake Viswanath
Everything To Know About Taylor Swift’s 10th Studio Album, 'Midnights'
By Grace Wehniainen and Jake Viswanath
Get Even More From Bustle — Sign Up For The Newsletter