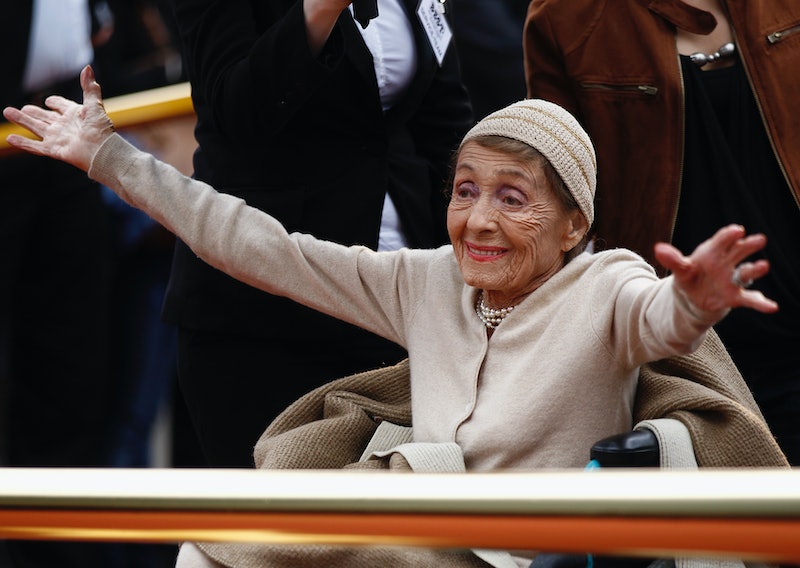 It's a sad day for Hollywood both new and old today: According to Deadline, legendary actress Luise Rainer passed away at the age of 104 on Tuesday at her home in London. She was a major player during Hollywood's golden age, so while her name or the names of her most successful films may not seem hugely familiar to most, the legacy this actress left definitely does: In addition to appearing in some of the biggest films of the '30s, Rainer was also the first woman to win an Oscar two years in a row, once for 1936's The Great Ziegfield and the following year for 1937's The Good Earth. As USA Today points out, since Rainer achieved the feat, only four other actors — Spencer Tracy, Katharine Hepburn, Jason Robards and Tom Hanks — have ever managed to do so as well.

In addition to roles in The Great Ziegfield and The Good Earth, Rainer also appeared in a lot of German stage roles, as well as the popular 1960s series The Love Boat.

Sadly, her career was said to taper down after her Oscar wins, as did the careers of many actors who won Oscars during that same era (it was so common, in fact, that it was referred to as the "curse" of the Oscars): In 1999, Rainer said in an AP interview about her wins, "When I got two Oscars, they thought, 'Oh, they can throw me into anything.'"

According to reports, Rainer's daughter Francesca Knittel-Bowyer confirmed her mother's death, which was reportedly due to complications from pneumonia.

More like this
Lashana Lynch’s 'Woman King' Training Was “Traumatizing” For A Relatable Reason
By Radhika Menon
How To Stream 'The Woman King'
By Morgan Leigh Davies
What Is Miles Teller’s Net Worth? The 'SNL' Host's Bank Account Is No Joke
By Meg Walters
Lin-Manuel Miranda & Tituss Burgess React To 'Little Mermaid' Casting Backlash
By Radhika Menon
Get Even More From Bustle — Sign Up For The Newsletter