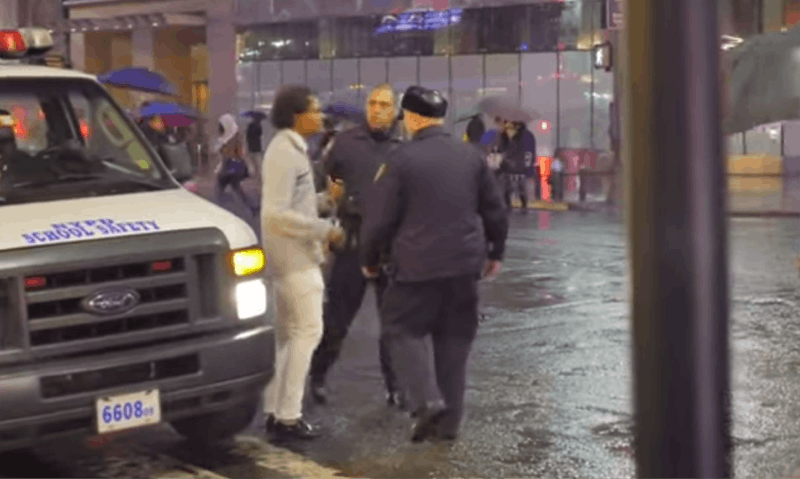 By now, it is common knowledge that if Ellen Degeneres throws down a gauntlet, you boss up and rise to the occasion. That's exactly what Alexander Bok, YouTube prankster, was trying to do on Christmas Eve in New York City. I imagine there are plenty of hazards a prankster can expect to face when he's dancing Gangnam Style behind strangers and casually pretending to be strolling by when they turn around, but I was thinking hazards like mild embarrassment or awkward explanations. But things got much more serious for this guy—Bok was thrown to the ground by the NYPD for dancing in the street behind them.

Yes, that is one of the most ridiculous sentences you will ever read, but you have to watch the video to see just how insane it really is. While it is entirely predictable given the climate that the NYPD has experienced the past few weeks that they would be tense, nothing justifies the bullying and genuine cruelty that they throw at Bok, who was—let me repeat—dancing in the street. In fact, you might reasonably argue that this kind of behavior is why that "tense climate" exists between the people of New York and the NYPD. Shrug. Anyway.

When the first cop grabs him they immediately start to demand, "Why are you dancing in the street? What the f*ck is wrong with you?" Another one asks, "Are you a f*cking asshole?" The encounter goes on for several minutes, but the most bone-chilling part of the video (all of this was captured by his friend, unbeknownst to the cops) is when the men shove him to the ground, on a roadway, might I add. Bok says that despite his numerous attempts to explain, all four cops that cornered him continued to insult him. That's right, four cops. So glad that the city is being protected from the shenanigans of one happy-go-lucky street dancer that the energies of four cops are needed to "take him down."

What started out as a hilarious prank video ended up as yet another haunting message about the abuse of police force.