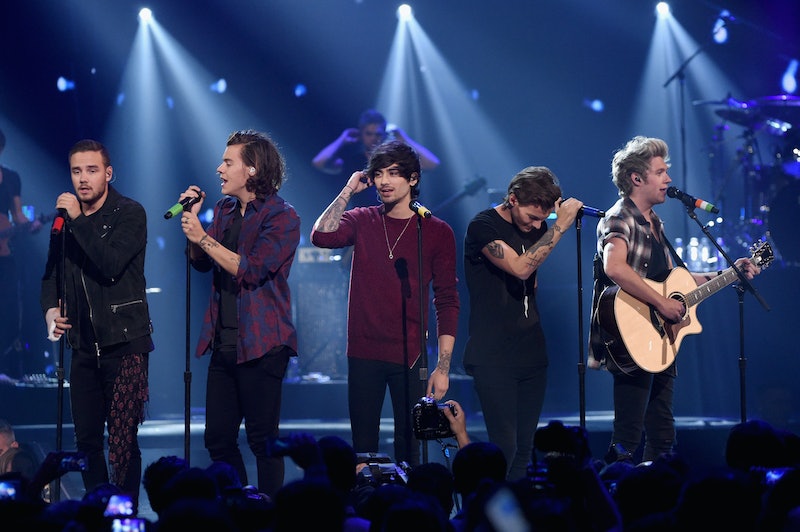 If 2014 did anything for the world of top 40 lovers, it made us all free to admit that we're really, really into One Direction. From super saccharine teen dreams to legitimate pop stars, and dare I say it... artists, One Direction made big strides this year. Their appearances on Saturday Night Live and The Tonight Show with Jimmy Fallon earned their late night comedy creds, they supported their LGBT fans in big ways, and they released their best album to date. Everyone also wanted Harry Styles and Emma Watson to be in love and lost their collective minds over a single strand of Zayn Malik's hair. They've officially reached peak boy band fame.

Though the fellas have only been around since 2010, they've already conquered the entire universe with their undeniably catchy tracks. So when exactly will their bubble burst? Only time will tell. With rumors buzzing about members leaving and Zayn getting engaged, you can't help but wonder if time is ticking for One Direction. Though, their intensely devoted fanbase would tell you otherwise. Their future success has nothing to do with whether or not their fans would stay by them (because, duh), but more so based on whether or not 1D gets bored with it and moves on. There's also always the possibility of shiesty record deals, because the history of boy bands will tell you those happen ALL OF THE TIME.

So what will happen if and when Harry, Zayn, Liam, Niall, and Louis move on? Here are some highly scientific predictions:

Malik's got the bad boy member thing down. Not only could he blow the roof off of the hair modeling industry, he could do pretty darn well as a solo artist focusing on down-n-dirty club anthems. Just think Nick Jonas, but with hopefully better music videos. So long as he didn't leave 1D by calling the rest of the fellas, "Jealous twits," or something of the sort, his fans will follow wherever he may go. He may never reach Justin Timberlake heights, but more of a Jordan Knight-level of longevity.

Future Success Score: 4 out of 5 snaps.

Kid-tested, mother approved. Horan's the one with the approachable look and an acoustic guitar. But the world already HAS an Ed Sheeran! What's a dreamboat to do!? Thankfully for Horan, he's got a pretty cheeky sense of humor. I smell a comedy album and a toe-dipping into the world of acting. If nothing else, he'll probably move to the Irish countryside post-One Direction, and have a lovely studio where future indie stars go to record. Ah, the life of the artistic soul.

The man's got "presenter" written all over him. If he's not a judge on Britain's Got Talent, The Voice, or X-Factor... or you know, some other reality talent competition of that ilk, then he's destined for some other form of TV hosting. He's England's Mario Lopez! JUST LOOK AT THE HAIR!

Future Success Score: 3 out of 5 snaps.

If he doesn't go model for Burberry, he'd be doing the world a great disservice. If the music career ever comes to an end, he's already got a highly lucrative backup: football (or "soccer," if you will). He's not only partial owner of the Doncaster Rovers, he's on their reserve list of players. So long as he doesn't spoil it with some terrible reality series, Tomlinson will be doing juuuuuuuust fine whether he's in or out of the spotlight.

When Kristen Wiig is dressing up like you for late night talk shows, you know you're here to stay. Styles is already the most famous member of the band. In fact, if you were to ask your Average Josephine to name anyone in One Direction, Harry Styles would probably be the only name you hear. He's a celebrity beyond his attachment to 1D, so the sky is really the limit with this one. Think Justin Timberlake-levels, but with an accent, better hair, and a collection of long coats. His own hosting of SNL in 3...2...1D (GET IT!?)

Future Success Score: 5 out of 5 snaps.