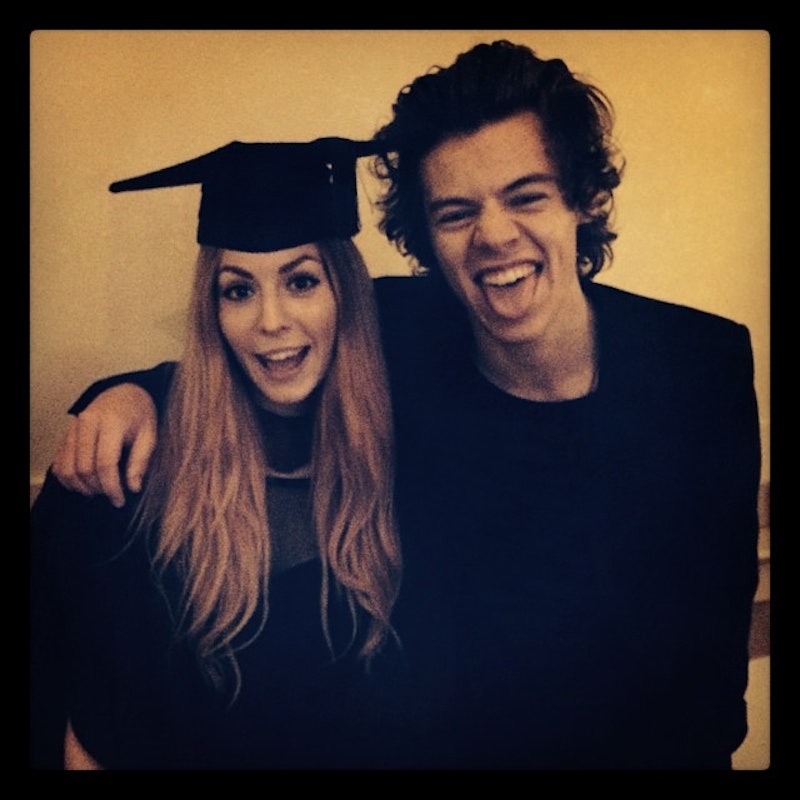 The world would be far less cruel if Harry Styles had several identical and musically talented brothers, but alas, he does not. What he does have? An adorable older sister named Gemma, and if you aren't already following her on Twitter, you definitely should be. Where Harry's tweets are adorable and occasionally nonsensical, Gemma's basically make you feel like you wish she was your best friend. Whether she's detailing the struggles of when she went sober in October for cancer research or freaking out over Ashton Kutcher and Mila Kunis's adorable relationship, Gemma Styles' Twitter proves that she is basically all of us.

In case you weren't even aware that Harry has a sister, you have a lot of catching up to do, my friend. Gemma is 24 years old, a recent graduate of Sheffield Hallam University with a degree in science education, and she and her famous brother are very close. In fact, Harry has Gemma's name in Hebrew tattooed on his shoulder, which is the sweetest thing I've ever heard. And in case you weren't aware, Gemma is responsible for some of my favorite pictures of Harry. For example, it is because of her that this photo exists, straight from her Instagram:

Are you ready for this? If these tweets don't convince you that you've been paying attention to the wrong Styles, I don't know what will.

Coffee is an absolute necessity. And in case you were wondering, a biro is the British name for a ballpoint pen.

Anyone who loves both Gilmore Girls and Friends gets an A+ in my book.

Gemma is a true innovator. BRB, buying KitKats so I can try this myself. Or, you know, just eat the KitKats.

Because who's ever felt more like an adult than the day they realize they can cut labels out of their clothes (and also their mattress) without getting arrested?

As the owner of two cats who love to shed, I totally understand this. And unfortunately, the vast majority of my clothing is black or grey.