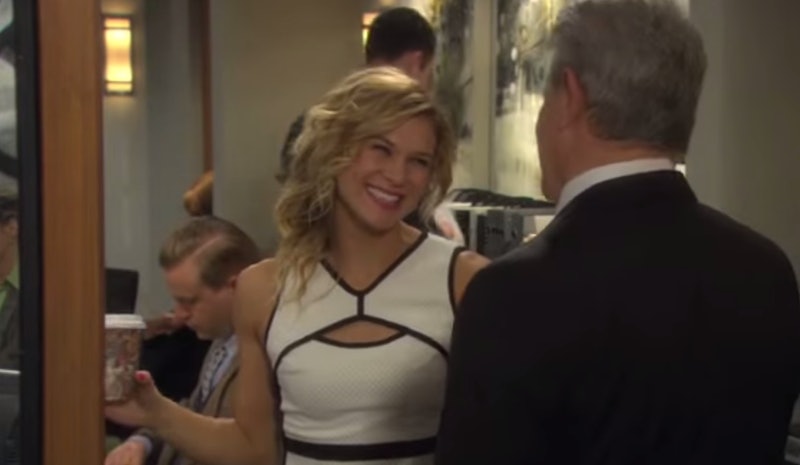 Even as a hardcore feminist who's well aware of the massive gender gap behind-the-scenes in Hollywood — especially when it comes to female writers, female producers, and female directors — seeing the extent of sexist writing in television still manages to astonish me. It's the end of 2014, and though we've made so much great progress with feminism this year, some of the dialogue and jokes in modern sitcoms don't seem to reflect that. Instead, with insinuations about how every woman dreams of marriage (not true!) and jokes about women insulting and slut-shaming other women for their achievements (ugh), some seem more like they're just stuck in the '50s, but with iPhones or something. It's tragic — and exactly why this clip is just so great. Created by comedian Cynthia Kao, the clip reimagines popular sitcoms of today as if feminists rewrote some of the dialogue.

While I have nothing against these shows included (honestly, Selfie was a genuinely cute show!), it's quite disarming — and even a bit funny — to see how easily a lot of the dialogue promoting gender stereotypes and sexism could be so easily replaced with great dialogue that supports all women, and remains funny as well.

Can we just agree that 2015 be the year of the ladies in television? Because, seriously: A study in 2013 showed that only 25% of television writers were female (a decrease from previous years!) and that is just unacceptable — this, after all, is proof.

More like this
Women Around The World Are Cutting Their Hair In Solidarity With Mahsa Amini
By Darshita Goyal
Self Esteem's “F*cking Wizardry” Is An Anthem About Knowing Your Worth
By El Hunt
UK Viewers Will Have To Wait To Watch The Handmaid’s Tale S5
By Maxine Harrison
15 Offensive AF Jokes In 'Friends' That Really Aren't OK
By Tolly Wright, Bustle Editors and Meguire Hennes
Get Even More From Bustle — Sign Up For The Newsletter