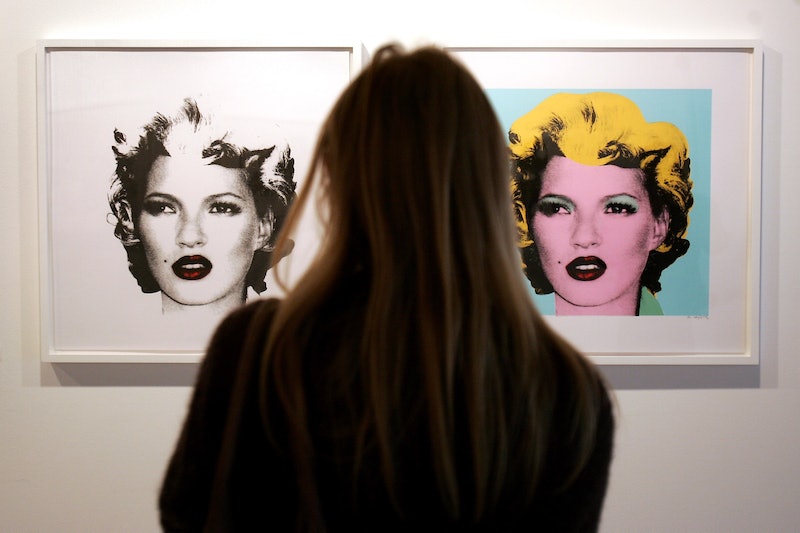 I woke up one morning and there it was. At eight years old, my first reaction was to wash my face, grab my towel, and attempt to scrub it off. No luck. I leaned in close to the mirror, only to be confronted with a brown dot on the lower right corner of my chin. Measuring at approximately an eighth of an inch, it wasn’t huge — but it was definitely noticeable. In my close inspection, I found that there was no bump and no raised skin, so it couldn’t have been a mole or a wart. I thought perhaps it was a pimple. But no señor — not even the worst blackhead in the world is that dark or big. Then I realized what it really was: a beauty mark.

Since that fateful day, more beauty marks have sprouted on my face: A few on my cheek, one near my eyebrow, and another on my jaw, have all joined the company of the brown particle that first appeared on my chin. As I grew older, and as more of these dots took residence on my face, I became less and less surprised by their presence. Subsequently, I no longer inspected each one to see if it was a "mistake" or a blemish, nor did I try to scrub them off with soap (in the hopes that the suds would act as erasers). As I grew older, they became a part of my facial features, and I learned to accept and embrace them as inherent to my unique self. And (even though this will always be annoying), I learned to ignore the question I get every so often: “What’s that on your face?”

In a way, beauty marks define themselves. They’re naturally-occurring spots on the surface of skin that enhance (if you ask me) your individual beauty and unique features. They can appear on your hands, on your chest and even on your chin. Beauty marks add more characteristics and details to one’s physical appearance, beyond just a temporary material embellishment like red lipstick or winged eyeliner. Without a doubt, they were named as such because they’re not exactly something you can wish for or create yourself (even though TopShop’s freckle pencil can give you the option to try, with the tedious chore of having to wash it off and draw it on again, of course). So essentially, you don’t choose the beauty mark; the beauty mark chooses you.

Whether or not I would have chosen to have a beauty mark-filled bod, I was blessed in having the most distinguished ones on my face. And while I do have to endure that aforementioned annoying question every once in a while, I wholeheartedly believe the brown marks on my face add more personality to my look. That’s not to say I think people without beauty marks have less personality, or are not as aesthetically beautiful. But as for those who do don the spots in visible areas — who own them, mold them into part of their image, and make others who don’t have beauty marks only wish they could command their own skin to sprout one of their own — well, I'm into it!

AS FOR THE SPOTTY HISTORY OF BEAUTY MARKS (PUN INTENDED)

There are many beliefs and theories surrounding beauty marks and their significance, although they’re hard pressed to be proven true. The Imperial Chinese believed that beauty marks could foretell your fortune and future depending on their placement and hue, as a sort of divination. In Medieval Europe, beauty marks were considered evidence of demonic possession and a sign that demons may have been manifesting themselves in human form. By the the Renaissance, women who strived for ghostly pale skin (which was considered the peak of exquisiteness at the time), would also cover their blemishes with dots, disguising them as beauty marks. But none of these interpretations are as fascinating, perhaps, as that of the 18th century beauty trend: Using felt patches (or mouches) to mimic the look of beauty marks. At the peak of this trend, the mouches were even shaped into elaborate horse drawn carriages rather than prototypical circles.

When we consider more recent examples of these spots, it becomes clear that beauty marks have continued to be accepted rather than branded as demonic. Women — and even some men — have flaunted beauty marks to solidify that one-of-a-kind image. From foreign beauties to the girl-next-door-turned-Hollywood-bombshell, plenty of different personalities, races and ages have embraced their beauty marks in a way that has them memorable through the decades. Some that come to mind include Elizabeth Taylor, Cary Grant, and Robert DeNiro. And quite arguably the most important beauty mark of all time: Marilyn Monroe's.

Monroe’s beauty mark sat below her cheek, near the tip of her lip. It shined and sparkled when she smiled, and established an even more sensual tone to her womanly figure and plush lips. It was so iconic to her everlasting sex appeal that a piercing in the same place as her beauty mark was dubbed the "Monroe." Her beauty mark was not so much a distraction to Monroe’s beauty or her projects as an actress; rather, it accentuated her best features and added a sexy uniqueness that distinguished her from, say, Lauren Bacall or Katharine Hepburn.

Monroe’s contribution to the understanding of beauty marks shows that they have the potential to elevate and maximize the confidence of their bearer, allowing the person to take ownership of a special kind of self-esteem. This is certainly something we see when looking at more familiar Hollywood stars on red carpets today.

Since Monroe, there have been many new additions to the list of celebrities with beauty marks. Some, you’re probably quite familiar with, like Eva Mendes, Blake Lively, Cindy Crawford, and Natalie Portman. Others you may not have even noticed have beauty marks: Think Scarlett Johanssen, Karlie Kloss, Miley Cyrus and even Enrique Iglesias (though I bet your subconscious noticed). And then there are celebrities who draw them on, like Lady Gaga, Dita Von Teese, and Madonna (in her “Like A Virgin” phase, anyway).

Although most of these celebrities won’t necessarily be remembered for their beauty marks, a la Monroe, that doesn't stop them from being striking features. Despite the fact that their skin will never be completely “clear,” the beauty mark proves that blemishes are often part of a person's aesthetic appeal. And that goes for any kind of "imperfection," be it a brown dot, a group of freckles or a mole. It seems simple, and yet there still exists a strange kind of discrimination against our spotty friends — at least when it comes to representation of the mark in the fashion and beauty industries.

Bustle’s latest Photoshop beauty experiment asked photo editors in different countries to edit a headshot according to their perceived standard of beauty. The majority of editors sent back the photographs with the subject’s beauty mark edited out. Unfortunately, this is not unheard of when it comes to altering images. Photoshop and other photography editing tools have the power to manipulate everything about a person. It happen countless times with women’s bodies and skin color. Now, beauty marks seem to have entered the ranks as another victim.

Cindy Crawford’s first Vogue cover was sans her signature mole (and in the years since, she actually underwent beauty mark removal). The moles on Katy Perry’s neck magically disappeared for her cover shot on Rolling Stone’s August 2010 issue. And most recently, Iggy Azalea’s promotion shots for her appearance on Saturday Night Live were edited to remove the beauty marks by her mouth and below her right eye.

SO DO BEAUTY MARKS REALLY DEFINE THEMSELVES?

Earlier on, I said that beauty marks define themselves. Keep in mind, however, that I have them, so I am something of a biased source. With that being said, there is more than enough evidence to show that beautiful and talented people with beauty marks have used them as a way to define themselves. Not because "beauty marks are the best way to define a person," but because they maximize one's individuality, and showcase a certain uniqueness. So why are these so-called blemishes still being removed and edited out, even with the high profile celebrities out there aren't afraid to embrace them?

Maybe beauty marks are too rare and uncommon to be considered "truly" beautiful. Maybe they’re edited out of photos because they are too much of a distraction, or pose the threat of being perceived as a mistake on the publisher’s end. Maybe they’re still generally considered the mark of demonic activity! OK, that last suggestion is probably too far-fetched to have any merit. But to call a beauty mark a blemish or a mistake is the equivalent of telling a tree not to grow. They are individual characteristics, and should be embraced. They are completely and utterly your own.

The young version of myself may have initially thought to scrub off the brown spot on my chin with soap until it gave in and disappeared. Now, I know better.