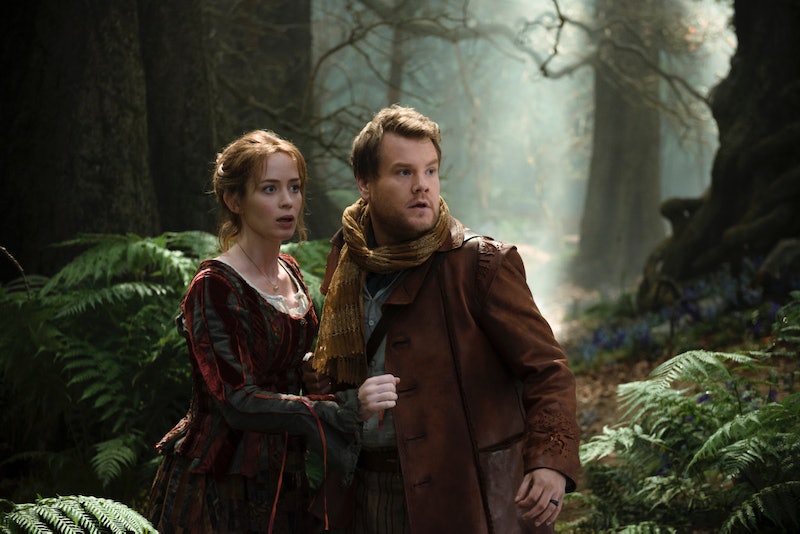 If you're a diehard fan, you've already seen the Stephen Sondheim musical, Into the Woods, perhaps more than once. But when it comes to the clever and often dark world of these bizarro fairytale characters, there's no such thing as too many viewings. Because just like Little Red Riding Hood when she emerges from the Wolf's stomach, you learn and notice something new with each subsequent viewing. Some fans of the musical are disappointed with Disney's big screen adaptation: Why did Rapunzel live? And why didn't Cinderella's Prince sleep with the Baker's wife? But this is Disney after all.

For the medium that it is, and with Disney's family values in mind, the 2014 execution boasts an impressive cast (who knew Chris Pine had such pipes?) and was a whole lot of fun to watch unravel on screen. And if you're still not satisfied, there's one thing the musical can't take away from Into the Woods enthusiasts — the lyrics. So here are 12 lyrics from the more than two hour spectacle that true fans of the musical will always cherish.

"No One is Alone"

Sometimes people leave you.Halfway through the wood.Others may decieve you.You decide whats good.You decide alone.But no one is alone.

"On the Steps of the Palace"

Agony!Far more painful than yours,When you know she would go with youIf there only were doors.

And he showed me thingsMany beautiful things,That I hadn't thought to explore.They were off my path,So I never had dared.

What do you leave to your child when you're dead?Only whatever you put in it's headThings that you're mother and father had saidWhich were left to them tooCareful the things you say

Stay with me,The world is dark and wild.Stay a child while you can be a child.

"Giants in the Sky"

And you think of all of the things you've seen,And you wish that you could live in between,And you're back again,Only different than before,After the sky.

Let your hesitations be hushed.Any moment, big or small,Is a moment, after all.Seize the moment, skies may fall

More like this
Twitter Is Unravelling Over Wolverine’s Return For 'Deadpool 3'
By Darshita Goyal
Self Esteem's “F*cking Wizardry” Is An Anthem About Knowing Your Worth
By El Hunt
The 50 Most Powerful Characters In The Marvel Universe, Ranked
By Johnny Brayson and Nola Pfau
Lin-Manuel Miranda & Tituss Burgess React To 'Little Mermaid' Casting Backlash
By Radhika Menon
Get Even More From Bustle — Sign Up For The Newsletter