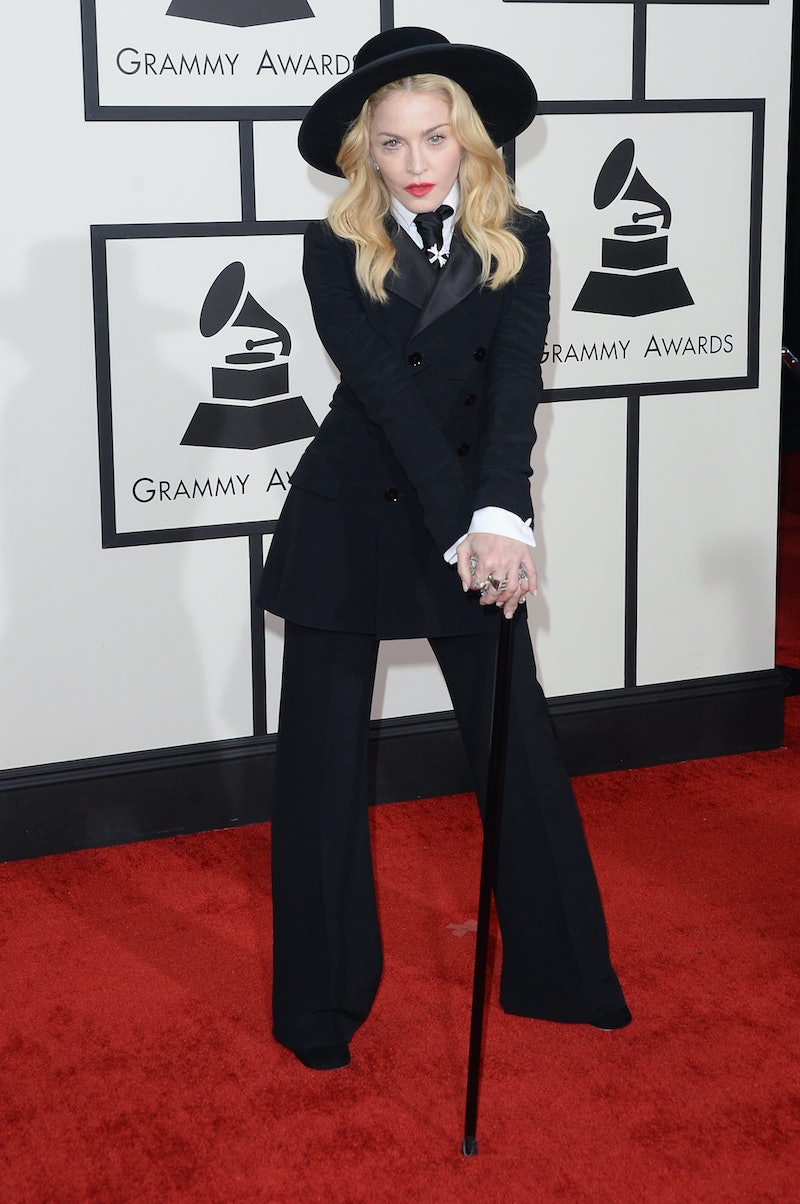 We're on the edge of the year 2015 and in the world of pop music, we are still pitting women against women, which I can unfortunately say does not come as a surprise. Could anyone talk about Ariana Grande without saying she was a Mariah Carey wannabe? Or how about Nicki Minaj and her constant "ripping off" of Lil' Kim? And just before the year ends, Madonna fans decided to kick a dead horse and began whispering that Madonna's latest leaked track, "Two Steps Behind," was about Lady Gaga.

During a Twitter Q&A this week, Madonna's manager Guy Oseary denied that this track is about Lady Gaga or "anyone in particular." In addition, Madonna took to her Instagram to share that "we still live in a world that discriminates against women." It seems that Madonna is well aware of the thoughts about "Two Steps Behind," which leaked in August and features lyrics like, “You’re a copycat, get back/I’m always on your mind."

Creating beef between two female artists is not new to the industry, and especially not when it comes to Madonna and Lady Gaga. Although they have had their unflattering (yet fairly tame) comments to each other in the press over the years, it really seems like any supposed rivalry between them is long gone, and Madonna's Instagram explanation shares just that.

Since the beginning of her career, Lady Gaga has constantly endured comparisons to Queen Madge, for her similar stage outfits, aesthetic, and of course, music. Back in 2009, both of the ladies appeared in a "fake catfight" skit on Saturday Night Live, in which they joked around about their similarities. After they started fighting, they were forced to sit on a couch and chat, with Gaga opening up with, "Guess what Madonna? I'm totally hotter than you," and Madonna retorting, "What kind of name is Lady Gaga? It sounds like baby food." Ouch. Well, at that point, it seemed all in jest and no feelings were hurt, right?

It wasn't until 2012 that rumors of a feud really heated up when Gaga released her hit "Born This Way" and people recognized how similar the song sounded to Madonna's 1989 hit, "Express Yourself." Madonna cheekily commented in an interview with 20/20,

I certainly think she references me a lot in her work. And sometimes I think it's amusing and flattering and well done. There's a lot of ways to look at it. I can't really be annoyed by it …because, obviously, I've influenced her.

OK, so Madonna does admit she thinks Lady Gaga's work is "well done," but I can't lie and say that this interview didn't birth the shadiest gif of all time when she called Gaga's song "reductive."

Lady Gaga went on to comment on the persistent rumors in 2013 in an interview with MTV, in which she shared,

It’s silly. There’s always this pissing match, "Did she take her torch?" [and] "Is she the new her?" "Is she going to outlast her?" … There’s this thing with some people that I’m a threat to the throne... I have my own and I don’t actually want a throne at all.

Looking back at the history, one can say that Madonna certainly brings up Gaga more often than Gaga brings up Madonna, but like they say in show business, no press is bad press and in the end, they're two pop stars who need to be in the spotlight.

Although I don't think we will ever hear any of these ladies give a directly positive remark about each other (remember when Madonna said she "loved Gaga" because "imitation is the highest form of flattery"?) at least we know that there is no ill will and that we should just move on to more important matters. You know, like seeing them as two incredibly talented, record-breaking, strong and beautiful women. I can stand behind that.