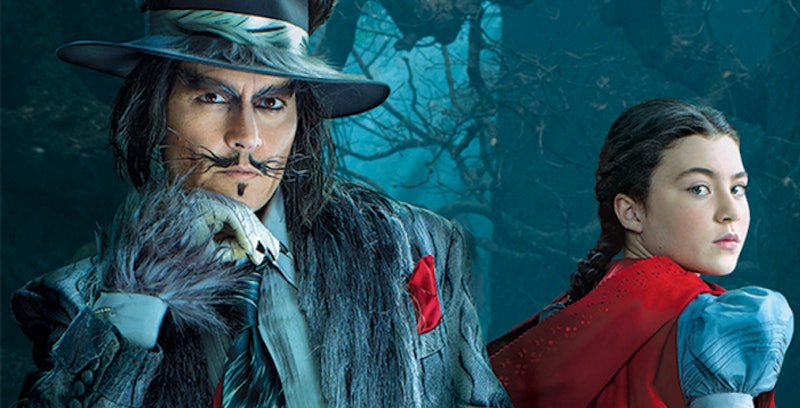 You've seen the stage musical, and now you've seen Disney's big screen adaptation of Stephen Sondheim's Into the Woods . You have your favorite musical number nailed down and you can sing all the lyrics to both parts of "Agony," but there might be a few things you have yet to learn about the 2014 musical. With its opulence of talented stars, big budget, and gorgeous English scenery, you might be game to watch it again. And if you do, take stock of these 23 tidbits you might not have noticed or known during the first viewing. Because just like the fairytale characters that break their Grimm brothers stereotypes, there are many layers to a well-crafted adaptation.

Emily Blunt plays the Baker's Wife, a woman who wants for a child but is cursed with being barren. Ironically, after the first week of being cast, Blunt found out she was pregnant in real life with husband John Krasinski.

Many of the deaths in the on screen adaptation were changed or cut entirely. For example, Jack's mother is actually beaten to death with a cane, not simply pushed.

After turning 40, Meryl Streep implemented a "no witches" rule after being offered three witch roles in one year. But for Stephen Sondheim, she changed her mind.

This is the second film where Meryl Streep's character shows malice to Emily Blunt's. The first was, of course, The Devil Wears Prada.

Emily Blunt's character of the Baker's Wife is crushed by a giant tree in the original, and falls off a cliff in the adaptation.

And Rapunzel, who lives happily ever after in the Disney version, dies after being trampled to death by the Giant.

Can't place James Corden as the Baker? You've seen him sing before, in another 2014 musical playing Kiera Knightley's best friend in Begin Again.

Other actresses that were up for the role of the Witch included: Catherine Zeta-Jones, Penelope Cruz and Nicole Kidman — all actresses director Rob Marshall had worked with in the past.

Johnny Depp and Rob Marshall have worked together in the past on Depp's sword-swinging flick, Pirates of the Carribean: On Stranger Tides.

Though one of the most easily recognized faces in the film and promotional materials, Johnny Depp appears in roughly five minutes of the entire two-plus hour film.

To audition for the role of the self-centered Prince with a wandering eye, Chris Pine sang "Fly Me to the Moon" by Frank Sinatra.

Rob Marshall initially asked Emma Stone to play Cinderella, but she she didn't think she had the vocal range. She jokingly asked Marshall if she could, instead play Jack.

Lucy Punch, who plays an evil stepsister to Cinderella, played a not-so-nice stepsister three times before, in 2004's Ella Enchanted, again in Cinderella 2000, and a once more in a BBC version of Cinderella.

"Hello Little Girl" is essentially a song about pedophilia. Producers figured the double-entendres wouldn't be noticed by little children, but decided to give the song a quicker, jazzier tune to partially remedy the problem. Music supervisor Michael Higham told the Hollywood Reporter of the changes: "We emphasized the woodwinds to make it feel a little lighter, especially the flutes. And we just made it a little jazzier — played more on the walking bass line. Inherently, when it has a jazz feel, it just feels lighter."

Lilla Crawford, who plays Red Riding Hood, starred in the title role of Annie on Broadway.

30 Rock alum Tina Fey auditioned for the role of the Baker's Wife.

Barack Obama inspired Rob Marshall to do Into the Woods for the big screen, after he (likely not on purpose) said "You are not alone. No one is alone," during an address.

Anna Kendrick said the production pieces were so real looking and extensive, she and Chris Pine got lost one day and had to implement a buddy system for navigating the set.

Rob Marshall hates green screens and CGI, meaning Chris Pine had to stand in the background of Anna Kendrick's "On the Steps of the Palace" — completely still and quiet — for two full days of shooting.

It isn't until the moment she is killed that you see the Giant's full face.