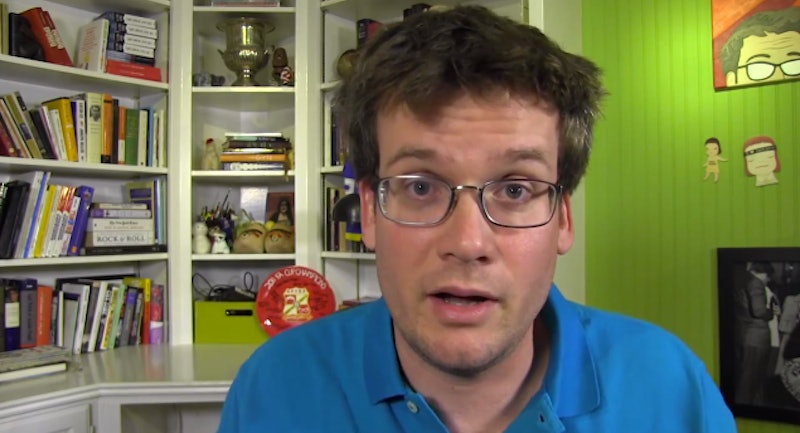 Let's get one thing clear right off the bat: I don't believe that a time in which black men are being killed with little to no consequence for their killers is a time in which white voices should be prioritized. But there's a small "but" coming, and that "but" is that I also believe that we're in a time where as many people as possible should be speaking up as loudly as possible, because it is our responsibility to not let the world continue on as-is. That but is also that John Green — author of The Fault In Our Stars , person present on the TIME 100 influential people list, and Vlogbrother — is a person with a large, attentive audience, and his use of that audience in a recent video in which he laid out how undeniable institutional racism is in the United States is what more public figures should be doing right about now. Every voice, when thoughtfully used, helps.

And perhaps more than that: Videos like these gives us all more ammo for those frustrating Facebook debates with acquaintances and family who don't realize they're racist.

Green's hardly the first person to lay out the facts of racism in video form, but every new one of these laying out the cold, hard, tragic facts is something I am grateful for. Green made this video directly in response to the recent polls that said that about 75 percent of white Americans did not believe there was racial bias in the criminal justice system. He lays out a bunch of the facts that I've been trying to use to convince people to pay attention for years now, and especially in recent months. The efforts to get — and keep — people confronting racism in America can feel downright Sisyphean, and so any well-researched, well-presented video can help make the weight of it all feel a little less heavy. Not much, but it helps.

I found Green's video through the twitter of Akilah Hughes, an awesome Youtuber who you should really follow both on Youtube and at her new gig at Fusion. And in fact, Green seems to know that his voice shouldn't be the one that has the most impact here: Along with his video he included a playlist of Youtube videos (including one by Hughes herself) discussing race and racism.

Here's one of them, featuring a number of Youtubers of color:

And another, by Franchesca "Chescaleigh" Ramsey, someone whose Youtube channel deserves some binge-watching:

I highly encourage you to watch all of them. And more.

Here's Samuel L. Jackson calling for his fellow celebrities to take to this cause the way they took to the ALS Ice Bucket challenge:

More voices need to be talking.

And I'm gonna be dropping this one all over my Facebook, targeted at a select few people who barely understand what racism even is:

More like this
Britney Spears Shares Unknown Details Of Conservatorship In New Voice Notes
By El Hunt
Everything To Know About Taylor Swift’s 10th Studio Album, 'Midnights'
By Grace Wehniainen and Jake Viswanath
Twitter Is Freaking Out Over Rihanna’s 2023 Super Bowl Halftime Show Announcement
By Stephanie Topacio Long
The Spice Girls Just Dropped A Brand New Music Video
By Sam Ramsden
Get Even More From Bustle — Sign Up For The Newsletter