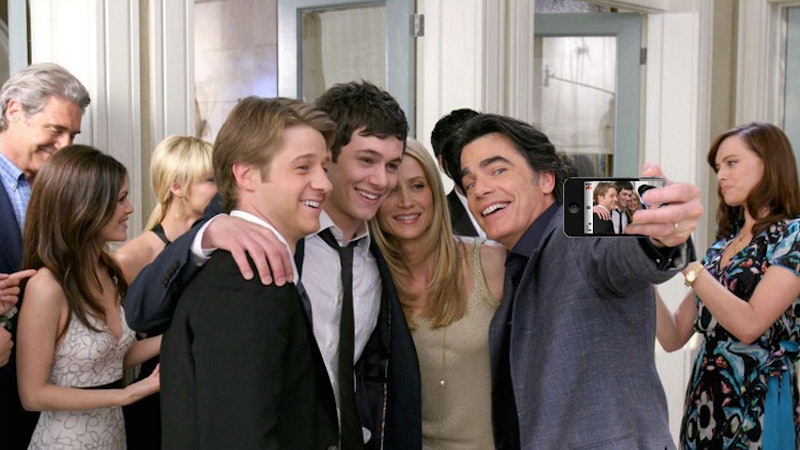 It has been over 11 years since The O.C. premiered, and we were transported into the amazing — albeit dramatic — lives of Orange County youth. This show was nothing like the life I lived at the time of the premiere (or still do live), so thinking that there were teenagers out there going to fabulous parties, meeting mysterious boys from Chino, and inventing holidays... I was intrigued. And although it was a long time ago, we're still talking about The O.C. today (no Adam Brody, we will never stop asking about Seth Cohen).

One of the best O.C. episodes of all four seasons (even though the fourth season DIDN'T COUNT, because Marissa Cooper) was the New Year's Eve episode, "The Countdown," from Season 1. Not only did it host an epic countdown miracle of Ryan running up a million flights of stairs to just get to Marissa in time for a New Year's kiss, but it also was a pivotal episode for Summer, when she realized she wants to plant a New Year's kiss on Seth Cohen, not that random at Oliver's hotel party (shout out to crazy Oliver!).

So with the new year just days away, it isn't that crazy to wonder what The O.C. characters would be doing for NYE in 2014. For starters, Sandy Cohen wouldn't be TAKING A SELFIE with a Canon camera in 2014 (photo above), he'd be all over the iPhone 6 Plus, 100%. Here is what I think everyone would be doing to ring in 2015, but be warned, there are spoilers ahead.

Ryan isn't new in town anymore, but he still doesn't care to be at the cool "scene" to ring in the New Year. He starts his night out at some really cool looking house that he designed, flipping between a marathon of Fargo and watching Taylor Swift perform in New York (he just can't get "Blank Space" out of his head) but he quickly realizes even if Marissa Cooper is his next mistake, he needs to get to her ASAP. Thanks to the Cohen's Range Rover fleet, Ryan is quickly on his way to find Marissa and share a New Year's kiss with her. Unfortunately, she's at a concert without him and has ZERO cell reception... ARGH so frustrating!

2014 Marissa IS ALIVE, first of all, and nowadays she is really into music festivals, like Burning Man. After her time at sea with her dad (you know, the trip she never went on because of the car accident?), she opened her mind to taking in cultures and accepting everyone for their true and honest selves. She is ringing the new year in with her festival friends at a concert of an indie group you've never heard of (but most definitely will hear of once she starts talking your ear off about how she was "the first to like them."). Obviously she and Ryan are supposed to share a New Year's kiss, but the venue she is at has no cell reception, so Ryan can't iMessage her that he is on his way. In between "songs" (they're more like soundscapes), Marissa hears Ryan calling out for her and in a smoky haze, sees him shoving his way to her through the flower-crown folk. Don't worry, it works out, and they share a New Year's kiss.

Seth is so over New Year's Eve parties, so you can find him staying in tonight. Plus, he needs to ironically live-tweet the Ryan Seacrest New Year's Eve special for his thousands of followers that he got organically, because Seth Cohen doesn't pay for followers. Even though Summer isn't happy that Seth wants to stay in for the night, she doesn't mind since she is super pregnant and "looks like the ball dropping in Times Square" (she says).

The Cohen's are doing what they usually do on holidays... hosting a fabulous party at their home. With Michael Buble piped into the sound system, and appetizers that Sandy attempted to make (he's really taken to Pinterest since his retirement) being passed around, the Cohen's and their friends (yes, Julie Cooper-Nichol is even in attendance with Ryan's dad).