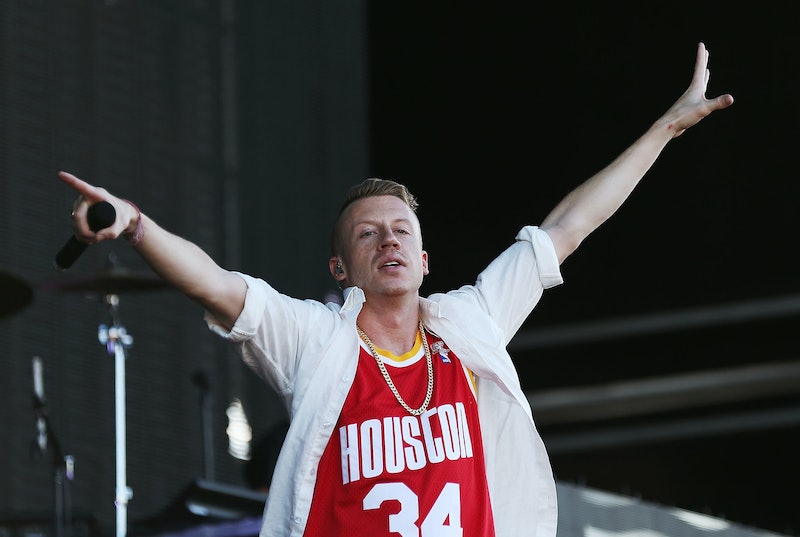 I experienced a lot of Macklemore-related rage in 2013, but by some miracle, the rapper (and Ryan Lewis, who for a while I thought were one person and not two separate dudes) has been relatively under the radar in 2014. It looks like, though, just in the nick of time before year's end, Macklemore is trying to come back and be relevant, but to me, it just rings as more of the try-hard behavior that he's guilty of. In an extended interview the "Thrift Shop" rapper gave to Ebro in the Morning on NYC radio station Hot 97, Macklemore discussed race relations and white privilege, and addressed the text message he sent to Kendrick Lamar after the Grammys last year. Azealia Banks gave an impassioned and angry interview on the same radio station last week about Iggy Azalea's appropriation and the public's failure to hold her accountable for it.

Both Slate and Rolling Stone praise Macklemore for what they call a "surprisingly insightful interview." The rapper said of white privilege:

White people can turn off the TV when we're sick of talking about race. White, liberal people want to be nice. We don't want to be racist. We want to be, "Oh we're post-racial. We don't want to talk about white privilege and it's all good, right?" It's not the case. Silence is an action and it's my privilege that I can be silent about this issue. And I'm tired of being silent about it. We have to get past that awkward stage of the race conversation. As a white person, we have to listen. We need to direct the attention to the people of color that are on the ground mobilizing and listen to those people.

While I appreciate somewhat that he acknowledged that attention must be paid to the relentlessly strong people of color, especially black people, who have come out to protest the deaths of Eric Garner, Tamir Rice, Mike Brown and countless others, I'm not really here to listen to Macklemore purport how he is going to be active in the fight against white privilege when he still and always will benefit from it.

It's so tiring when white artists in the world of hip-hop get praised for their commentary on race when they are still essentially appropriating the very culture that they are trying to respect but have no real business being a part of. Azealia Banks was slammed for her interview on the same station in which she specifically called out Iggy Azalea for her cultural misappropriation of black culture and the erasure of black women in hip hop for favor of a white Australian woman. She got emotional when she talked about how frustrating and hurtful it is when white female artists in hip hop get praised and complimented for being strong women while they are appropriating elements of black culture, and black women are admonished for the same actions and behavior.

I don't find Macklemore's interview insightful, I find it borders on braggy. He went on to say: "Why am I safe? Why can I cuss on a record, have a parental advisory sticker on the cover of my album, yet parents are still like, "You're the only rap I let my kids listen to."...If I was black, what would my drug addiction look like?" It angers me in the same way that #CrimingWhileWhite did — it becomes an even more painful reminder of the bigoted double standard in the world of music.

But what really put me over the edge with this interview is when the rapper discusses the place of white people in hip hop:

You need to know your place in the culture. Are you contributing or are you taking? Are you using it for your own advantage or are you contributing? I saw a tweet that said, "Hip hop was birthed out of the civil rights movement." This is a culture that came from pain and oppression. It was the byproduct [of white oppression]. Just because there's been more successful white rappers, you cannot disregard where this culture came from and our place in it as white people. This is not my culture to begin with.

That's all well and good, but that kind of criticism of the place of white people in hip hop is a glaring contradiction: if he's acknowledging that this isn't his culture, why won't he admit that he has still profited from appropriating it? Why are his opinions about hip hop more important than black artists'?