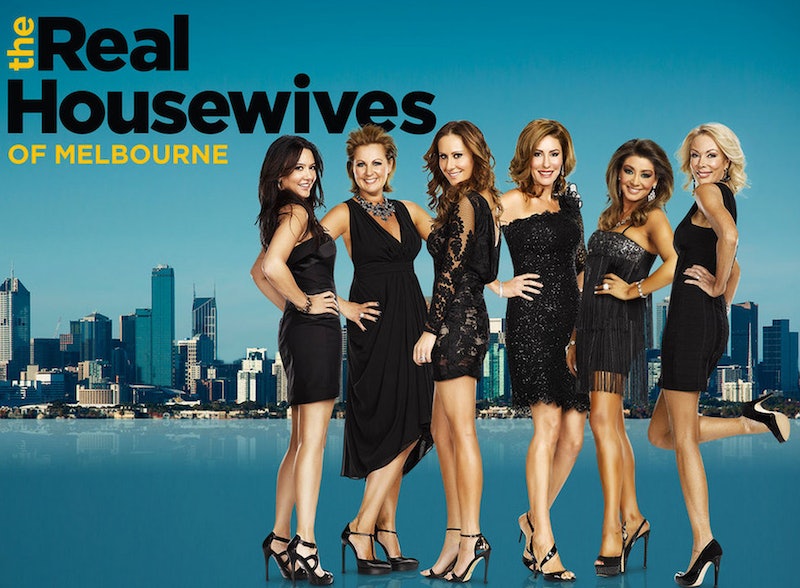 I have good news and bad news. The bad news (let’s just get it over with, shall we?): I do not know when the exceptional Real Housewives of Melbourne will make its triumphant return to Bravo. Heck, I do not know if the second season of RHOMelb (not to be confused Real Housewives of Miami, aka RHOM) will ever air on Bravo. I may have to figure out a way to get Australian TV channel Arena. (Is that even a possibility, or am I dreaming?) The good news: There is a new trailer for RHOMelb Season 2 on the Internet. And it is, as the Aussies say, grouse.

Set to a cover of Nancy Sinatra’s “These Boots Are Made for Walkin’", the RHOMelb cast struts oh-so glamorously through an airport terminal. They leave a trail of stunned common folk in their wake. And then, it happens: Gina Liano, Jackie Gillies, Janet Roach, Lydia Schiavello, and Chyka Keebaugh run into Season 2 newbies Gamble Breaux and Pettifleur Berenger. (That's right, there will be a whopping seven Housewives.) Hilarity/more airport strutting ensues.

Here are the 11 moments from the Real Housewives of Melbourne trailer that have me hopin' Season 2 comes to Bravo soooooon:

When this woman gasps

When these women freak out

When we zoom in on Gina’s flawless eye makeup

When this guy loses control of his face

When the elevator door reveal happens

When Jackie makes this sassy face

When these two gasp

When the entire cast struts it out together

HNNNNNNNNNNGH I am going to write so many angry letters if Bravo doesn't give us RHOMel Season 2.