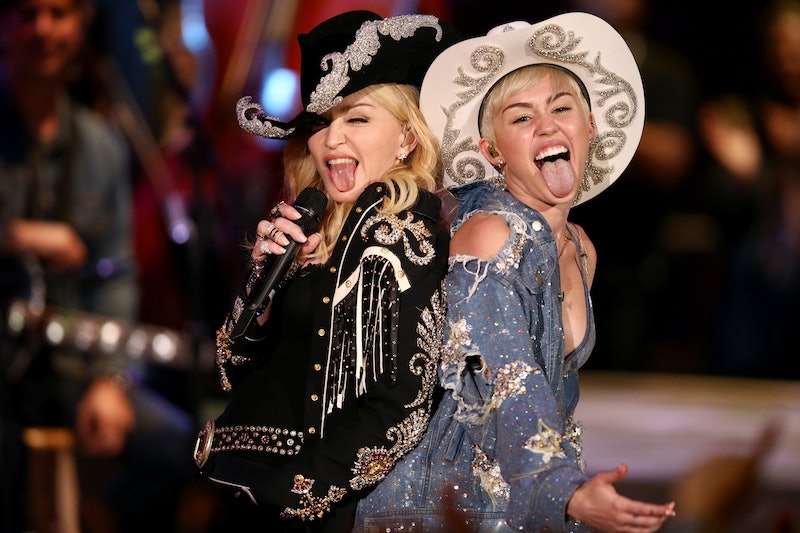 Could it possibly be true? Is Madonna collaborating with Miley Cyrus on her upcoming new album, Rebel Heart ? It seems as though the two singers know something that we don't! On Sunday, Cyrus posted a fan-made version of the Rebel Heart cover artwork on Instagram using her own face instead of Madonna's. Later, Madge re-posted the photo with the caption: "Bitch i love you! #rebelheart." Hmm. Suspicious, indeed. Sadly, Madonna's Rebel Heart campaign has gotten off to a bit of a rocky start. Though the album's lead single, "Living for Love," wasn't supposed to be released until February, a series of online music leaks prompted the now 56-year-old "Express Yourself" hit-maker to rush the new song (along with five others) to iTunes earlier this month.

Unfortunately, since then, the leaks have continued. At this point, there are over 20 unreleased Madonna tracks online. None of them feature Cyrus' vocals, but that doesn't completely rule out the possibility of a duet (unfinished demos don't always include guest artists). Personally, I'm totally into the idea of the Queen of Pop collaborating with pop music's ultra-talented wild child. After all, the pair had a lot of fun together singing a mash-up of "Don't Tell Me" and "We Can't Stop" in January during Cyrus' MTV Unplugged special:

Of course, it's also possible that Madonna and Cyrus' recent Instagram activity is related to an upcoming performance at the 57th Annual Grammy Awards. When Billboard's Keith Caulfield told Madonna during a new interview that he could imagine her singing "Living for Love" with "various guests" at the 2015 Grammys, she replied: "Yes, that would be wonderful. That's possibly something that's gonna happen." Hmm, I wonder who else might join Madonna on stage? She was getting pretty chummy with Katy Perry earlier this year... I'm guessing that we'll have to wait until the ceremony airs live on Feb. 8 to find out!

Oh, and I'll definitely keep you posted about this Madonna/Miley collaboration business.

More like this
Everything To Know About Taylor Swift’s 10th Studio Album, 'Midnights'
By Grace Wehniainen and Jake Viswanath
Kesha Is Down To Be The Next Bachelorette
By Jake Viswanath
Dan Levy Appears In The Latest Teaser For The Weeknd's HBO Series, 'The Idol'
By Jake Viswanath
Beyoncé’s Special Tribute To Sister Solange Was Both Touching & Hilarious
By Stephanie Topacio Long
Get Even More From Bustle — Sign Up For The Newsletter