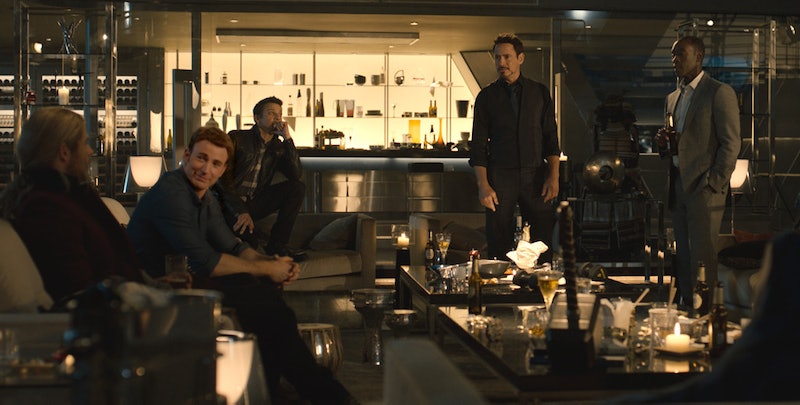 We might have a while to wait for the film to come out, but Marvel's Avengers: Age of Ultron has just released a new photo of the cast, and they look ready for business. The new photo shows Iron Man (Robert Downey Jr.), Thor (Chris Hemsworth), Black Widow (Scarlett Johansson), Hawkeye (Jeremy Renner), The Hulk (Mark Ruffalo), Maria Hill (Colbie Smulders), James Rhodes (Don Cheadle), and Captain America himself (Chris Evans) on a swanky yacht of some sort (totally Tony Starks, right?) with champagne near. But what's happening in this photo? It looks like they just saw the movie's villain Ultron, or maybe realized that they're parked next to Justin Bieber's yacht. Either way, equally alarming.

The upcoming film also stars Elizabeth Olsen, Aaron Taylor-Johnson, Idris Elba, and Tom Hiddleston, although we aren't technically supposed to know that Elba and Hiddleston will be in the film. Elba accidentally let the news slip that he and his Thor co-star would be reprising their roles from the 2011 film.

The film, which is set to release on May 1, 2015, was filmed earlier in 2014 and will be the sequel to the first Avengers movie, which came out in 2012. There are also plans to produce two other films in the Avengers series. Avengers: Infinity War Part 1 will be released in 2018, while Part 2 will be released in 2019. See the new photo of Avengers: Age of Ultron below.